I’ll come clean. Like most people defending their position on the Covid jabs, I used to start my apology with, ‘I’m no anti-vaxxer!’

Having probably received more vaccines than most, given I am both a doctor and fairly well travelled, I naively thought this approach might earn credibility with vaccine enthusiasts. I should have saved my breath.

Over the last two years, the government-endorsed segregation and dehumanisation of those who exercised their right to refuse the jab, has forced me to change my identity.

When Australia locked down in 2020, I soon tired of the daily command ‘Stay Home, Save Lives!’ mantra, turned the TV off, and started researching.

I discovered the government-imposed lockdown measures were replacing perfectly good pandemic plans that were updated August 2019. These were plans which, from what I could tell, hardly saw the light of day despite how much they cost to put together.

Australia, and much of the world, was ‘off script’.

No attention was being given to the well-documented costs of lockdowns and no effort was directed toward early treatment options. Nor were there attempts to improve the immune health of Australians through measures like nutrition, reducing alcohol consumption, and exercising. None.

With all this hand-washing, comfort eating, drinking, isolating, and fear mongering Australians were sitting ducks as far as their health was concerned. Meanwhile, the government and Chief Health Officers told us to sit tight and wait for the ‘saviour’ vaccine to arrive.

In August 2020, when Scott Morrison announced: ‘I would expect (the vaccine) to be as mandatory as you could possibly make it,’ I felt my eyebrows rise. Just how was our Prime Minister going to do that? The ethical, medical, and legal implications concerned me.

The Australian Health Practitioner Regulation Authority (AHPRA) position statement on Covid vaccination arrived in the mail in March 2021, and I felt my eyebrows rise again. AHPRA effectively told doctors to fall in line with government policy, warning that regulatory action may follow if a practitioner promoted anti-vaccination statements or undermined the immunisation campaign. More groundwork being laid.

Finally, in June 2021, Lt. General John Frewen was appointed as head of the National Covid Vaccine Taskforce. It became apparent we were part of a military-style operation, especially considering there were actual military forces policing our streets.

When the vaccine arrived in Australia, I decided to perform a personal risk-benefit analysis.

As a cancer survivor (I’m well now, thanks for asking), it had taken years to regain full health and I was keen to stay that way. The Covid risk calculator estimated my chance of survival at over 99 per cent. Not bad.

I then looked to the mRNA vaccines. Early data from overseas showed some concerning safety signals and surprising evidence of similar transmission rates by both vaccinated and unvaccinated. I could only surmise: we had new drug technology, with limited data, worrying safety signals, and indications it didn’t prevent infection or transmission.

For me, the risks did not outweigh the benefits, especially if it meant I could still infect my patients.

When the Tasmanian government mandated vaccines for all healthcare workers, I personally went, research in hand, and spoke to as many politicians as I could, recommending they adopt a risk management approach.

I spent hours writing, phoning, and visiting – arguing the point based on scientific evidence, ethics, and medical resource management.

I reasoned our state couldn’t afford to lose any healthcare professionals who would rather walk than take the vaccine.

I pleaded for the middle ground and a strategic approach including personal protective equipment (PPE), rapid antigen testing, and Telehealth – not just vaccination – to preserve both autonomy and the workforce so the healthcare system didn’t suffer further.

Many sympathised behind closed doors, but were unwilling to speak publicly (except Senator Eric Abetz, thanks Eric).

When the mandates came into effect, I chose to remain unvaccinated along with hundreds of others and was forced to stop work. I wasn’t even allowed to do Telehealth (can someone please explain that to me?). It felt punitive.

Now the truth is coming out.

The Centres for Disease Control and Prevention (CDC) has announced no difference between vaccinated and unvaccinated as the vaccines don’t prevent infection or transmission.

In addition, the Australian Therapeutic Goods Administration (TGA) has received more adverse reports in 2021 through June 2022 (18 months) for Covid vaccines than over the past 50 years for all other vaccines combined. This is not simply because of the number of Covid vaccinations.

Around the world there has been a significantly higher rate of reported adverse events and deaths for Covid vaccinations when compared with non-Coid vaccines like measles, polio, and flu vaccines.

And finally, the latest hospital admission statistics do not support the claim that the unvaccinated are more at risk of serious Covid disease, hospitalisation or death.

Just how bad is it? We don’t know. There is no long-term toxicity, carcinogenicity (cancer-causing), genotoxicity (effect on genes), or fertility studies.

As the fog of Covid-war lifts, I suspect we will realise more people have been harmed because of this single-minded ‘vaccine-or-bust’ approach than any other intervention foisted on the people before now. It truly is an iatrogenic crisis caused by bureaucrat-prescribed ‘medical’ treatment.

If an ‘anti-vaxxer’ is someone who cannot give informed consent to a ‘vaccine’ that fails to prevent infection or transmission, has alarming safety signals, must be taken to earn back the right to live and work in society, for a disease that has a greater-than 99 per cent survivability rate, then ‘yes’, I’m an anti-vaxxer…

My government made it so. 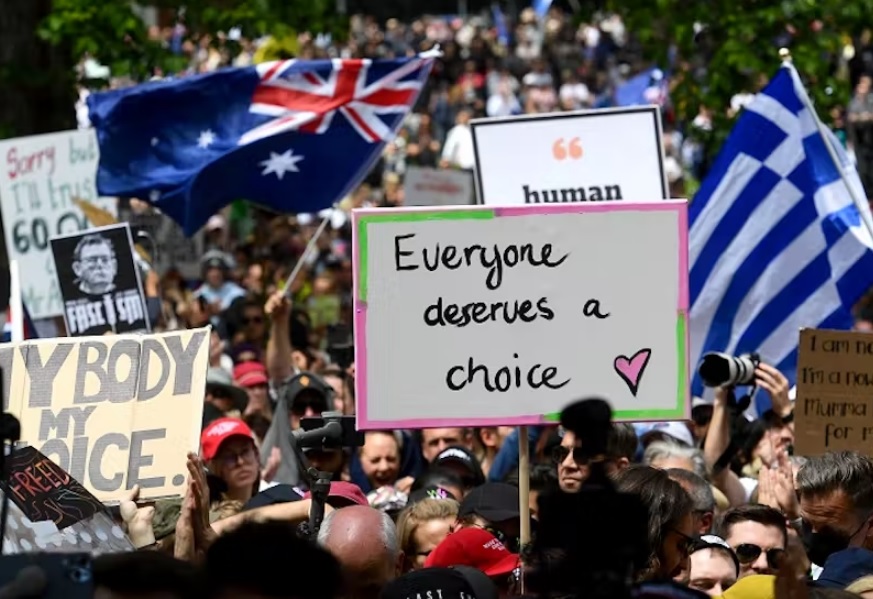 PrevPreviousMy 90-Second Comment to the WHO
NextHealth Experts are Quitting the NIH and CDC in Droves Because They’re Embarrassed by ‘Bad Science’ – Including Vaccinating Children Under 5 to ‘Make Their Advice Palatable to the White House,’ Doctors ClaimNext