If you’ve gotten a Covid-19 mRNA vaccine and like being human, an attorney named Todd Callender has some bad news for you. He indicated that you may no longer be human. Yes, you heard that correctly. That’s what Callender told social media influencer Maria Zeee claimed in an interview that’s been shared on an October 9 Instagram post and an October 6 Twitter post thousands of times. Instagram has labeled the post as “False Information: Reviewed by Independent Fact Checkers,” but Twitter hasn’t done so. Callender proclaimed that Covid-19 mRNA vaccines may have altered your genes to the point that you are no longer human. What have you become then? An enormous hedgehog? A cat who wears shoes? Are you dancer, as that song by the Killers goes? No, Callender asserted that you may now be a “homoborgenesis,” and thus not entitled to human rights.

A what? A member of the band Genesis? A whole more boring Jenny is? A home Bjorn Borg? No, “homoborgenesis” as this tweet indicated: 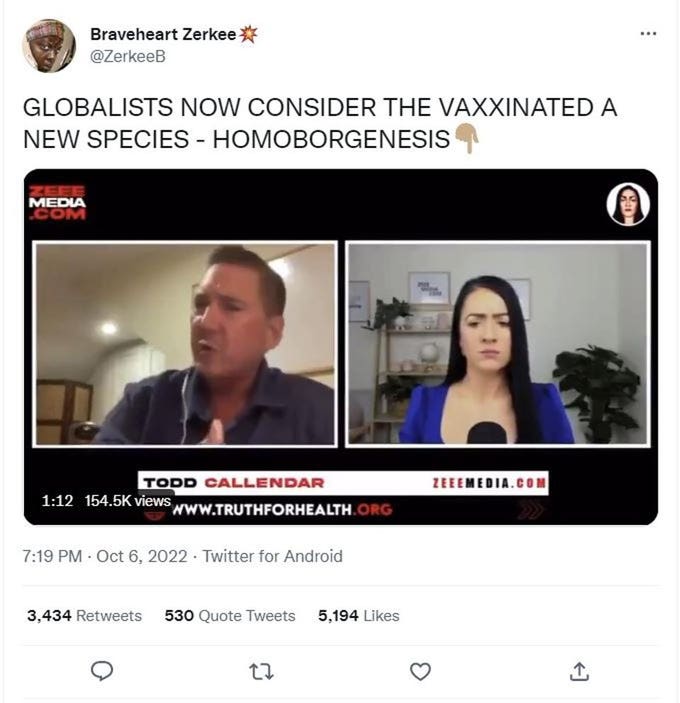 In the interview, Callendar told Zeee, “homoborgenesis is the species that they have named vaccinated people,” without specifying who exactly “they” are. He continued by saying, “Genetically modified people are now referred to as homoborgenesis, not homo sapiens. You can see it in the very first, I think it’s the second page actually, of the NASA’s Langley Research paper on fifth-generation warfare.” If you are thinking, darn missed that NASA’s Langley Research paper just like you did that last issue of of Cosmo or GQ, you wouldn’t be alone. It’s not clear whether there was even such a paper, because Callender didn’t provide any more details on how to find such a paper.

Callender went on to insist that you may now be “chattel property” of the patent holders for the mRNA vaccine. So if you were wondering if you have the freedom to smear your whole body with Nutella this weekend, you may want to double check with those who supposedly now own you.

A video of the entire interview is on the Red Voice Media website. A description of the video on the website indicated that “Attorney Todd Callendar joins us to discuss the need for targeted strategies to stop quarantine camps being utilised to imprison citizens, Biden’s Executive Order to advance transhumanism, end the patenting of human beings, and exiting the system of medical martial law being built globally.”

Holy smokes. Quarantine camps being utilised to imprison citizens? Biden’s Executive Order to advance transhumanism? Patenting of human beings? Medical martial law? Medical martial arts would be one thing, maybe consisting of spinning a stethoscope as nunchucks or calling yourself something like Bruce Lee while seeing patients in a clinic. But medical martial law would be something completely different, if it were indeed being put in place globally. Sounds like it would suck being a homoborgenesis too. After all, being human has its advantages such as the ability to go on dating sites like Tinder or get discounts at Costco.

There’s only one issue with all of these claims by Callender. It’s what’s called the WTF issue. Callendar just said stuff while providing essentially zero concrete evidence to support such statements. And all the time, Zeee wiz, the interviewer didn’t reposond with something like ummm what, do you have anything that proves what you are saying.

Oh, and vaguely mentioning some kind a research paper that people can’t easily find isn’t enough either. Try winning your next argument with your significant other by saying that the very first or second page of NASA’s Langley Research paper on fifth-generation warfare supports your side. Until you can provide the actual passage a paper you might as well cite what’s written on page negative 34 of the U.S.S. Enterprise starship manual.

It will be interesting to see what Twitter ends up doing with claims such as these now that the world’s richest human (as opposed to homoborgenesis) is now essentially running the company and has anointed himself “Chief Twit.” Musk recently tweeted out that Twitter will be forming a “content moderation council with widely diverse viewpoints” and that Twitter has “not yet made any changes to Twitter’s content moderation policies”:

To be super clear, we have not yet made any changes to Twitter’s content moderation policies https://t.co/k4guTsXOIu

Will “widely diverse viewpoints” include people claiming that those vaccinated against Covid-19 are no longer human? Or will there be a clear, transparent mechanism in place to moderate such content that goes against scientific evidence?

This is just a taste of the lengths that some people are going to try to discredit the Covid-19 vaccines and potentially scare people from getting vaccinated. As I have covered before for Forbes, there is no evidence that the Covid-19 mRNA vaccines can alter your genes and that you’ll no longer be human after getting vaccinated. It would be rather inhuman, though, to knowingly spread misinformation and disinformation about vaccines, especially if it is for political or financial gain. 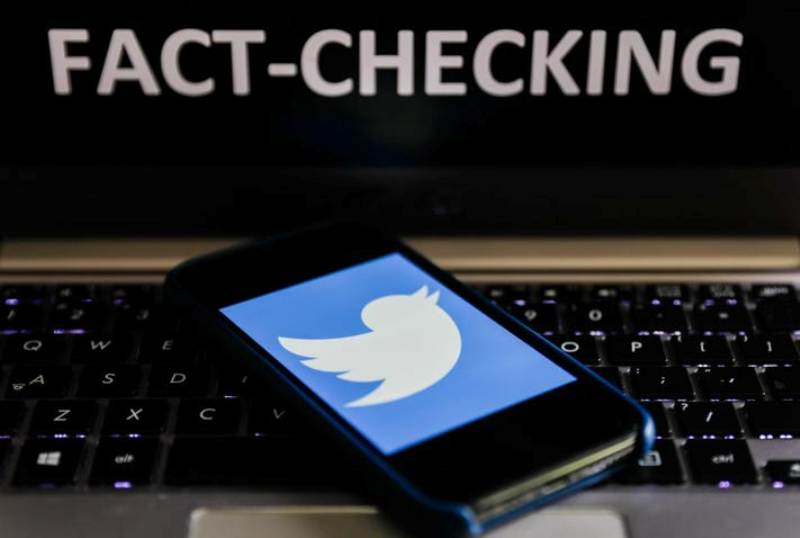