Barely more than a week ago, on July 31, The Epoch Times published an article of mine—”Would the Indictment of Donald Trump Lead to Civil War?”

How fast things move; not even Usain Bolt could keep up.

What’s behind the FBI’s raid of Trump’s Mar-a-Lago home besides a burst of Neo-Stalinism reminiscent of Comrade Beria’s “show me the man and I’ll show you the crime” mixed with an effort to prove once-and-for-all that the United States is becoming a banana republic run by characters out of “Seven Days in May.”

What made 30 (or was it more) FBI agents give a former president the Gestapo treatment in the early hours of the morning, allegedly rummaging in multiple rooms of his house, not looking so much for anything in particular—anything would do—while breaking into his safe in the process?

Call it The Big Panic. Call it something more insidious—the instigation of one-party rule.

The Democrats, the Deep State, the Justice Department (DOJ), the FBI, and all the intelligence agencies, globalists, propagandists of mainstream media, and all adherents of that one-party rule and enemies of republican government, will do anything—anything—to stop Trump from winning the 2024 election.

That includes courting civil war and endangering millions of lives in the process, even though some of these panic-stricken individuals must realize they could ultimately lose that war.

It doesn’t matter to them. They need to stop Trump. They know the current list of candidates on their side has no chance of winning in a country with an economy and global importance that are tanking simultaneously.

Worst of all—they would lose their jobs, many of which are lifetime sinecures.

Trump’s main goal now is to end the Deep State, including such things as simply closing down the Department of Education, which has done nothing positive for education since its inception. He has said as much in recent speeches, often to wild applause.

Everybody goes home. No wonder they hate him.

If Trump were to come into office in 2025, you can imagine the investigations. Just who really was behind the Russia hoax? Was it just Hillary Clinton? Was Barack Obama involved in some way? Joe Biden? What exactly was behind the effort to impeach Trump over his phone call to Ukrainian President Volodymyr Zelenskyy, when those testifying against Trump turned out to be deeply involved in all sorts of corruption in that very country?

And then, of course, there’s Hunter Biden and the fact that he hasn’t yet been indicted, years after the production of the laptop and so many of its lurid details revealed that undoubtedly would be or already are of use to our enemies. This would naturally include possible details of unconscionable greed on the part of the current president.

My guess is that a settlement of that case (with all evidence sealed to protect the “Big Guy,” of course) could happen soon, if only to undercut the storm that’s sure to come—or is already here—over the treatment of Donald Trump.

Add this all together, or even part of it, and it’s easy to see why the DOJ did the judge shopping—what else could it be—necessary to find the sufficiently biased “adjudicator”—how hard is that—who would agree there was probable cause to invade Mar-a-Lago.

Next up—the perp walk of Donald Trump in handcuffs.

Political theater at its most extreme, it would be the apotheosis of the United States as a one-party state, because what’s the Deep State if not that?

If they then try Trump in a Washington court similar to the one that exonerated Michael Sussmann for his role in initiating the Russia hoax, the chances of civil war will be approaching 11 out of 10.

As Clay Travis mentioned on Sean Hannity’s show on Aug. 8, we no longer can trust evidence brought forth by the FBI. After the Russia hoax and those still-unexplained participants in the Jan. 6, 2021, demonstrations who seem to have been inciting insurrection but for some reason haven’t been indicted, how can we possibly?

The FBI and the DOJ are no longer believed by half the country. Who are FBI Director Chris Wray and Attorney General Merrick Garland that they could be so disconnected from their fellow citizens, so emotionally contorted, that they could do such a thing—that they could put us all in such a position of near-maximum distrust? What possible justification do they really have, other than the preservation of power in its most naked forms?

This is an untenable situation for a democratic republic, not that we are one anymore. To put it bluntly, we are already China—or something very close. Pay attention. Act accordingly.

How bad is it? If you haven’t, read this from the New York Post:

“The Florida federal magistrate judge who signed off on a search warrant authorizing the FBI raid of former President Donald Trump’s Mar-a-Lago resort left the local U.S. Attorney’s office more than a decade ago to rep employees of convicted pedophile Jeffrey Epstein who had received immunity in the long-running sex-trafficking investigation of the financier.

“Sources tell The Post that Judge Bruce Reinhart approved the warrant that enabled federal agents to converge on the palatial South Florida estate on [Aug. 8] in what Trump called an ‘unannounced raid on my home.’

“Reinhart was elevated to magistrate judge in March 2018 after 10 years in private practice. That November, the Miami Herald reported that he had represented several of Epstein’s employees—including, by Reinhart’s own admission to the outlet, Epstein’s pilots; his scheduler, Sarah Kellen; and Nadia Marcinkova, who Epstein once reportedly described as his ‘Yugoslavian sex slave.’” 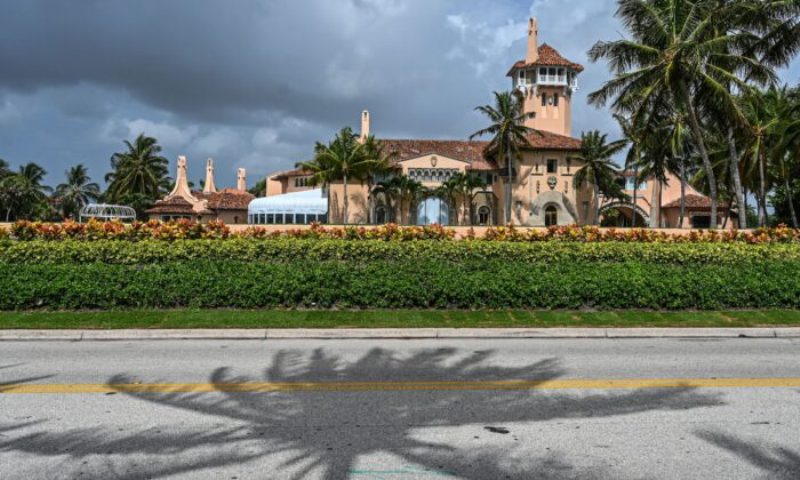