Google employees protesting the company’s Project Nimbus contract with Amazon Web Services and the Israel Defense Forces (IDF) have gone public with a week of protest actions set to culminate in a multi-city demonstration headlined No Tech for Apartheid.

A multiethnic, multireligious group of Googlers calling themselves Jewish Diaspora in Tech hopes to pressure the corporate giant into dropping the mammoth $1.2 billion contract on moral grounds, arguing that by allowing Israel access to its most sophisticated machine learning and AI technology, Google is enabling crimes against the occupied Palestinian population.

Google marketing manager and leading anti-Nimbus advocate Ariel Koren announced her resignation on Tuesday after what she described as a pattern of hostility and retaliation from management. After seven years with the company, Koren said she was presented with an ultimatum – move from San Francisco to Google’s Brazil office or quit – over her efforts lobbying against the project.

“Google is aggressively pursuing military contracts and stripping away the voices of its employees through a pattern of silencing and retaliation towards me and many others,” Koren wrote in her resignation letter published on Medium. The secretive effort to provide an “all-encompassing cloud solution” powered by the company’s most advanced technology has seen Google abandon its prized transparency so much that employees have no idea what the tech they’re selling the IDF will really be used for, she claimed.

Koren and her colleagues are seeking basic transparency regarding what their labor will be used to do, she told Peacock TV, explaining that under the current regime, “we don’t understand the extent to which [our work] is going to be used to perpetrate systemic human rights violations by an agency and by a military that we know violates human rights in an extremely egregious and atrocious way every single day.” Worse, the Nimbus contract explicitly bars Google or Amazon from exerting control over how their services are used by the IDF.

Since the launch of Project Nimbus, Google has become an aggressively anti-Palestinian place to work, according to 15 employees whose recorded testimonials were released to coincide with Koren’s resignation. Google employees can no longer even “express any opinion of disagreement of the war waged on Palestinians without being called into an HR meeting with the threat of retaliation,” one Palestinian Googler said, while another was told using the phrase “support Palestine” was offensive.

“I feel like I’m making a living off the oppression of my family back home,” a third anonymous employee lamented.

They also charge that Project Nimbus violates Google’s vaunted AI code of ethics, which prohibits the company from using AI to cause harm, develop weapons, or conduct surveillance in violation of international norms. The code was devised after employee activism scuttled Project Maven, a Pentagon initiative that would have used Google’s AI to analyze drone surveillance footage for the purpose of improving targeting.

While Google declined to comment regarding specifics of Project Nimbus, a spokeswoman dismissed Koren’s claims regarding retaliation by management, explaining they had been “thoroughly investigated” and found baseless. 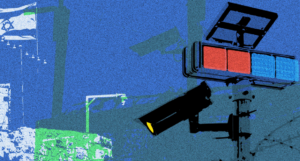