The largest cryptocurrency in market value toggled above and below the psychologically important threshold.

Bitcoin (BTC) and Ether (ETH) both declined on Thursday, settling into what seems likely to be a flat trading range for the foreseeable future.

For digital assets, the better-than-expected jobs data is not likely to serve as a bullish catalyst. Given the Federal Open Market Committee’s (FOMC) resolve to slow inflation, stronger employment data is likely to lead to increased consumer demand. The result of this increase (i.e., more dollars chasing a basket of goods) is likely to push prices higher.

According to the CME FedWatch tool, the odds of a 75 basis point increase in the Fed funds rate during the FOMC’s next meeting on Sept. 21 have increased to 72%, from 69% a day earlier.

Commodities: Crude oil prices fell for the third consecutive day, declining 3.7% to $86 per barrel. Natural gas finished 0.61% higher, while the price of safe-haven asset gold as well as copper fell 1% and 3%, respectively.

Bitcoin was recently trading below $20,000 on Thursday, continuing a flat trading range that began on Aug. 27. While the price of BTC has traded above and below $20,000 in each of the last six days, in the aggregate the price has moved just 2%.

The average true range (ATR) for BTC has fallen from 2,065 in June, to a current level of 903. ATR is a technical indicator that measures the absolute value of price movement over a period of time. Increasing ATR levels signal increased volatility while a declining ATR (which we currently have) indicates the opposite.

The compression in volatility for BTC, combined with moderate to below-average volume and proximity to its $21,000 point of control (discussed in Wednesday’s Market Wrap), or price level with substantial activity, signals a continuation of sideways trading behavior in the near future.

Given the oft-mentioned macroeconomic overhang, BTC doesn’t seem to have a bullish catalyst at the moment.

“With more visible development happening in the crypto ecosystem, many institutional investors are starting to view the current crypto ‘winter’ as similar to the period after the ‘dot.com’ bust which ultimately ended up being a generational buying opportunity for technology stocks,” McMillan said.

McMillan added that investors are seeing more interest in cryptos than other assets partly because of their longer-term prospects.

“Investors are still certainly focused on the near-terms risks, but we’re definitely seeing a greater appreciation for the growth potential going forward which definitely isn’t shared with other asset classes,” he said.

A look at BTC’s “Commitment of Traders” data shows that larger speculators (i.e., institutional money) are indeed beginning to enter into long positions. The report, published by the Commodity Futures Trading Commission (CFTC) each Tuesday provides a weekly snapshot of positions held by traders in futures markets. 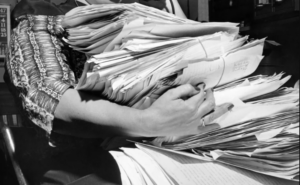