Top-ranking Biden administration officials — including Dr. Anthony Fauci — and five social media giants have 30 days to respond to subpoenas and discovery requests in a lawsuit alleging the government colluded with social media companies to suppress freedom of speech “under the guise of combatting misinformation.”

Top-ranking Biden administration officials — including Dr. Anthony Fauci — and five social media giants have 30 days to respond to subpoenas and discovery requests in a lawsuit alleging the government colluded with social media companies to suppress freedom of speech “under the guise of combatting misinformation.”

“In May, Missouri and Louisiana filed a landmark lawsuit against top-ranking Biden Administration officials for allegedly colluding with social media giants to suppress free speech on topics like COVID-19 and election security,” Schmitt said in Tuesday’s press release.

“Earlier this month, a federal court granted our motion for expedited discovery, allowing us to collect important documents from Biden Administration officials. Yesterday, we served discovery requests and today served third-party subpoenas to do exactly that.

“We will fight to get to the bottom of this alleged collusion and expose the suppression of freedom of speech by social media giants at the behest of top-ranking government officials.”

Schmitt announced in a July 12 statement that Terry Doughty, a judge in the U.S. District Court for the Western District of Louisiana, ruled in favor of a June 17 motion for expedited preliminary injunction-related discovery and set a timetable with specific deadlines for depositions.

According to Schmitt, government officials “both pressured and colluded with social media giants Meta, Twitter and Youtube to censor free speech in the name of combating so-called ‘disinformation’ and ‘misinformation,’ which led to the suppression and censorship of truthful information on several topics, including COVID-19.”

“The Court’s decision cleared the way for Missouri and Louisiana to gather discovery and documents from Biden Administration officials and social media companies,” Schmitt said in a press release on Tuesday.

In a statement on Twitter announcing the court’s decision to grant the attorneys general’s request, Schmitt said, “No one has had the chance to look under the hood before — now we do.”

🚨 BREAKING: A federal court granted our request for discovery & documents from top ranking Biden officials & social media companies to get to the bottom of their collusion to suppress & censor free speech.

No one has had the chance to look under the hood before – now we do. pic.twitter.com/TzrxtC3piN

“CHD welcomes this groundbreaking ruling from Judge Doughty of the Western District of Louisiana to discover whether the Biden administration has violated the First Amendment through censorship.

“For two years, CHD and many other media outlets have not been able to comprehend the mechanisms whereby our major media platforms have ruthlessly censored, suppressed and distorted our information.

“Now, through the discovery process that the judge has allowed, we’ll find out how Meta, Instagram, Twitter and YouTube have been colluding with the federal government to curb so-called ‘disinformation’ and ‘misinformation.’ This is a new day.”

According to the press release, Fauci, chief medical advisor to President Biden and director of the NIAID, was asked to turn over any communications with social media platforms related to content modulation and/or misinformation, and to disclose all meetings with any social media platform related to the subject and to provide all communications with Mark Zuckerberg from Jan. 1, 2020, to the present.

White House Press Secretary Karine Jean-Pierre is required to identify every officer, official, employee, staff member, personnel, contractor or any other person associated with the White House communications team who communicated or is communicating with any social media platform related to content modulation and/or misinformation — and to turn over those communications.

Defendant Nina Jankowicz, who was tasked with heading up the Biden administration’s “Disinformation Governance Board” must provide all documents related to communications with social media platforms and content modulation and/or misinformation.

Jankowicz is required to identify the nature, purpose, participants, topics to be discussed and topics actually discussed at the meeting between DHS personnel and Twitter executives Nick Pickles and Yoel Roth scheduled on or around April 28.

The CDC is required to provide the names of every officer, official, employee, staff member, personnel, contractor or agent of CDC or any other federal official or agency who communicated or is communicating with any social media platform regarding content modulation and/or misinformation.

The agency must also disclose all “government experts” who are federal officers, officials, agents, employees or contractors, who have “partnered with” Facebook or any other social media platform to address misinformation and/or content modulation, including all communications relating to such partnerships.

Like Fauci, the CDC must turn over information and communications on the “so-called disinformation dozen,” Great Barrington Declaration, alternative news outlets and key experts and scientists who have spoken out against the government’s approach to treating COVID-19 or mandating face masks and lockdowns.

Facebook also must disclose meetings, communications and documents related to remarks made by Psaki, who said the White House is “in regular touch with these social media platforms, and those engagements typically happen through members of our senior staff, but also members of our COVID-19 team,” and regarding the White House’s efforts to flag “problematic posts for Facebook that spread disinformation.”

Attorneys general of Louisiana and Missouri in May filed a lawsuit alleging government defendants “colluded with and/or coerced social media companies to suppress disfavored speakers, viewpoints, and content on social media platforms by labeling the content ‘disinformation,’ ‘misinformation’ and ‘malinformation.’”

The complaint also alleges that DHS’ Disinformation Governance Board was created “to induce, label, and pressure the censorship of disfavored content, viewpoints and speakers on social-media platforms,” and that HHS and DHS violated the Administrative Procedure Act to “hold unlawful and set aside final agency actions” that are deemed to be an abuse of power and arbitrary and capricious.

The lawsuit provides several examples of truthful information that was censored by social media companies who later admitted the content was truthful or credible.

According to The Epoch Times, the lawsuit could help bring to light the Biden administration’s “behind-the-scenes efforts” to discourage the dissemination of information related to the lab-leak theory of COVID-19’s origins and the efficiency of masks and lockdowns. 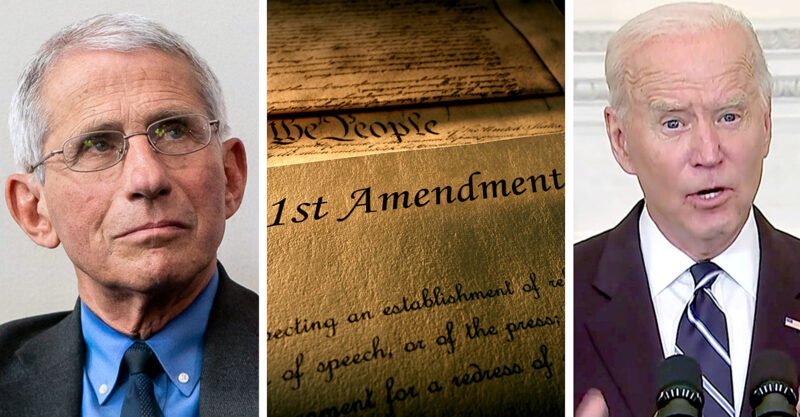 PrevPreviousRand Paul Puts Anthony Fauci on Notice, He Could Be In Serious Trouble
NextTucker Carlson Responds to Rumors He May Run for President in 2024Next