Just in: Greenland ice sheet gained 7 Gigatons of mass in just one day yesterday — the largest daily gain ever recorded during the summer. 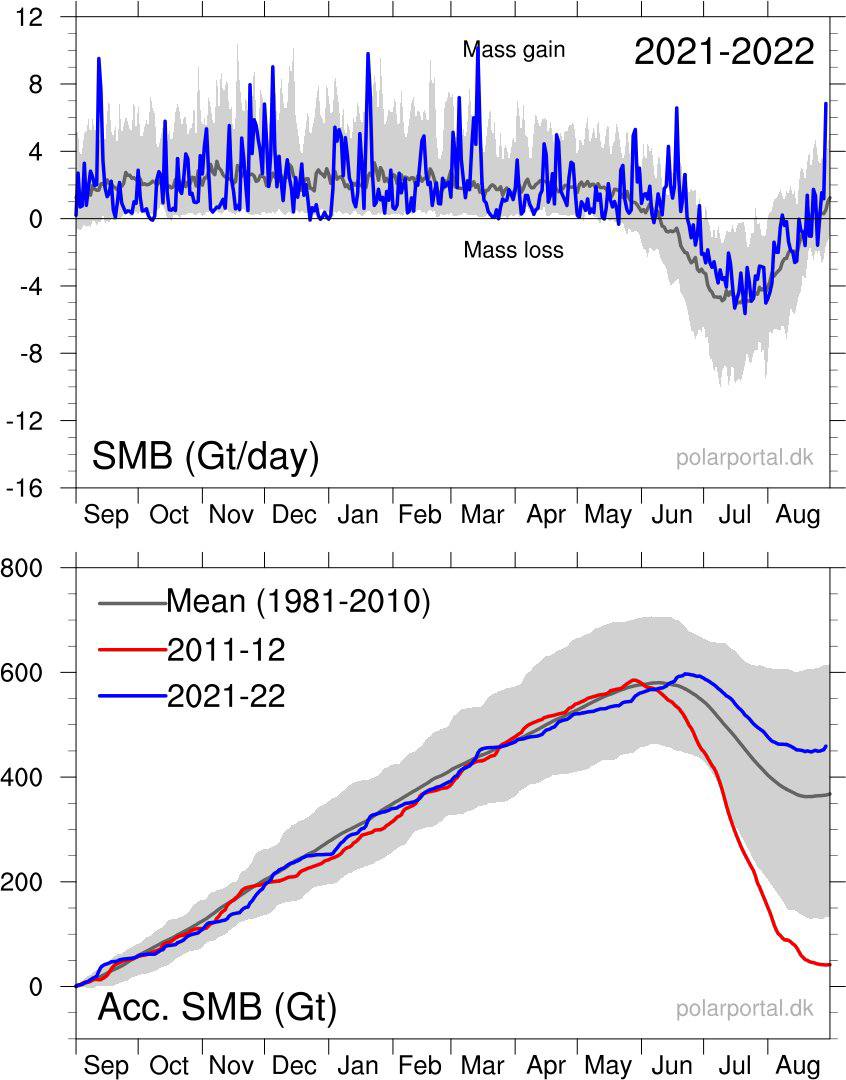 The map illustrates how the surface of the Greenland Ice Sheet gains and loses mass on a daily basis. This is known as the surface mass balance. It does not include the mass that is lost when glaciers calve off icebergs and melt as they come into contact with warm seawater.

By holding the mouse over the black circles, you can see the day’s weather observations from meteorological stations that are used to monitor the melting processes.

We have technical problem with showing the PROMICE observations.

By clicking on the magenta circle, measurements of runoff from Watson river close to Kangerlussuaq is shown. The river drains about 12000 km2 of the inland ice.

The graph below the map shows the total daily contribution from all points on the ice sheet.

The light grey band shows differences from year to year. For any calendar day, the band shows the range over the 30 years (in the period 1981-2010), however with the lowest and highest values for each day omitted.

The Greenland Ice Sheet evolves throughout the year as weather conditions change. Precipitation increases the mass of the ice sheet, whilst greater warmth leads to melting, which causes it to lose mass. The term surface mass balance is used to describe the isolated gain and loss of mass of the surface of the ice sheet – excluding the mass that is lost when glaciers calve off icebergs and melt as they come into contact with warm seawater.

The figures above are updated on a daily basis and show how much mass in terms of snow, ice or water is lost or gained on the surface of the Ice Sheet.

The black circles on the map correspond to the PROMICE meteorological stations that have been established to monitor the melting processes. Note that the circles on the map are slightly displaced from their actual positions in order for them to be distinguishable. On the large version of the map they are marked with small dots at their true positions. By clicking on the magenta circle, measurements of runoff from Watson river close to Kangerlussuaq is shown. The river drains about 12000 km2 of the inland ice.

The density of snow and ice is different to that of water, and the figures are therefore converted to water to ensure that the total mass is calculated.

The model on which “Daily change” and “Accumulated” are based

The figures are based in part on observations made by meteorological stations on the ice sheet and in part on DMI’s research weather model for Greenland, Hirlam-Newsnow, and since 1 July 2017 the HARMONIE-AROME weather model. This data is used in a model that can calculate the total amounts of ice and snow. Snowfall, melting of snow and bare ice, refreezing of melt water and snow that evaporates without melting first (sublimation) are all taken into account in this model.

The model was enhanced in 2014 to take into account the fact that some of the melt water refreezes in the snow, and again in 2015 in order to also take into account the low reflection of sunlight on bare ice compared to snow. Finally, it has been updated again in 2017 with a more advanced representation of percolation and refreezing of meltwater. At the same time, we have extended the reference period to 1981-2010. The update means that the new maps, figures and graphs will deviate from previous examples that can be seen in earlier season reports. Everything that appears on this page, however, is calculated using the same model, such that all graphs and values are directly comparable.