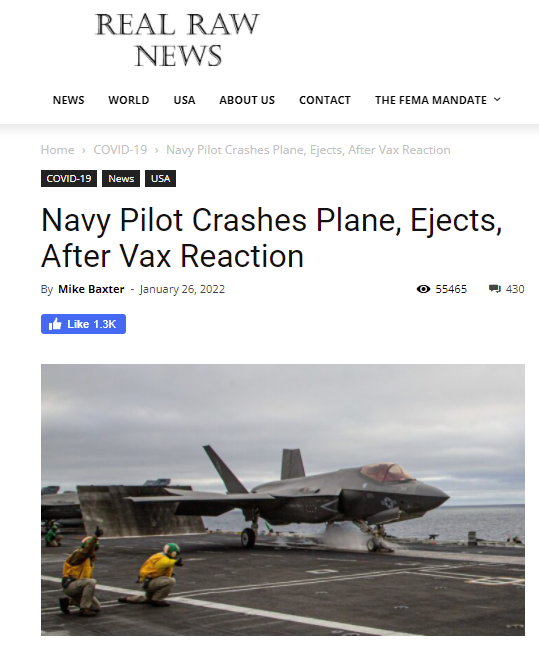 When a top Navy pilot crashes a $100M stealth fighter jet (allegedly 72 hours after his booster), everyone is put under a gag order. That is standard. But crashes like that are not.

What I know for sure is that my military sources tell me that the US military will take all necessary steps to ensure that nobody finds out that the COVID vaccines are killing people, jeopardizing the safety of our armed forces, jeopardizing our readiness, and causing untold amounts of damage. Just like there was a cover-up when the DoD DMED data leaked out, I expect a cover-up here.

So we may never find out what really happened here. This isn’t an honest level playing field.

My sources for the information in this article are members of the military and news sources available on the Internet.

I believe the story at Real Raw News is almost certainly false, but the crash is real.

Real Raw News reported the F-35 crash story claiming that an experienced pilot flying a $100M F-35 fighter jet had been boosted 72 hours earlier and experienced a myocarditis incident during landing which caused him to crash land the plane on the deck of the USS Carl Vinson. The plane quickly slid off the deck and into the sea. The article claimed he muttered “fucking vaccine” right before the crash.

Sounds plausible, but did this really happen?

The jet crashed for sure and slid off the deck. That has been verified via leaked footage verified by the Navy.

As for the other details, that remains to be determined.

The problem is that Mike Baxter, who claims to be a former mainstream journalist, writes every story on the site. I was hard pressed to find a single true story on their website. This makes Real Raw News a very unreliable source in my mind. In short, I wouldn’t believe anything I read on that site.

So lacking further details, the safest assumption is that the story behind the crash is a complete fabrication.

Someone else will have to break the story for anyone to have confidence in what really happened.

What I learned from my friends in the military

But this story did cause me to reach out to my friends in the military to see if they knew what really happened. What I found when I did that was even more shocking.

The military is being ordered from the top down to take the COVID vaccine and not ask any questions. When there are incidents involving the vaccine, a cover story is fabricated so as not to implicate the COVID vaccine since doing so could create vaccine hesitancy. The COVID vaccines are so controlled in the military that not even the pharmacists or doctors on a military base are permitted to handle them or ask questions. This is unprecedented. When doctors try to ask questions about safety, they are told just to follow orders. Again this is unprecedented.

So when an F-35 pilot supposedly gets a COVID booster just 72 hours before he has an acute case of myocarditis causing him to crash land and destroy a $100M aircraft, nobody wants to talk about it. It will be under investigation with everyone under a gag order for around 30 days. When that ends, we may find out more. Or maybe not. Until then, it’s all speculation.

My sources basically say the vaccines are dangerous, they can see the health impacts on the soldiers, that the vaccines don’t work, and that it is insane to discharge soldiers that the military has invested (in some cases) decades of training just because they won’t take a vaccine that Biden wants them to take. The number of deaths from COVID are trivially small in the military and hardly justifies the purge. It is nonsensical.

In short, the military brass is forcing these vaccines down people’s throats and will not tolerate any discussion. As we saw from the DMED database fiasco, if incriminating evidence is leaked, the military will rapidly cover it up (though the cover-up was sloppy and they are digging themselves even deeper into a hole).

Did the pilot just get boosted 72 hours before the crash? Was he diagnosed with myocarditis? Did he really say “fucking vaccine” before he crashed?

I don’t know but I’m always impressed with what my readers know, so maybe we have a reader or two on board the USS Carl Vinson who can enlighten us in the comments. 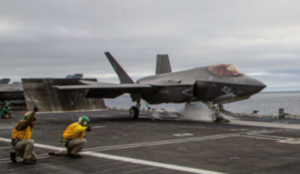