In March 2020, people in UK had to stay home to flatten the curve. Why did these people stay at home? Were they afraid of the Wuhan virus? The virus that “killed” about 128,000 people. Really?

We are living in a big lie. It’s been 15 months now, and they haven’t stopped lying. Their dark lies are killing people.

The WHO said, “Most people infected with the COVID-19 virus will experience mild to moderate respiratory illness and recover without requiring special treatment”, adding that “older people and those with underlying medical problems like cardiovascular disease, diabetes, chronic respiratory disease, and cancer are more likely to develop serious illness.”

British Lung Foundation shared:
Pneumonia is an inflammation of one or both lungs, usually caused by an infection. It causes the alveoli (air sacs) inside the lungs to fill with fluid, making it harder for them to work properly. The body sends white blood cells to fight the infection, and while this helps kill the germs, it can also make it harder for the lungs to pass oxygen into the bloodstream.
Pneumonia is not a new condition that has appeared due to Covid-19. In 2019 alone, the year prior to the alleged emergence of Covid-19, 272,000 people were admitted to the hospital with pneumonia. According to the British Lung Foundation, in 2012, 345 people per every 100,000 had one or more episodes of pneumonia. This equates to around 225,000 people suffering from pneumonia at least once. 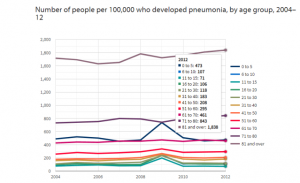 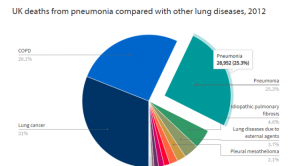 Check out the death cases in other age groups.

A&E attendance in the first wave was 57% down on the previous year.

People died at hospitals and care homes. If they had serious complications, would they ask for urgent medical care?

These people were in care homes. Not in hospitals. On March 19, there was a special order to the NHS. This order was related to patients and hospital beds.

Hospitals were empty because someone wanted to be empty. In April, hospitals were 30% emptier than last year.

Enter Midazolam. The medication is used in palliative care. It’s also used in executions by lethal injection in the US. It makes the prisoner unconscious and two other medicines stop their lungs and heart. 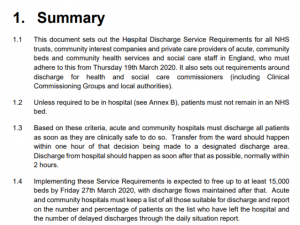 It’s used before surgeries and is administered with the anesthesia.

“Midazolam induces significant depression of respiration
UK regulators insist Midazolam should only be administered in a hospital or doctor’s office under the supervision of a doctor or nurse to monitor the breathing of the patient in order to provide life-saving treatment to the patient if breathing slows or stops.
Midazolam should be used with extreme caution in elderly patients
The drug induces depression of respiration.”

NHS polity before the COVID-19 emergency stated:
Dosage should be reduced to 0.5mg in the elderly or unwell due to possible side effects, which include cardiorespiratory depression, and extreme caution should be used in administering Midazolam to patients suffering respiratory disease.

Hospitals beds in April 2020 30% were down compared to the previous year.

The vast majority of alleged Covid deaths are people over the age of 85.

Midazolam injection may cause serious or life-threatening breathing problems such as shallow, slowed, or temporarily stopped breathing, leading to permanent brain injury or death. You should only receive this medication in a hospital or doctor’s office that has the equipment needed to monitor your heart and lungs and provide life-saving medical treatment quickly if your breathing slows or stops. Your doctor or nurse will watch you closely after receiving this medication to ensure that you are breathing correctly.

More from the Amnesty report and CQC report:

‘Care home managers and staff and relatives of care home residents in different parts of the country told Amnesty International how, in their experience, sending residents to hospital was discouraged or outright refused by hospitals, ambulance teams, and GPs. A manager in Yorkshire said: “We were heavily discouraged from sending residents to hospital. We talked about it in meetings; we were all aware of this.”’

‘Another manager in Hampshire recalled:
There wasn’t much option to send people to hospital. We managed to send one patient to hospital because the nurse was very firm and insisted that the lady was too uncomfortable and we could not do any more to make her more comfortable but the hospital could. In hospital the lady tested COVID positive and was treated and survived and came back. She is 92 and in great shape.
She explained that:
There was a presumption that people in care homes would all die if they got COVID, which is wrong. It shows how little the government knows about the reality of care homes.‘

The son of one care home resident who passed away in Cumbria said that sending his father to hospital had not even been considered:
From day one, the care home was categoric it was probably COVID and he would die of it and he would not be taken to hospital. He only had a cough at that stage. He was only 76 and was in great shape physically. He loved to go out and it would not have been a problem for him to go to hospital. The care home called me and said he had symptoms, a bit of a cough and that doctor had assessed him over mobile phone and he would not be taken to hospital. Then I spoke to the GP later that day and said h would not be taken to hospital but would be given morphine if in pain. Later he collapsed on the floor in
the bathroom and the care home called the paramedic who established that he had no injury and put him back to bed and told the carers not to call them back for any Covid-related symptoms because they would not return. He died a week later.
He was never tested. No doctor ever came to the care home. The GP assessed him over the phone. In an identical situation for someone living at home instead of in a care home, the advice was “go to hospital”. The death certificate says pneumonia and COVID, but pneumonia was never mentioned to us.’

‘A care home manager in Yorkshire told Amnesty International:
In March, I tried to get [a resident] into hospital—the ambulance had employed a doctor to do triage but they said, “Well he’s end of life anyway so we’re not going to send an ambulance” … Under normal circumstances he would have gone to hospital … I think he was entitled to be admitted to hospital. These are individuals who have contributed to society all their lives and were denied the respect and dignity that you would give to a 42-year-old; they were [considered] expendable.‘

‘It is vitally important that older and disabled people living in care homes and in the community can access hospital care and treatment for COVID-19 and other conditions when they need it during the pandemic … Providers should always work to prevent avoidable harm or death for all those they care for. Protocols, guidelines and triage systems should be based on equality of access to care and treatment. If they are based on assumptions that some groups are less entitled to care and treatment than others, this would be discriminatory. It would also potentially breach human rights, including the
right to life, even if there were concerns that hospital or critical care capacity may be reached.’

Before It’s News reported: The reason it was decided it should be abolished is that the review found hospital staff wrongly interpreted its guidance for care of the dying, leading to stories of patients who were drugged and deprived of fluids in their last weeks of life.