The value of RMB payments gained over 10% compared to December amid an inauspicious test of the digital yuan at the Winter Olympics. Bitcoin and major altcoins tumbled as tensions continued mounting on the Ukraine border.

Insights: The renminbi is on the rise; the eCNY face-plants at the Winter Olympics. Cryptos tumble over the weekend.

Bitcoin tumbled below $40,000 in the early weekend hours and kept dipping amid rising tensions on the Ukraine-Russia border and continued inflationary fears. Ether and almost all other major cryptos also dropped.

A possible exploit of OpenSea, the leading NFT platform, may have further frightened investors away from crypto.

All these factors may have “led investors to risk-off from crypto,” said Joe DiPasquale, the CEO of fund manager BitBull Capital.

At the time of publication, bitcoin was trading at around $38,700, a 3.3% drop over the past 24 hours and its lowest level since Feb. 3. Ether, the second largest cryptocurrency by market capitalization, was changing hands at slightly over $2,600, off nearly 4% and its lowest point since the first week of the month.

The declines came as U.S. intelligence reported that Russia had already decided to invade Ukraine. On Sunday, U.S. Secretary of State Antony Blinken told CNN’s State of the Union talk show that “everything leading up to the actual invasion appears to be taking place. All of these false-flag operations, all these provocations to create justifications — all that is already in train.” Meanwhile, investors were gearing for the first of what is expected to be several Federal Reserve interest rate hikes.

Separately, in a late Saturday tweet, OpenSea CEO Devin Finzer wrote that “32 users thus far have signed a malicious payload from an attacker, and some of their NFTs were stolen.” Finzer suggested that a fraudulent website may be to blame. OpenSea said in a separate tweet that it was investigating the incident.

DiPasquale sees the next Bitcoin support line at about $35,000.

He noted that Solana was the only altcoin among the top 20 by market cap on the CoinDesk price page to rise over the weekend, reflecting “some strength from investors due to being a Proof of Stake protocol.” But DiPasquale called that increase “simply price recovery” because Solana had fallen more sharply than Bitcoin and other altcoins. “While Bitcoin is largely flat for February, Solana is still down, so its recovery simply returns it closer to parity of gains and losses for other crypto assets.”

As last week came to a close in Asia, Chinese state media reported that China’s currency, the renminbi, was on the rise. Citing data from SWIFT, traditional finance’s closed ledger for interbank fund transfer, China media said the value of RMB payments increased by 10.85% compared with December. Now, the RMB accounts for 3.2% of all transactions worldwide, up from 2% in November. Meanwhile, Britain’s pound accounts for 6.3% of global transactions.

In many ways, this is the capstone of two other RMB-related stories from the week: a reiteration of an announcement that gas producer Gazprom Neft will accept the RMB instead of dollars for fueling Russian airplanes at China’s airports, and China’s central bank digital currency (CBDC), the eCNY, made its Winter Olympics debut inside the games’ closed loop.

But neither of these stories are as earth-shattering as Beijing might have hoped.

Inbound flights into China sank to around 500 per week from 10,000 pre-coronavirus pandemic; only a fraction of these are from Russia. Oil is still priced globally in U.S. dollars (USD).

As for the eCNY, the Olympics were supposed to be its coming-out party, where foreign tourists would exchange their greenbacks or euros for some sweet reminbi issued on a digital ledger. But the borders are still closed. No foreign tourists are invited. Locals that were able to attend the games used eCNY at venues — cash was barred — while the few foreigners in attendance used Visa, the official credit card partner of the games.

Foreigners at the games, as The Wall Street Journal reported, preferred to use Visa. “What’s the difference from using my Visa card then?” one asked when they were told they could load their foreign currency onto a plastic eCNY card or hardware wallet. And for the more remote venues that didn’t have a eCNY reader before they were sealed off from the outside world as part of the Olympic bubble, it was back to AliPay or WeChat Pay, the favorite payment mechanism for many in China.

All of this is a micro example of a macro problem for China. When it comes to digital currency, the USD is still king. In 2020, Chainalysis reported that $50 billion in capital flowed out from China in crypto and mostly in dollar-pegged tether.

As Bloomberg commodity strategist Mike McGlone has pointed out, the best thing for the dollar is crypto.

“Despite the shrinking U.S. portion of the world’s GDP, the dollar increasingly dominates, notably in the digital ecosystem,” McGlone wrote in April 2021. “There appears to be little to stop the most consistent trends in crypto assets: rising trading volume and the proliferation of stablecoins tracking the dollar.”

And these stablecoins currently have a market cap of $183 billion, according to CoinGecko, with tether dominating by a large margin. You have to scroll down to the eighteenth position to find a non-USD or gold stablecoin, and that’s tether paired with the euro with a measly market cap of $234 million.

Despite Beijing’s digital dreams, the eCNY will be a tough sell on the market because of capital controls on the yuan. This is why China is only marketing it domestically now.

The few yuan that are allowed to leave the country have a specific pathway to the outside world via Hong Kong’s vast “offshore” RMB liquidity pools where they end up being converted to the freely convertible Hong Kong dollar, the original “stablecoin” with its USD peg.

Tim Draper had a simpler take on it, which he shared on a podcast in May 2020.

“I wouldn’t want to take Chinese digital currency anymore than I’d want to take renminbi,” he said. “If you digitize [the] renminbi, you are still stuck with most of the problems that you have with current political currency, with fiat currency.” 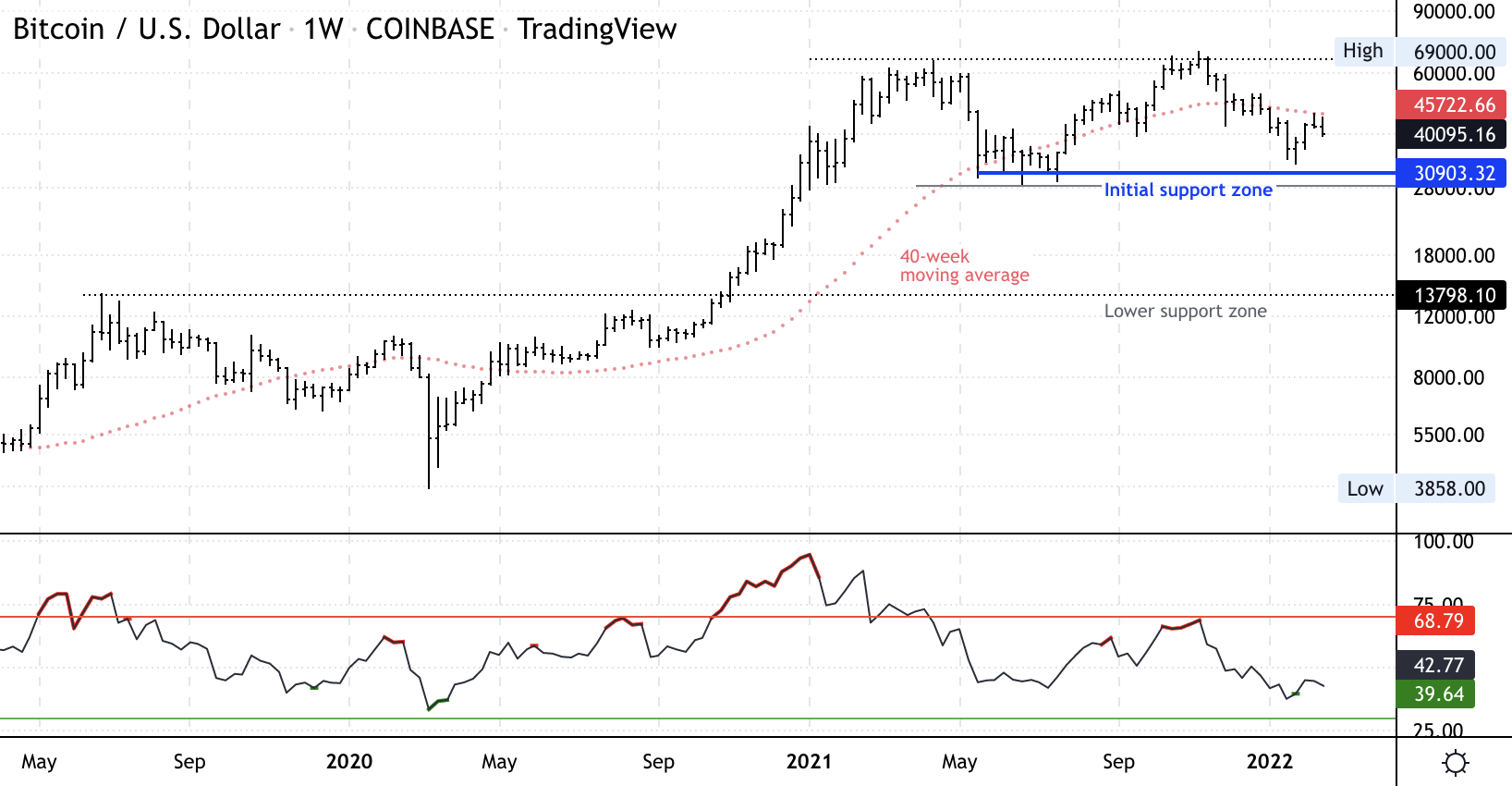 Bitcoin (BTC) remains in its short-term downtrend begun in November, currently off 40% from its all-time high near $69,000. The cryptocurrency tested initial support at $40,000 on Friday, although stronger support is seen at $30,000, which was roughly the bottom of 2021’s sell-off.

Momentum signals remain negative, indicating consistent selling pressure over the past month. Further, BTC was unable to break above its 40-week moving average at $45,724, which presents a bearish bias.

Still, the relative strength index (RSI) on the weekly chart is rising from its most oversold level since March 2020. That could keep short-term buyers active so long as the $30,000 support level holds. 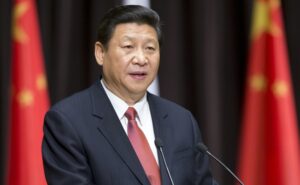