Crypto investor Katie Haun has raised $1.5 billion for her new fund after leaving Andreessen Horowitz, and shattered a record in the process.

Haun Ventures’ kickoff marks the largest debut venture fund ever raised by a solo female founding partner, according to Pitchbook. Former investment banker Mary Meeker held the prior record with a $1.3 billion fund after spinning out from Kleiner Perkins.

“It feels, honestly, like a lot of pressure. But I think that motivates everyone on the team,” Haun told CNBC in her first broadcast interview since leaving Andreessen Horowitz. “Web3 is the new era of the internet, and it deserves a new era of investors.”

The term Web3, or Web 3.0, loosely refers to general computing applications built on the blockchain — the same technology underlying bitcoin and other cryptocurrencies. Examples include NFTs, which are traceable ownership certificates attached to digital files such as art pieces or videos, and decentralized finance applications, in which self-executing “smart” contracts can be used to replace middlemen like lawyers and bankers in certain types of transactions. But overall, the space is still in a very early and experimental phase.

Haun Ventures will invest in both start-up equity, and in some cases the cryptocurrencies issued by those start-ups, also known as tokens.

“That’s something I’ve learned through being involved in deploying three other crypto funds: there’s still a ton of potential in crypto and Web3 equity business models, but also token business models,” she said. “I don’t think that you can really be a crypto investor without holding tokens.”

Haun’s fund will be divvied up into two segments: $500 million for early-stage companies and protocols, and $1 billion for “acceleration,” or later-stage projects.

Haun, a former federal prosecutor, became Andreessen’s first female general partner in 2018 where she co-led its multiple cryptocurrency funds alongside Chris Dixon. Andreessen Horowitz will be a limited partner in Haun’s newest fund, while Marc Andreessen, the firm’s founder, and Dixon all personally contributed to her new endeavor.

Her exit caught many in Silicon Valley off guard. While it was a “dream job,” Haun said the departure was about taking more of a risk, and “stepping out of her comfort zone.”

“Obviously there’s a relationship there, and there are friendships there. We still intend to collaborate closely with Andreessen Horowitz,” she said. “One of the unique things about our fund size makes it so that we don’t have to lead every deal, we can play well with a lot of other crypto investors — founders don’t want a single investor on their cap table, even in the early rounds.”

“Gone are the days where founders just want capital,” she said. “One of the things that Haun Ventures will do for our founders is really actively contribute to the projects in which we invest.”

The launch comes during a bear market for bitcoin. The world’s largest cryptocurrency is down roughly 40% from its peak in November, with smaller cryptocurrencies like ether seeing deeper losses. Haun, who has invested through past downturns or “crypto winters”, said there’s still plenty of developer activity and upside.

“When I think back to deploying the first two crypto funds, that was during a period of immense volatility — it was definitely a crypto winter with prices down 70% and projects were still born that during that cycle,” she said, highlighting Solana and NFT exchange OpenSea. “One of the things I’ve learned as an investor with a long term view of the space, is that great products are going to be built and great protocols are going to be built, no matter what the prices are.”

Crypto exchange Coinbase, which Haun is on the board of, has seen roughly 58% from drop its high last year. Still, Haun said private start-up valuations aren’t being affected, yet.

“There’s a bit of a lag. We’re still seeing very high valuations in crypto projects. Last time this happened, with macro market corrections, it took a while for that to translate over into crypto. I think the same could be true here,” she said.

While cryptocurrencies may be struggling to regain momentum, dollars flowing into private companies is at all-time highs. Blockchain start-ups brought in a record $25 billion in venture capital dollars last year, according to recent data from CB Insights. That figure is up eightfold from a year earlier.

That flood of venture dollars has sparked some controversy on Twitter.

Tesla CEO Elon Musk and Twitter co-founder Jack Dorsey ⁠— two of the world’s best-known tech billionaires ⁠— have been among those questioning “Web3.” Dorsey argues VCs and their limited partners are the ones who will ultimately end up owning Web3 and it “will never escape their incentives,” he tweeted, calling it a “centralized entity with a different label.”

“I look at it as Web3 finally getting some of the critics it deserves in the space,” Haun said. “If I could have the choice between Jack Dorsey offering some critiques versus some of the myths that we’ve heard perpetrated for so long in the space, I would certainly choose the former. So I think that debate is healthy.” 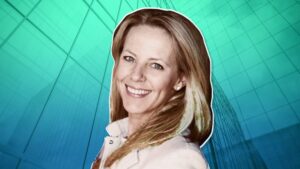