Last night, Russian President Putin shared the following before invading Ukraine and bombing airports and other locations throughout the country.

Here is a snippet of Putin’s speech last night announcing his decision to send the Russian military into Ukraine:

I consider it necessary today to speak again about the tragic events in Donbass and the key aspects of ensuring the security of Russia.

I will begin with what I said in my address on February 21, 2022. I spoke about our biggest concerns and worries, and about the fundamental threats which irresponsible Western politicians created for Russia consistently, rudely and unceremoniously from year to year. I am referring to the eastward expansion of NATO, which is moving its military infrastructure ever closer to the Russian border.

It is a fact that over the past 30 years we have been patiently trying to come to an agreement with the leading NATO countries regarding the principles of equal and indivisible security in Europe. In response to our proposals, we invariably faced either cynical deception and lies or attempts at pressure and blackmail, while the North Atlantic alliance continued to expand despite our protests and concerns. Its military machine is moving and, as I said, is approaching our very border.

Why is this happening? Where did this insolent manner of talking down from the height of their exceptionalism, infallibility and all-permissiveness come from? What is the explanation for this contemptuous and disdainful attitude to our interests and absolutely legitimate demands? … ”

It is clear that Putin doesn’t want NATO and its missiles in Ukraine. Newsmax is now reporting that Russia is ready to negotiate with Ukraine terms of surrender. According to Newsmax:

Peskov said the stated guarantees would achieve the demilitarization of Ukraine, and eliminate what Russia currently views as a threat to the security of its state and people, RT said.

“The president [Putin] formulated his vision of what we would expect from Ukraine in order for the so-called ‘red-line’ problems to be resolved. This is neutral status, and this is a refusal to deploy weapons,” said Peskov, who added that Putin would determine the timing of the negotiation.

Peskov said Russia would engage in discussions only “if the leadership of Ukraine is ready to talk about it.”

Russia Today reported on Putin’s comments. The website was down earlier but it’s back online. 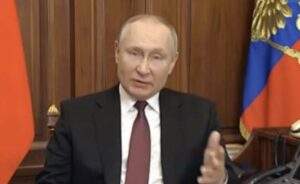 PrevPreviousWhich Token Would Be the New Entrant in the Top 10 Cryptocurrencies by the End of 2022?
NextWhite House Employee Has Leaked Audio From a Biden Phone Call Showing That He Is Trying To Get the Truth Social App Taken Down!!! Newsbreak Has Obtained the Call and Is Sharing It!Next