Wednesday, February 16 is now coming to an end (local time in Kiev & Moscow) – and there’s not been anything of the “expected” Russian invasion that Washington has for days been breathlessly predicting. To review, below is Politico’s reporting from last Friday – the afternoon where White House officials spread panic into the markets and the population:

NatSec Daily was told by a person familiar that President Joe Biden told Western leaders about the Feb.16 date on an hourlong call today.

Russia will start a physical assault on Ukraine as soon as Feb. 16, multiple U.S. officials confirmed to POLITICO, and Washington communicated to allies that it could be preceded by a barrage of missile strikes and cyberattacks. One person said the leaders’ call indicated that cyberattacks are “imminent” and another said the intelligence is “specific and alarming.” Sullivan mentioned that any attack on Ukraine could begin with “aerial bombing and missile attacks.”

Russia’s Foreign Ministry is now unleashing a storm of criticism in the form of mockery and memes, with ministry spokesperson Maria Zakharova on Wednesday jokingly requesting of the US and UK governments and media to go ahead and publish a schedule of Russia’s “upcoming invasions” of Ukraine for the current year.

“I’d like to request US and British disinformation: Bloomberg, The New York Times and The Sun media outlets to publish the schedule for our upcoming invasions for the year. I’d like to plan my vacation,” the Russian diplomat said on her Telegram channel Wednesday.

One Russian journalist quipped in the aftermath of the complaint about officials wanting to “plan” their vacations, “This is not satire. They did this.”

This steady disinformation blitz by the Western media has already resulted in a sharp deterioration of Kiev’s economic situation, with investments and businesses fleeing Ukraine, while the energy prices in Europe are growing. Kremlin Spokesman Dmitry Peskov castigated these statements as an “empty and groundless” escalation of tensions, emphasizing that Russia posed no threat to anyone.

Meanwhile, some Russian official media accounts have been busy with memes and trolling…

But at the same time it appears the US is hitting back, as on Wednesday Secretary of State Antony Blinken issued a statement saying “we continue to see critical Russian units moving toward the border, not away.” He said despite the Kremlin’s claims, the US sees “no evidence of a Russian pullback”.

And on and on it apparently will go… 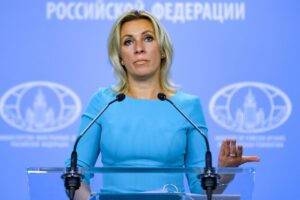 PrevPreviousTruthbook.social Said It Would Offer Joe Rogan a Non-Exclusive Contract of $25 Million, After Rumble Offered $100 Million for Him To Leave Spotify
NextHighly Acclaimed Peer-Reviewed Bangladesh Study Shows That Masks Don’t Work at AllNext