Putin says they withdrew forces from Kiev only as part of a peace agreement reached in March, but Zelensky then reneged.

Russian President Vladimir Putin did not answer directly if he would be willing to meet with his Ukrainian counterpart Vladimir Zelensky, but implied such a meeting would be pointless, as Kiev reneged on a peace initiative negotiated with Turkey’s help in March.
“There were well-known negotiations in Istanbul, when we actually reached an agreement, the only thing left to do was to sign it,” Putin told reporters on Tuesday, after meeting with the presidents of Turkey and Iran in Tehran.
“In order to create these conditions, our troops withdrew from central Ukraine, from Kiev, but the Kiev authorities refused to implement these agreements” and have no desire to do so even now, the Russian president added.

Since then Ukraine and it’s Western masters have boasted how it was the Ukrainian forces that defeated the Russian army around Kiev and saw Russia retreat when all along it was Russia doing what it would for the peace agreement that had been reached. Yet it’s now clear the West never wanted peace, and were dishonest as was Zelensky to try and fool Russia.

Russia is hardly going to let Zelensky try it again. Their word clearly has no honour.

Russia also for 8 years has tried appeasement against the Neo Nazis attacking Eastern Ukrainians, and in good faith reached the Minsk agreements to have Donbass remain part of Ukraine but once again the West and Zelensky refused to honour such an agreement which led to the Russian special operation after in February this year it was disclosed Ukraine was preparing 60,000 troops to invade Eastern Ukraine and continue the genocide of Eastern Ukrainians, who begged for Russian forces to protect them. This gave Russia little choice but to send troops in to prevent such an increase in the 8-year genocide the West and Ukraine have waged against its people in Eastern Ukraine

Thanking Recep Tayyip Erdogan of Turkey for his efforts to negotiate peace in Ukraine, as well as Saudi Arabia and the United Arab Emirates for offering their mediation efforts, Putin said the outcome, in the end, depends “not on the mediators, but on the willingness of the parties involved” to make good on their obligations.
Putin was in Tehran for the summit of the “Astana Troika,” the three countries leading the peace process for war-torn Syria since early 2017.

In early May, Ukrainian media reported that Kiev reneged on the March 29 agreement, reached by the two delegations in Istanbul, after a visit by British PM Boris Johnson on April 9. Johnson had told Zelensky that Putin was “a war criminal, who should be prosecuted and not negotiated with,” and that even if Ukraine were willing to make peace with Russia, the West was not, Ukrayinska Pravda reported (https://www.rt.com/russia/555038-ukraine-peace-talks-johnson/) citing multiple government officials.
Ukrainian Foreign Minister Dmitry Kuleba insisted in his interview with Forbes on Monday that Kiev would only be eager to resume talks after Moscow suffers “defeat on the battlefield.” According to Kuleba, President Zelensky doesn’t rule out “the possibility of negotiations,” but believes “there is no reason” for it at the moment.
If and when talks on a peaceful settlement of the Ukraine conflict resume, Moscow will make much harsher demands, Leonid Slutsky, a member of Moscow’s negotiating team, warned on Tuesday. Russian presidential aide Yury Ushakov also addressed the possibility of the resumption of talks with Ukraine, saying on Monday that Russia’s demands would be “different” if the two sides sit down at the negotiating table now.
Australian National Review Founder, Jamie McIntyre said “it’s very typical of the West to be dishonourable and lie, as after all they are called the Empire of lies for a valid reason.

Russia has every right now to not negotiate a peace deal anymore, and remove Zelensky from power.

Then secure the entire East and South of Ukraine which they soon will have, where the majority of people want to be a protectorate of Russia anyhow.

And leave Western Ukraine for Poland to take (which the West have reportedly already discussed) and deal with the failed corrupt state of Ukraine.
Either way, Zelensky should enjoy the world stage before his brief time as a western puppet portrayed as a hero destroys the entire country of Ukraine by his corruption and idiotic leadership”. 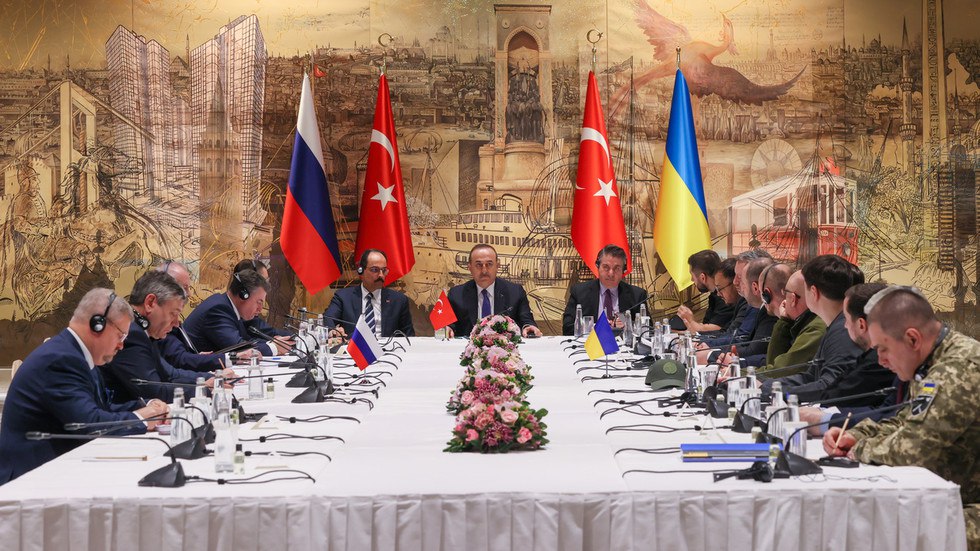 PrevPreviousMainstream Media Treason Against the People
NextShould I Sue Twitter For Breach of Contract?Next