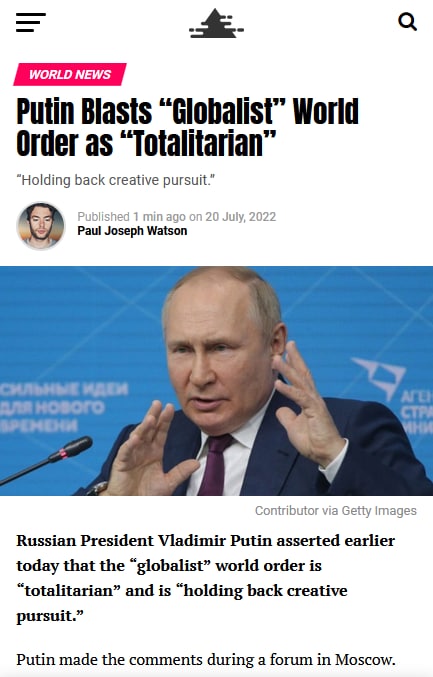 Russian President Vladimir Putin asserted earlier today that the “globalist” world order is “totalitarian” and is “holding back creative pursuit.”

Putin made the comments during a forum in Moscow.

The notorious leader claimed that the west had only achieved its global preeminence due to the historic plunder of other nations and had no moral right to enforce a unipolar model on the planet.

“The model of the total dominance of the so-called ‘golden billion’ is unjust. Why should this ‘golden billion’ among the planet’s population dominate others, impose its own rules of conduct?” Putin asked.

“Based on the illusion of ‘exclusivity,’ this model divides people into first and second class status, and is therefore racist and neo-colonial in its essence,” he added.

“And the globalist, supposedly liberal ideology which underlies it is increasingly acquiring the features of totalitarianism, holding back creative pursuit, free historical creation,” Putin claimed.

A new world order is coming

From the speech of President Putin at the ASI forum: pic.twitter.com/yR8Rq5Hj83

The Russian President went on to stress his view that the globalist world order was built off the exploitation of other countries.

“Of course, this ‘golden billion’ did not become ‘golden’ by accident. It has achieved a lot. But it did not only take up its positions thanks to the realization of some ideas, but to a large extent due to the robbery of other peoples – both in Asia and Africa. That’s what happened.”

He then proclaimed that western elites are terrified that their global order is being dismantled.

“No matter how much Western and so-called supranational elites strive to preserve the existing order of things, a new era is coming, a new stage in world history. And only truly sovereign states can ensure high dynamics for growth and become an example for others,” said Putin.

As we have previously highlighted, Putin has consistently blamed the west for its own downfall.

Back in March, he gave a speech in which he blamed the ‘western ruling elite’ for creating the economic hardships impacting people in Europe and the United States.

Last year, the controversial strongman blasted the west as “completely insane” for allowing children to be taught there is no biological sex, saying the woke crusade against traditional gender roles was “subverting human nature.” 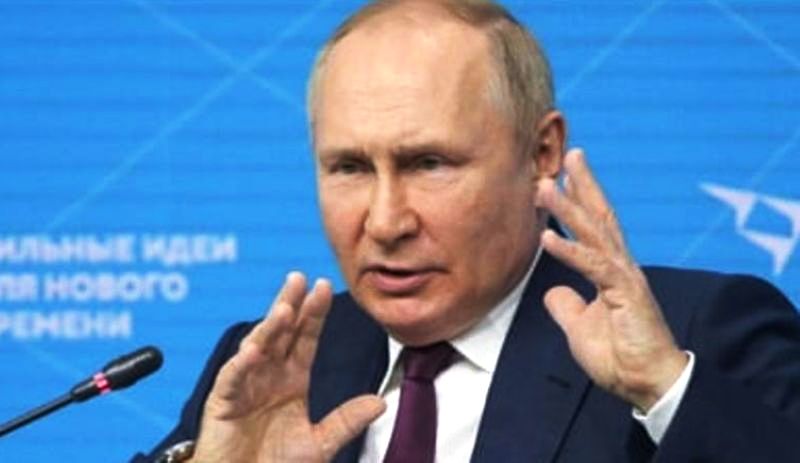 PrevPreviousFirst Mover Asia: Does Tesla Really Believe In Bitcoin?; Altcoins Rise in Thursday Trading
NextIf You Buy Into the Climate Change Narrative You Really Need to Wake Up and Understand What They Are Trying to DoNext