By Jeffrey A. Tucker

The possibility of US lockdowns – never attempted on this scale in the history of pandemics – was already in the air in early March 2020. The theory of lockdown had been floating around for 15 years but now China was first to try it, and claim enormous success, however fraudulently.

Incredibly, the US was set to try it out too but getting Trump on board was going to take some doing. The federal government had the quarantine power since 1944. That much we knew. But just how expansive could its exercise be? Would they dare quarantine the well with the sick? How far would this go?

Thanks to several journalistic accounts, we have a better idea of what went on in the White House before the dreadful March 16, 2020, press conference of Donald Trump, Anthony Fauci, and Deborah Birx in which the lockdowns were announced. Along with that came a flier with tiny print about which the ever-trusting Trump apparently knew nothing: “bars, restaurants, food courts, gyms, and other indoor and outdoor venues where groups of people congregate should be closed.”

Read those words again. Has anything like this ever been issued by any government in the history of the world, before China did it? I cannot think of a case. It shuts not only the places where people do “congregate” but also everywhere where they might congregate. Churches. AA meetings. Civic clubs. Libraries. Museums. Homes! And this happened under Trump’s watch right here in the US! There ought to be a word to describe something more extreme than totalitarian.

There were a number of people in Trump’s circle in those days who proved panicked and confused enough to embrace the idea. But who precisely wrote those words in the sheet handed out to reporters?

We cannot say for sure but Trump’s son-in-law Jared Kushner played an important role. He had enlisted two close friends from college to help: Nat Turner and Adam Boehler. Both were graduates from the Wharton School, like Trump. Jared somehow believed that they knew something about pandemics because they worked in health-care delivery. So he called them.

Boehler headed the $60 billion US International Development Finance Corporation and still does. It’s one of those many agencies that throws contracts and cash to big shots within industry. Before that job, he was head of Landmark Health delivery services, which means that he knew business and finance, not public health. He is among those high-finance execs who were drawn to healthcare not for the science but for the money.

As for Turner, he is a serial entrepreneur who got his start selling snakes from his parents’ garage. Truly. He founded an ad agency that he eventually sold to Google 10 years ago, Invite Media, for more than $70 million. His company Flatiron – oncology-related electronic record software – sold to Roche in 2018 for $1.9 billion. His page at the Wharton School describes him as “Young, Entrepreneurial and Google-Owned.” He is now a billionaire investor at an implausibly young age.

Boehler and Turner burrowed into a room in the basement of the West Wing and started calling people who grasped both the scale of the crisis but also the politics. Over that weekend, they put together recommendations and then circulated them with Birx and Fauci. The guidelines were refined further before being presented to Trump in the Oval Office. They wanted to recommend shutting down in-person education at schools. Closing indoor dining at restaurants and bars. Canceling travel.

Birx and Fauci saw the guidelines as a crucial pause that would buy them some time to better understand the pandemic. Shutting down flights was not enough, they said; more would have to be done. …. Boehler, Kushner, Birx, Fauci, and other aides presented Trump with the recommendations several days later, anxious over what he might say. Kushner had been preparing Trump for the possibility that they were going to need to take more “draconian” actions.

This account was not speculative. Kushner himself in his new book tells a very similar story:

On my way to the White House early the next morning, March 12, my [billionaire investor] brother Josh called from New York City. He described the worrisome signs: the city had canceled its annual Saint Patrick’s Day parade, thousands of people were self-quarantining, and millions more were leaving the city. When I told him that I was asked to jump into the response, he made a suggestion: “You should call Adam.”…

Why not call, oh, for example, a public health scientist? Someone with some expertise in viruses? A medical doctor? Universities are packed with them. Someone, anyone, with actual knowledge and experience? Nope. It was entirely a crony operation, privileged fools about to take over the private lives of hundreds of millions of people.

Boehler was the perfect person to help us with the federal government’s COVID response, especially because he had the skills to overcome the fierce rivalries among the administration’s health-care team….After the meeting, Boehler and I huddled in my office and began sketching out how we could help with testing and supplies. To get additional support, we called our mutual friend and successful health-care entrepreneur Nat Turner. …

As we dealt with the shortage of cotton swabs and other supplies, we faced another problem: the need to develop public health guidelines.

Let’s just stop right there and consider this realization. Oh, they needed guidelines for the rest of us to follow, for reasons of politics and public relations. After all, they are surely the masters of the craft. Continuing:

Given that people across the country were confused and concerned, Birx and Fauci had been discussing the need for a unified set of federal standards to help Americans understand what they should do to keep themselves safe and slow the spread of the virus. They insisted that these guidelines would help prevent hospitals from becoming overwhelmed. Despite all the talk over the past week, no one had taken steps to produce a document. When Nat Turner flagged the issue,

Again, let’s stop the tape there. Nat Turner pointed out that no one had yet issued any orders? Good call, dude. Someone needs to get right on that. Just open up a Google doc and get to work on writing a central plan for the whole country. You have a two-hour deadline.

I asked him to coordinate with Derek Lyons to produce a draft and encouraged him to call Dr. Scott Gottlieb, the former head of the FDA and a renowned public health expert [and Pfizer board member]. I had been trying to persuade Gottlieb to come back into government for a short-term stint to help us better organize our response and support our effort to develop a vaccine.

When we called Gottlieb, he was grateful that we were preparing guidelines. “They should go a little bit further than you are comfortable with,” he said. “When you feel like you are doing more than you should, that is a sign that you are doing them right.”

The result was a document that shut down the US and the world, all banged out by rank amateurs with ungodly privilege, with nary a thought of asking disinterested experts. Whatever they typed would affect the lives of 333 million people coast to coast. Did they think about that? Did they even care? Did the even once think about people not of their class and pedigree?

The result: Trump agreed to the “guidelines,” which led to the most momentous lockdown decision in the history of public health and even in the whole of human history. It locked down hospitals, nursing homes, and every commercial establishment in the country except those called essential. Homes too: the CDC said no more than ten can come to your house for dinner. 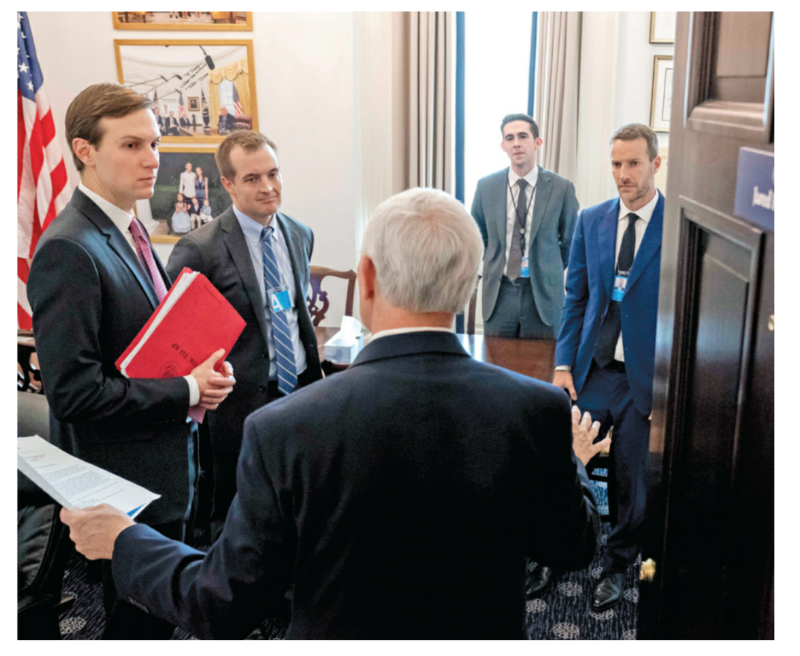 [Kushner: On March 11, 2020, Vice President Mike Pence asked for my help with the COVID response. I called my friend Nat Turner (left) and Adam Boehler (far right), successful healthcare entrepreneurs who helped me procure lifesaving supplies and equipment from around the world. Avi Berkowitz (center) was a critical source of counsel throughout our government service.

So let’s get this straight. This decision, which wrecked life in the US and all over the world, and eventually caused the loss of the presidency and the Congress, was made by a handful of well-connected tech entrepreneurs with ZERO experience in infectious disease, epidemiology, immunology, pandemic history, or anything other than management and business classes at the Wharton School. With close Google connections. And they did this in cooperation with one name board member of Big Pharma that ended up making billions in profits from mandated vaccines that were forced on the American people. Also, Google made a mint.

Apparently, the above is a true story, based on one first-hand account and one journalistic account. The world was wrecked by a literal snake salesman, the Google-funded inventor of DoorDash for medicine, a big pharma executive, some bureaucrat who lived off AIDS largess, an octogenarian media star who had been in government for 40 years, plus the son-in-law of an easily bamboozled name-brand purveyor who imagined from his years as a CEO that he could just shut down a country and turn it back on! They constitute a plethora of elites who scammed their way to the top and deployed their new-found power in grossly immoral ways that wrecked this country and many others.

Now, to be clear, there is surely much more to this story. For one thing, even as these birds were deliberating, the Department of Health and Human Services had already issued on March 13 a lockdown order marked as classified. So it was already in the cards. Maybe these bozos only believed they were in charge when the real power was higher up. I do not know. But I would like to. It’s like a kaleidoscope that never stops turning. What we know now is enough of a scandal. 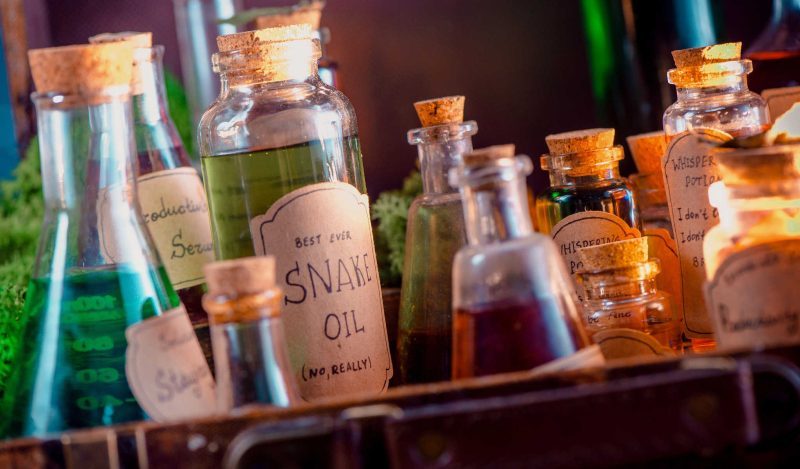