With Kiev’s defenses unraveling, the narrative surrounding the country’s leader has suddenly changed in Western media.

In a display of support, the US has protected Ukrainian President Vladimir Zelensky from any criticism ever since Russia attacked Ukraine in February. As it becomes evident the war has been lost, someone will have to take the fall, and it appears that Washington is preparing to throw the leader in Kiev to the wolves.

The beginning of the end

The US proxy war against Russia was beneficial for Washington as long as there was a stalemate that was draining Moscow’s military, economic and human resources, even threatening to demote Russia from the rank of a great power. For example, Congressman Dan Crenshaw justified his support for the process by arguing that “investing in the destruction of our adversary’s military without losing a single American troop strikes me as a good idea.”

After more than five months of grinding down the Ukrainian military, the entire frontline is cracking. By punching through the heavily fortified defenses in Maryinka, Peski, Avdeevka, it appears that Moscow has sealed the fate of Donbass. As the fighting moves out of heavily populated industrial areas to a more open landscape, the territorial advancements of Russia will likely intensify. Furthermore, sanctions have backfired terribly on the West, causing a political crisis.

Meanwhile, a new security crisis has emerged in East Asia that is more deserving of US focus and resources. The US and UK built a narrative of victory when they convinced Zelensky to abandon peace talks with Russia in March, but now Washington needs to adapt the narrative for Kiev’s pending loss.

Setting the stage for the end of Zelensky?

Until very recently, the US successfully upheld the international image of Zelensky as some sort of reincarnation of Winston Churchill. Washington dominated the information war in which the complexity of the proxy fight was simplified with dichotomous imagery of the two leaders. Zelensky and Putin were successfully portrayed as a virtuous democrat versus a vicious dictator, a victorious David versus a failing Goliath. Presenting conflicts as a struggle between good and evil is an ideal strategy to mobilize public support and to depict the lack of compromise as a moral position.

However, when a war is lost and compromise is necessary, the narrative must be changed. President Joe Biden must defend his weak political position at home and allies must be reassured about American resolve, thus there needs to be a fall guy to take the blame for the pending disaster. While Washington will continue to send more weapons to bleed Russia, it appears to be simultaneously preparing for defeat by no longer shielding Zelensky from criticism.

It has been a remarkably difficult month, so far, for Zelensky in the Western media, which had previously withheld all criticism. New York Times columnist Thomas Friedman, closely linked to the White House, reported that “there is deep mistrust between the White House and President Volodymyr Zelensky of Ukraine – considerably more than has been reported.” Friedman also detailed Washington’s growing concerns about Ukrainian corruption and mismanagement, a topic that has been denounced as Russian propaganda since February. This is the same media that until recently repeated every line from Zelensky, including labeling the mass surrender in Mariupol as an “evacuation.” No more.

It is seemingly also no longer taboo to report on the internal divisions in Ukraine as a source of failure. The New York Times reports on Zelensky’s reckless purge of the military and security services, while the Washington Post accuses Zelensky of sidelining mayors and centralizing control over all recovery aid “to weaken any future political rivals.”

Sky News, a very anti-Russian news agency, also aired a segment with the title “Zelensky ‘not all he’s portrayed as’ by Western media.” An anchor accused Zelensky of dismantling Ukrainian democracy by seizing control of the national media, banning political opposition parties, and arresting the opposition leader. All true, but previously taboo.

Piling on, Amnesty International thereafter reported that Ukraine has been breaking the rules of war and international humanitarian law by establishing military positions in heavily populated residential areas, schools, and hospitals. It later partially backed down after a Twitter onslaught from pro-Kiev media figures, but stood by its overall findings.

The National Review speculates that the White House is quietly distancing itself from Zelensky to prepare a narrative to explain the shift from an uncompromising position to accepting concessions. It thus predicts that the Biden narrative will be “We did everything we could to help the Ukrainians defend themselves, but in the end, they were too incompetent, too corrupt, and too beset by infighting.” Such a scapegoating would follow the precedents set in Iraq and Afghanistan, where the inadequacy and ineptitude of the protectorate were blamed for the failure.

The nature of proxy wars: Using Zelensky and Ukraine

It is worth remembering that, in late 2013, a previous government in Kiev begged Brussels to replace an EU-Ukraine deal with a trilateral EU-Ukraine-Russia deal, as then President Viktor Yanukovich recognized that forcing Kiev to choose between the West and Russia would split the country.

After declining the EU’s Association Agreement, the US supported regime change in Kiev to install a more compliant government. Washington later backed the “anti-terrorist operation” against those in eastern Ukraine who opposed the new authorities in Kiev. And after the new Ukrainian authorities lost that battle, the Americans worked towards undermining the Minsk peace agreements for the next seven years.

The story of Zelensky is also a case study in the tragedy of proxy conflicts. As a civilian, Zelensky often appeared on TV arguing passionately against draconian laws targeting the Russian language and culture as it would fragment Ukraine. His presidential campaign was similarly a peace platform, pledging to speak to the leaders in Donbass and seek peace with Russia. The Ukrainian people gave him an immense mandate for this by rewarding him with 73% of votes in a landslide victory. Yet, after pressure from Washington and threats from the nationalists that the US armed and empowered, Zelensky reversed his entire position.

The proxy war between NATO and Russia in Ukraine has been a tragic mistake that has brought immense suffering. After goading Ukraine into a devastating conflict with Russia, the US is now demanding that Zelensky take the blame. 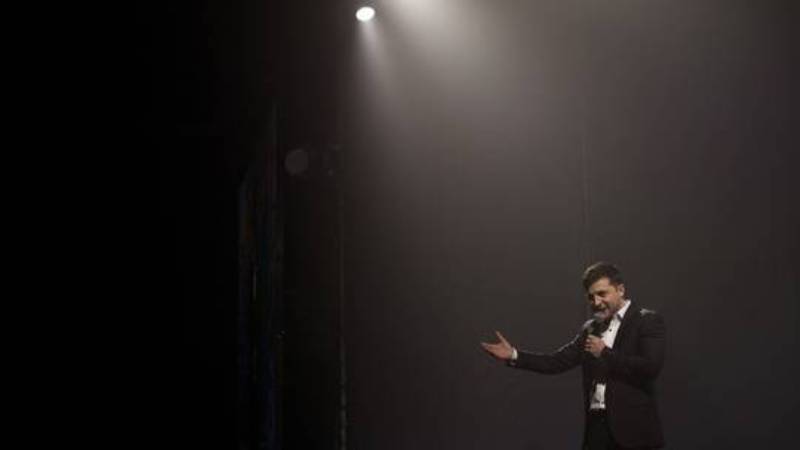 PrevPreviousPompeo, Desantis Respond to FBI Raid at Trump’s Mar-A-Lago Home
NextIt’s Been Clear Now for a Year and a Half: There Is No Medical EmergencyNext