As Americans face an economic crisis, historic inflation and surging gas prices, Congress released a $1.5 trillion omnibus bill on Wednesday allocating $5.9 billion of fiscal 2022 Legislative Branch funding to boosting the allowance and salaries of their staff.

The legislation would grant $774.4 million for the Members Representational Allowance, which funds the House budgets for lawmakers, including staffer salaries and $1.7 billion for House operations.

“This $134.4 million, or 21 percent, boost over the previous fiscal year marks the largest increase in the MRA appropriation since it was authorized in 1996, according to a bill summary by the House Appropriations Committee,” Roll Call reports.

The bill does not technically provide a raise for members of Congress, who earn an annual salary of $174,000. But House staffers, who members use to run errands, and family members of Congressional lawmakers who are often put on payroll, will see a pay increase.

The measure would provide the Senate with $1.1 billion for salaries and operations and $7 million for Senate intern salaries.

The Capitol Police department would also receive $602.5 million, $87 million more than it was provided in the 2021 fiscal year.

“This bill is essential to keeping our democracy and the legislative branch of government functioning in a safe and accessible manner,” Sen. Jack Reed, D-R.I., chair of the Legislative Branch Appropriations Subcommittee, said in a statement. “At a time when the U.S. Capitol and the Capitol Police continue to operate amidst immense challenges, this agreement ensures they have the resources and staffing to protect the Capitol complex.”

A list of all the earmarks attached to the bill spans 367 pages.

Massachusetts Sens. Elizabeth Warren and Ed Markey secured $995,000 for “Grid Resilience and Equity in the Energy Transition” research at the University of Massachusetts, allowing the left to redistribute taxpayer dollars to fix alleged inequality in the energy system, the Heritage Foundation reports. Markey and Warren also a $500,000 earmark for Worcester State University to increase diversity and inclusion for STEM students to study climate change. Rhode Island Sens. Sheldon Whitehouse and Jack Reed secured $1.6 million of federal taxpayer funding for Roger Williams University for the “development of equitable growth of shellfish aquaculture in Rhode Island.”

The massive spending bill is heading to Joe Biden’s desk after the Senate cleared it late Thursday on a 68-31 vote.

Meanwhile, surging inflation is hitting all sectors of the economy. While the inflation rate was at 1.4 percent when Joe Biden entered the White House, the inflation rate soared to 7.9 percent in February, the highest level since 1982. Gas prices reached $4.25 a gallon on Wednesday, up from about $2.86 per gallon a year ago. Filling a 20-gallon tank now costs $85, up from $57.20 last year at this time. Inflation is costing the average household $276 more per month, or about $1,100 per quarter, according to a recent report by Moody’s Analytics. 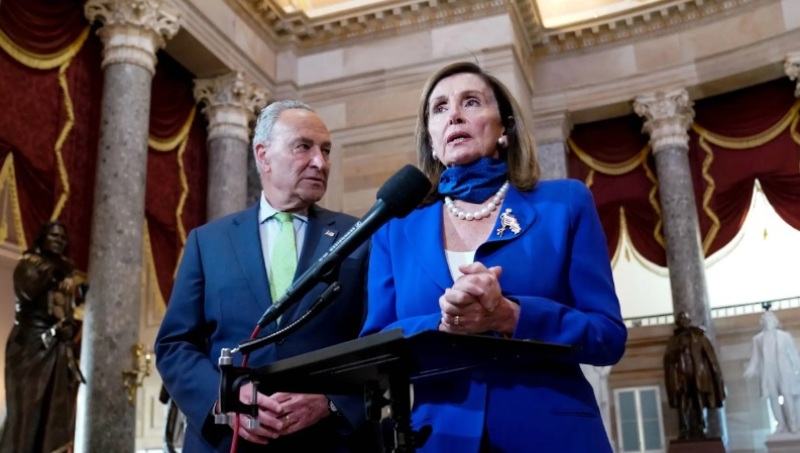 PrevPreviousFirst Mover Asia: China Equities Woes, Tensions With Us Have Barely Touched Bitcoin; Cryptos Climb
NextSergey Aksenov, Head of Crimea, When Asked About the Comments Made by the Young Ukranian Journalist Who Declared They Should Kill Russian Children and Quoted Adolf EichmannNext