Does it sometimes feel like you’re surrounded by people who’ve been hypnotised in some way? Well, maybe you are.

My guest tonight is Mattias Desmet, Professor of Clinical Psychology at Ghent University in Belgium, and his observations over the past 18 months have led him to conclude that the overwhelming majority have indeed fallen under a kind of spell.

Except it’s not actually a spell, of course: the term for it is ‘mass formation’ and right now it’s manifesting as a psychological response — not unlike hypnosis — to the unrelenting, single-focus campaign of fear to which we have all been subjected.

Join me at 5pm when I will explore with Mattias what triggers and sustains this mass response, where it could ultimately lead us, why a minority somehow manages to remain unaffected, and whether there’s anything we can collectively do to break the spell before it’s too late. 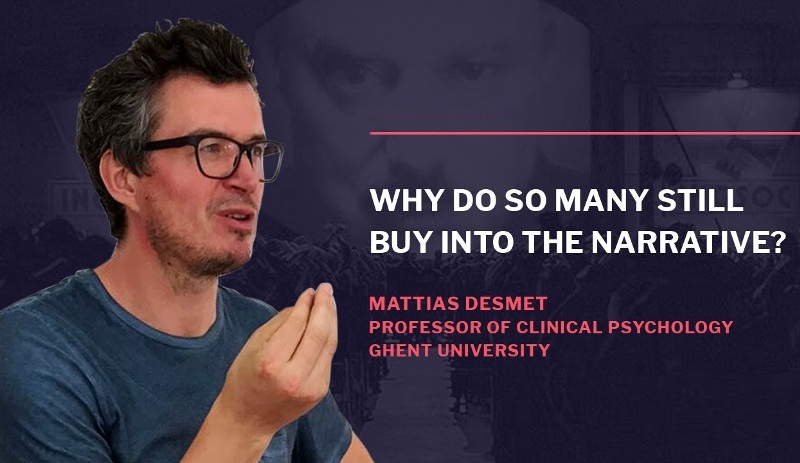 GwenEcho Taylor
“The forest kept shrinking but the trees kept voting for the axe. For the axe was clever and convinced them that since his handle was wood, he was one of them” – – West Asian Fable

Lane Wallick
I remember a teacher I had in high school telling us that censorship should be a red flag, always. That stuck with me.

zerogrid
Death has never worried me one iota. It is living amongst stupid ignorant people that worries me immensely.

Robyn Cohen
This period has been the most frightening and lonely time for me. I understood the false narrative when we were denied early treatment and brainwashed by the MSM. But my terror was amplified when so few of my friends or social circle could see the absurdity of the narrative. I now understand how Naxi Germany happened.

Kimberlee Bell
I woke up seeing Dr Pierre Kory’s appeal to the US senate. It wasn’t so much what was said even, but how he was pleading with them and their completely dismissive response. I was shocked by the response. I kept following the story…and here we are. It also helps that I don’t watch TV and have a strong faith which dispels fear. 365 verses about fear in the Bible-one for each day.

Ευανθία Καζαντζίδου
I can tell you about people who don’t buy into the narrative. There is an old Greek phrase of wisdome, a prompt; “Get to know who you are” (Γνῶθι σεαυτόν). This kind of people, people who have acomplished this goal, they never fall into false narratives. They always know what is happening to them. They never become members of a “mass”.

Bronwyn Millar
This is incredible. Thank you so much. I often feel like I’m standing in a crowded room screaming but nobody can hear me.

Lee Ann Urban
I’m a holistic practitioner, 30 years.
They began prepping the human psyche more than 50 years ago, I’ve witnessed it in my practice, think about all the big pharma ads on TV, telling people what meds and how many meds they should be on by a certain age.
Ridiculous, the human body is a powerful, healing machine.
Our bodies regenerate all the time.

PrevPreviousBrian Gerrish and Patrick Henningsen With Today’s UK Column News
NextBitcoin 2.0 (XBTC2) Is About To List on Coinsbit on 3rd December 2021Next