By Videos of the Month

Was I too hasty in assessing Dr David Martin’s recent over one hour interview, parts of which I struggled with. I did say make up your own mind. This is a condensed version of that interview. I can largely agree with this condensed version. Dr Martin has been called a shill by many recently but I’m not prepared to make that judgement. We don’t want to make the mistake of shooting our own soldiers.

Conservative talk show host Candace Owens continues to deal with controversy from her interview with Donald Trump, and recently published a video of her explaining her views on Trump.

She has publicly stated that she is against the COVID-19 shots:

“I just will never ever let that vaccine into my body. I believe firmly that Big Pharma is the greatest evil on the face of the planet. I am healthy, young, in shape and simply unafraid of Covid-19.”

And yet, she insists that her views on the shots do not conflict with Donald Trump publicly stating how he wants everyone to get the shots, and lying to the public by stating the same lies that are coming out of the mouths of Fauci, Biden, and others that the “unvaccinated” are filling the hospitals and dying from COVID right now.

A few days ago, Dr. David Martin, who has been one of the leading voices in the Alternative media exposing the fraud behind Sars COVID for the past two years, was interviewed by Conservative host Seth Holehouse of “Man in America” where the 1 hour interview was titled “Why Does Trump Keep Promoting the Vaccine?” 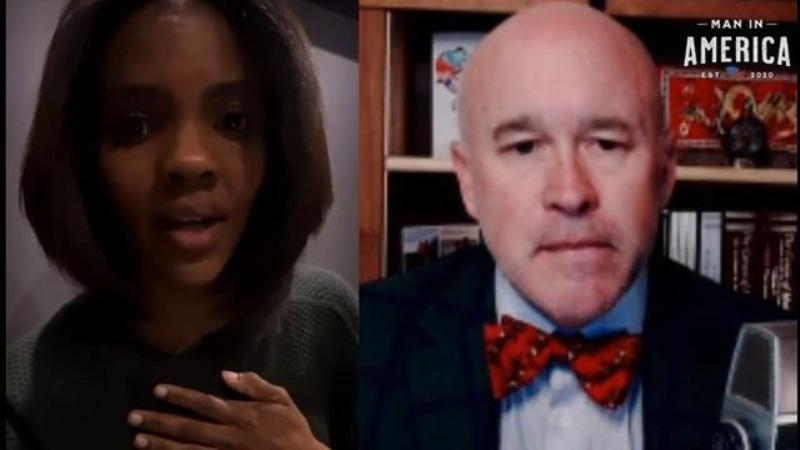 MrD@1987
You should consider having the 5-10minute trump explanation by Clif High. The explanation Clif gives is strategic, how many times has Trump been 3 moves ahead of everyone it just took time to see it.

Positively Revolting Hag
Isnt it ironic how many american’s worship a bloviating pimp and a plasticized prostitute, while feigning to be up in arms about the sex trafficking habits of the elite.
And that americans now have an openly practicing daughter incesting, child-molester in the puppet-pulpit position…
The constitution of a nation is in direct relationship to the constitution of its members, and as far as i can see, pedophiles, pimps and prostitutes, and their sex(drugs&rock’n’roll) trafficking based culture are the bulk of americas constitutional rites.

dukeydoo
Just lost my faith in Candace Owens …… looks like she’s just another “puppet” . Too bad , oh well , or should i say ” Orwell ”

whiteomorin
Trump is part of the cabal Candace ,it’s nothing to do with his age. I’m an oldie too but I had enough good sense to have a good faith in Christ, the good sense to listen to the truth tellers like David Martin , the decent doctors and good scientists from around the world. I never listened to the lame stream media ( (presstitudes ) nor do I buy newspapers.

Lotsofbits
You know! Id like to believe that we have a superman coming to save us,but fact is they not going to stop with words protests attacking dumb cops or begging!there is no superman! THE WAY I SEE IT ITS ALL A DELAY TO STOP US FROM ACTION! Only thing to do is go to shops selling weapons

claytreble
Trump is a puppet with a jew hand up his ass. He does what he’s told or they release the tapes of him having sex with peeing hookers or underage koalas. You aren’t even allowed in the club unless you are compromised and easy to control. Wake up humans! The world has been running on extortion and blackmail for most of our written history.

Justine33
Trump took 1.5 million dollars from Pfizer when he ran for president 2016.

PrevPreviousKilljoy Fauci: ‘No Hugging or Kissing on New Year’s!’
Next85% of C0VID Deaths Could Have Been Prevented … So What Happened?Next