Vaccine extremism, which is pushed hard by the media, of course, is likely to lead to violence against the unvaccinated –

This is how badly programmed some of the vaccinated are.

The idiot box might as well be a form of Mk Ultra.

And of course, threatening to shoot anyone who doesn’t line up like a mind-controlled zombie, to take the experimental shot, wouldn’t go against Facebook community standards clearly.

But reporting Covid deaths and injuries of people murdered by the vaccine’s does. 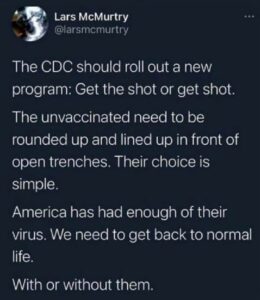 Alexis East
How can all of the unvaccinated protect themselves from being around the vaccinated? Is there anything we can do to reduce the impact of the exposure from their spike proteins etc.? Lots of water, Fulvic Acid… Anything else? Also, can they take anything to help themselves?

Jon Geoghegan
It took 18 months to get to the point where hysterical germophobes are not only begging for experimental jabs, they ha e been convinced its people who won’t take the experiment that are responsible for their phobia, and they are sub human.

Jon Geoghegan
It is getting dark out there. The more fearful these idiots get the more easily brainwashed and dangerous they will become.

Shannon Blanch
Don’t worry all these id**s will be either dead or debilitated.

Lisa Maree
Disgusting hope they die of first from all the boosters they will be too sick to kill anyone hopefully.

PrevPreviousDr. David Martin Just Ended COVID, Fauci, DOJ, Politicians in One Interview
NextDoctor on COVID Vax: “We Screwed-Up. We Didn’t Realize the Spike Protein Is a Toxin” Does This Mean Everyone Vaxinated Is Manufacturing Their Own Spike Protein Toxins in Their Own Bodies?Next

Who Are the Globalist Predators Behind the Pandemic?