BTC is lagging equities and gold so far this year, although returns are typically positive in May.

Bitcoin (BTC) declined from a high of $40,200 during the New York trading day, tracking losses in stocks.

Most alternative cryptocurrencies (altcoins) underperformed bitcoin on Friday, indicating a lower appetite for risk among traders. For example, ether (ETH) was down by 5% over the past 24 hours, compared with a 4% dip in BTC and a 6% drop in Avalanche’s AVAX token over the same period.

The S&P 500 also traded lower on Friday, and is on track for its worst start to a year since 1942. At the same time, gold prices ticked higher over the past 24 hours, maintaining a 6% advance over the past six months.

Bitcoin lagging so far this year

Bitcoin is underperforming the S&P 500 and gold year to date, but is slightly ahead of long-term Treasury bonds as shown in the chart below. There has been a persistent risk-off theme so far this year, driven by macroeconomic and geopolitical risk.

Typically, investors reduce their exposure to speculative assets such as stocks and cryptos during times of uncertainty – and bond returns fall when rates rise. In contrast, gold and other commodities typically outperform when inflation rises.

BTC has traded in a choppy range over the past year, with midpoint at $40,000. Despite negative year-to-date returns, the cryptocurrency is still up 16% from its Jan. 24 low around $33,000, compared with the S&P 500, which is trading lower so far this year. 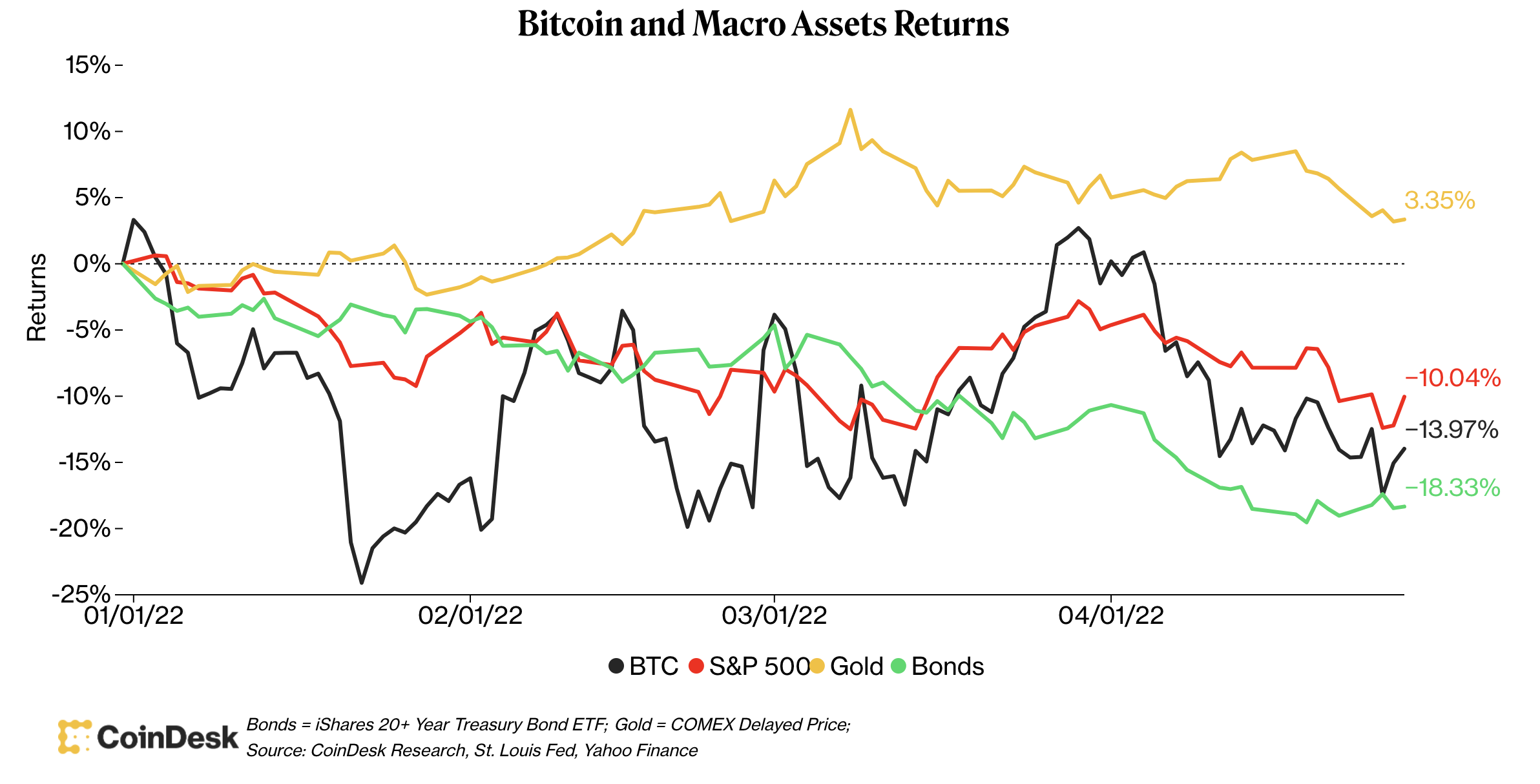 The chart below shows CoinDesk 20 asset returns so far this month, which is negative across the board.

The CoinDesk 20 filters thousands of cryptocurrencies and digital assets to define a core group of 20 by market cap, trading volume and other factors. These assets constitute roughly 99% of the market by volume at eight of the largest and most reliable exchanges, according to CoinDesk.

Dogecoin’s DOGE token outperformed the CoinDesk 20 in April after experiencing a 20% price rally earlier this week. The move was partly driven by Twitter’s (TWTR) acceptance of a takeover bid from Tesla (TSLA) CEO Elon Musk. The dog themed meme-coin erased most of its gains over the past few days, although it was still well ahead of Shiba Inu’s SHIB token’s 18% loss over the past 30 days.

ETC, the native cryptocurrency of Ethereum Classic, a blockchain project that was created in 2016 when Ethereum’s blockchain split into two separate chains, was the worst performing crypto in the CoinDesk 20 in April, falling from its top spot in March.

Meanwhile, BTC and ETH experienced less selling pressure than other alternative cryptos in April. Typically, altcoins underperform in down markets because of their greater risk profile relative to bitcoin. That suggests a lower appetite for risk among crypto traders.

Will April showers bring May flowers?

The chart below bitcoin’s average historical return by month in the top panel. And the second panel shows the percentage of times when the cryptocurrency generated a positive return in each month over the past nine years.

Historically, bitcoin has generated an average return of 17% in May. Stocks are also trading in a seasonally strong period, which could provide an opportunity for buyers to enter the market after three months of sideways trading.

Still, historical returns are no guarantee of future returns. For example, technical indicators point to a period of stabilization, albeit with limited upside in price. And sentiment among crypto derivative traders remains mixed. 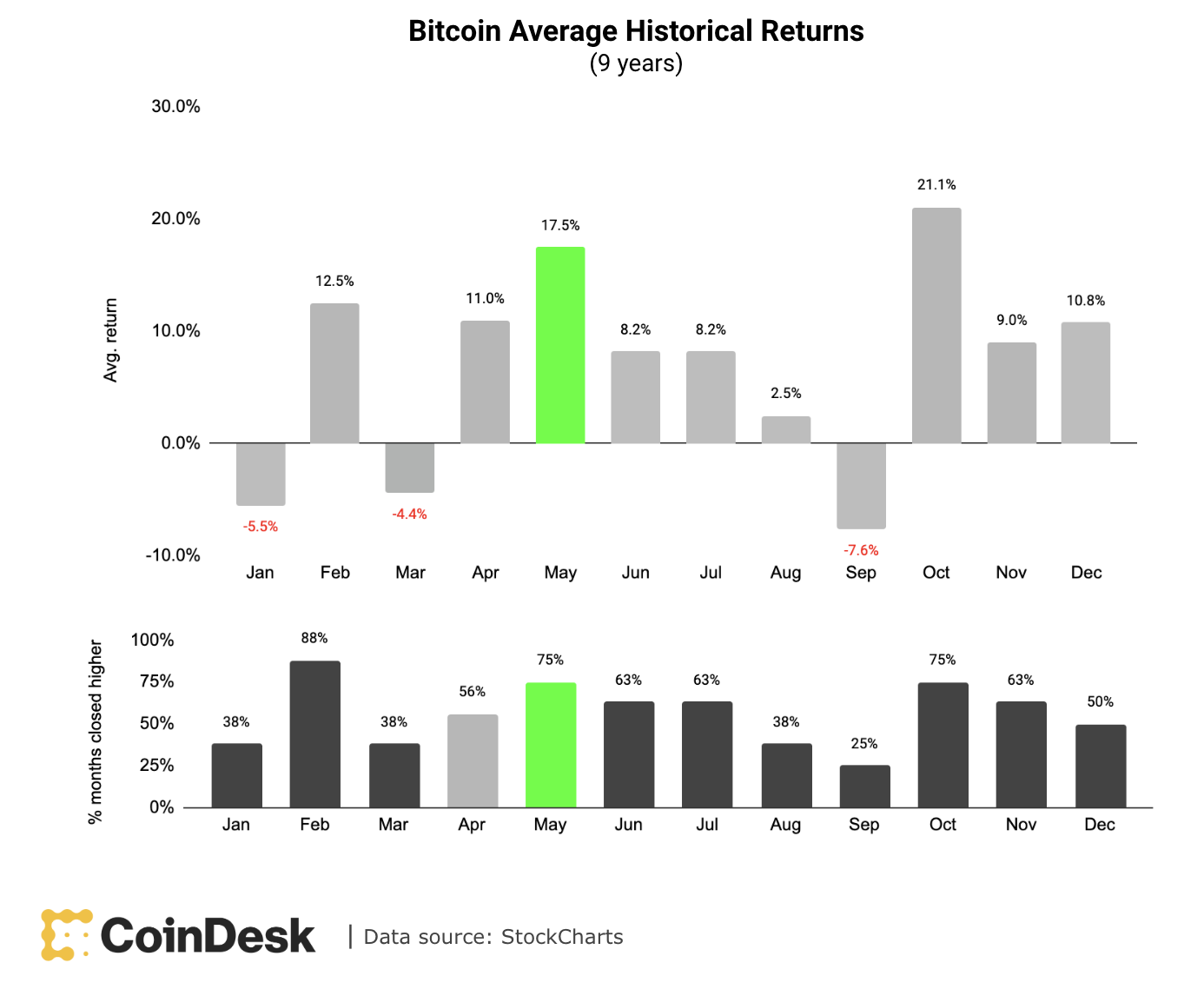