By The New Guards Media

Ukraine is being used as a proxy to attack Russia.
Everything the media spews out about the situation is propaganda.
Click Here To Play Video 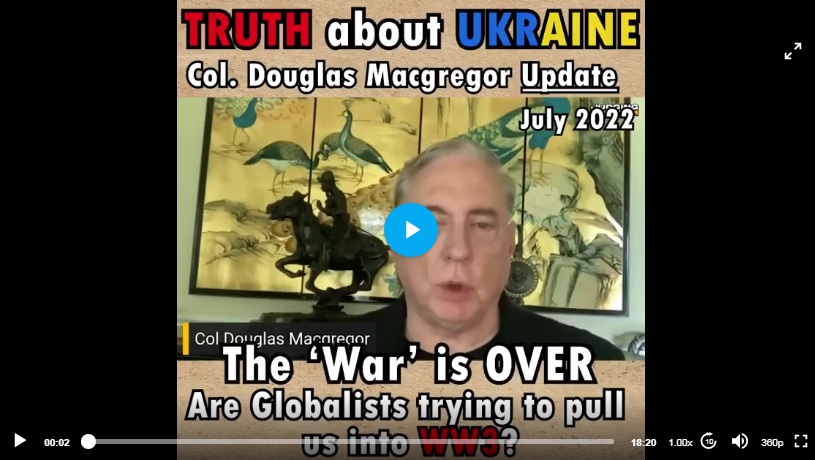 Graeme Derrick Westgarth
Well if this soldier knows this and the silent war in America why aren’t the military rising to distroy the evil dark swamp.

Clarc King
War is a looting operation, so is Covid, and the immigration invasion. Looting the US Treasury and the American people’s Main St. economy. Economic Hitmen are waiting for the right circumstances to deploy the Sack of the United States. Congress must retrieve the lost, unaccounted for, and Stolen $Trillions. Reorganize the Fed/Wall St. system, then fund and implement the new, nuclear, economy platform, the Redevelopment of North America that can beat back the Fed/Wall St. Greatest Depression upon us now. Millions of lives are at stake. We’re wasting time.

Simon Goma
That is total madness,there is no winner in a war,there are just shameless senseless losers brother!

Mirza Mshahrukh
Well men in black needed money by selling arms , like back in east and afg so this time they chose europe to profit from war, a small lobby controlling wars on globe

Jerry Scharoun
Who is this Moron and where does he get his facts! This sounds like Putinshit he must be fitting paid by Russians!

Arvis Vanags
Terrible b-s😚it. Nothing from Ukraine was never historically Russian. Russia is only a 30y old country whyle Ukraine is older than 1000y.

Ageirey Paul
Very sad, I said this long time ago ,this war could have been avoided if America wants, NATO is America and NATO in Eastern Europe means America in Eastern Europe and the world or America knows definitely well that, this is going to cause this, if America is in Russian shoes, America will do same and it’s obvious, zelensky should have taken into consideration the unnecessary lost of life and properties, at times you see some post and you ask your self why this?, Painful lost of lives especially children who are suppose to be protected by us at times you can’t get it, America acts as if Russian is Iraq, Afghanistan or the so called third world countries, Russian is a force to reckon with, the whole world is in crises b’cos of this avoidable war, Biden has let the world down. May GID give our leaders the wisdom to protect us.

Tim Monaro
McGregor you talk reality
There aint much of that left in this tin pot world of wannabes.

Troy Columbus
I am no general but I’ve been saying that very thing for a while now he’s absolutely right.

Carol Reid
Ukraine has been the evil centre for the Cabal for years. And if America joined the fight they would be fighting themselves. Putin is in there to Drain the swamp.
And they are Americans.
CIA ,FBI. NATO A Nazi regime that has been there since the last war.
Child trafficking ,far more lucrative than drugs.
And the CIA the biggest drug sellers in the world.
Let Putin get rid of them.
He rescued hundreds of children. At the beginning.
What happens to those children would actually blow your minds.
Putin is a good guy ,hates the Satanic Globalists. And wants the
Start if the New good world. We can have ,when they have fully drained the swamp. The quicker the better.

Artūrs Zakss
Every word you said was wrong and are lies. Either you are paid by Russia or you are ignorant.
Putin and Russia started this war, and yes they did have a choice, they could just not attack. But they did, using different excuses.
Everything Putin says is a lie, they say that there are nazies in Ukraine, but yet again they are the ones that invaded Ukraine killing and raping women and children.
There can’t be civilized conversation with Putin, because he lies in the face, and denies everything.
They said that Ukraine was going to attack Russia, but yet Russia attacked first and was gathering army long time before the attack.
And no, Ukraine is not lost the war nor loosing the war.
Speciallists say that approx. For every killed ukrainan soldier there are 5 or 6 killed russian soldiers. And Russia sucks with logistics, ukrainian forces are destroying their ammunition depos and a lot of tech. Russia starting to use old war tech from 70’s and even 60’s.
Russia has lost in 5 months more people than in war in afghanistan over 10 years.
Stop spreading lies! Russia is the one that is responssible for the war and all the atrocities.

George L. Fullerton
Blame Ukraine from A to z simply because they refuse to surrender for Russia to ruin them all ones right? Or is it wrong for Ukraine to defend Herself?
Anyway history never lost Russia sovereignty will understand the difference with the unborn kids.

Erwin Aya Paraja
Zelensky is used their own people Land to sacrifice just for trons politics and purpose they didn’t care about people died suffered from depression fear, zelensky is funny joker killer.

Jack Wilson
Actually, Zelensky is fighting for the USA and its allies … he’s not fighting for Ukraine … he doesn’t care about Ukraine and its people.

PrevPreviousTrump to File Major Lawsuit Against CNN
NextFirst Mover Asia: Bitcoin’s Recent Gains Have Been Small. What Will Drive Its Price Higher?Next