During a recent appearance on Glenn Beck’s show, former President Donald Trump spoke with Beck about the Durham probe and the traction being made in the investigation.

Show host Beck asked the former president whether be expected for “more things to come” from the Durham report, in which Trump stated that based upon what’s been accomplished thus far, he said he thinks “a lot of things are going to be happening” in the near future.

“Well, I think so. I mean, it looks like he set a foundation. And if you look at what he’s got, these are Hillary Clinton people, and he’s got a very strong foundation – and you look at that, and now you look at The Times – and I thought that was another terrible story, really terrible. They knew all about Hunter Biden – they said they misread it – they knew all about Hunter Biden…but we won it anyway, we got 75 million votes.

“We got more votes than any sitting president has ever gotten. That was more than I got the last time – we got 12 million more votes…I think a lot of things are going to be happening in the coming year. You are very lucky to be doing what you’re doing because your show is going to get very interesting.”

While on the program, Trump also brought up the fact that when he’d first introduced the concept of his campaign being spied on by the likes of Clinton, Obama, and the Democrats in general, the initial response was “all hell” breaking loose.

However, the former president pointed out that had he done anything close to what Clinton and others were engaged in – as in the spying of his campaign that the Durham report revealed this past February – then he would’ve likely been subjected to treatment on par with someone accused of “treason,” and could’ve even faced the “death penalty.”

“If this ever happened the opposite way, if I spied on Obama’s campaign or Hillary Clinton’s campaign, it would’ve been treason, it would have been everything right up until the death penalty – and that may have been included too. But it would’ve been over. It would have been the biggest thing ever. But it didn’t work that way. So we caught them – and we caught them cold – and we’ve just been building it up and building it up and watching – and frankly, we wish Bill Barr had the courage to do it, or do it also.” 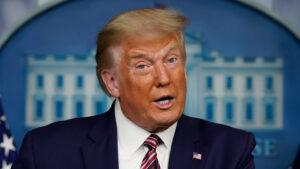