Let the WHO know how you feel about its attempted power grab—and take your own power back.

I’d like to thank James Roguski for alerting us all to this latest development from the WHO. In essence, this compromised, unelected and hubristic organisation is once again inviting video submissions from the public in response to the following question:

Based on your experience with the COVID-19 pandemic, what do you believe should be addressed at the international level to better protect against future pandemics?

Note that this question is predicated on the assumption that international action—by, let’s just say, for example, the WHO—is essential and also implies we have just been through a ‘pandemic’. Both of these points are questionable. That aside, it is important to view this consultation in the wider context of the WHO’s existing agenda, which is ostensibly a power grab enacted via a proposed pandemic agreement, and also via changes in the International Health Regulations (IHR).

I have written about this extensively here, but in essence, both the pandemic agreement and IHR amendments could give the WHO the authority to declare a pandemic whenever it sees fit—and then to enforce public health policies such as vaccines, lockdowns and mandates on member nations. This would override national constitutions, legislation and sovereignty, not to mention your inalienable rights.

Even if the WHO were a faultless centre of excellence free from conflicts of interest, this power grab would be deeply concerning. But the WHO’s function as a health authority has been sorely lacking. This is an organisation that suppressed inexpensive early treatments for Covid and promoted novel technology that had not been sufficiently tested. It has not conducted a safety audit of its own pharmacovigilance data which shows clear indications that these so-called vaccines cause immeasurable harm. It does not even seem to adhere to its own processes and policies anymore: in July, its Director-General Tedros Ghebreyesus overruled the majority vote of the WHO’s expert committee and declared the monkeypox outbreak a public health emergency of international concern. What other critical decisions might this non-medical professional overrule in the future?

Let’s consider what happened in the last public consultation back in April. If you remember, many of us dropped everything to submit our responses ahead of their very tight deadline. You can read about this here and here. At one point, the sheer volume of traffic as submissions poured in caused the WHO website to crash.

At that time, the WHO was also proposing thirteen amendments to the International Health Regulations that would fulfil the same aim. When the World Health Assembly finally convened in Geneva the week after the Better Way Conference in May, all but one of those amendments were withdrawn. How much influence did our collective pushback have on this outcome? We will never really know—but the mere possibility that our actions make a difference is reason enough to keep making our voices heard.

You can submit your video response from this Friday, 9 September up to Tuesday, 13 September here —and please note it must be no more than 90 seconds long.

James spoke about how best to do this and why it’s important at Monday’s General Assembly meeting, and you can watch his presentation here.

If you do decide to make your own video submission, you don’t need to just save it for the WHO: feel free to share it on social media with the hashtag #ExitTheWHO. 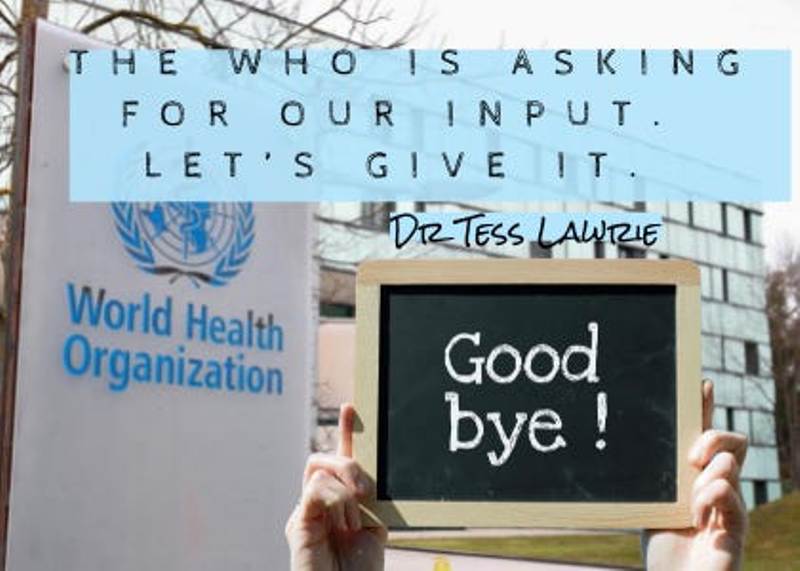 PrevPreviousIvermectin: The Truth
NextELENOVKA Penitentiary – The Ukrainian War Crime The West Wants Us To Forget AboutNext