‘The preliminary information indicates that unknown individuals detonated an explosive device at around 4 a.m. on Wednesday, July 6,” investigators said in a press release.

The mysterious Georgia Guidestones, also known as America’s Stonehenge, have been damaged in an explosion in the early hours of Wednesday.

The Georgia Bureau of Investigation (GBI) says it has opened a joint investigation with the Elbert County Sheriffs’ Office to investigate the explosion that destroyed one of the Guidestones near Elberton, GA.

“The preliminary information indicates that unknown individuals detonated an explosive device at around 4 a.m. on Wednesday, July 6,” the GBI said in a press release.

Authorities are investigating after an apparent explosion at the Georgia Guidestones, which sit on a site 7 miles north of Elberton on Georgia Highway 77 and are often referred to as an American Stonehenge. https://t.co/0IoelA1gQF pic.twitter.com/t0fA1QmG1c

The Georgia Guidestones have been the subject of numerous conspiracy theories since they were mysteriously erected in 1980.

The Guidestones contains a set of 10 guidelines in eight modern languages and four ancient languages. Conspiracy theorists maintain that the Guidestones serve as a set of guidelines for the New World Order, which calls for the decimation of the human species due to its first commandment which reads:

Maintain humanity under 500,000,000 in perpetual balance of nature.

Observers have pointed that the demand for the human population is in line with Malthusian beliefs shared by many of the world’s elites, including Microsoft founder Bill Gates, who have expressed their belief that the world is in danger of suffering from a shortage of resources due to overpopulation. 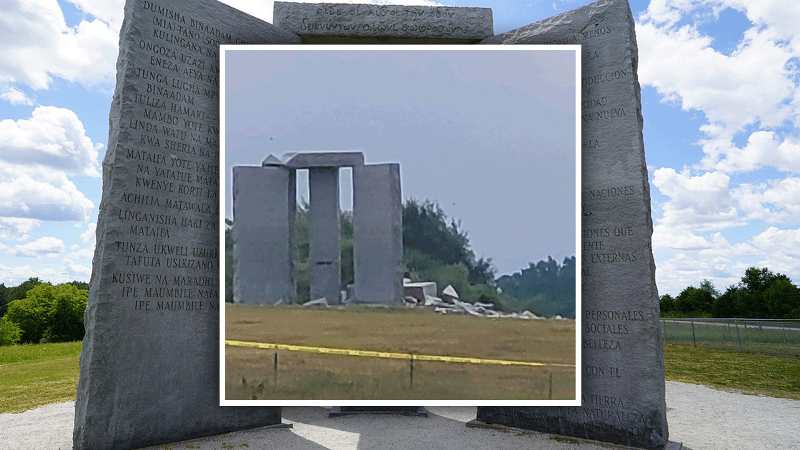