Ashli Babbitt, the 35-year-old Air Force veteran shot outside the U.S. Capitol Speaker’s Lobby by Capitol Police Lt. Michael Byrd on January 6, 2021, was “murdered … under the color of authority,” a use-of-force expert concludes after reviewing video footage of the incident.

Just prior to 2:45 p.m. on January 6, Ashli Babbitt began climbing through the side window leading into the Speaker’s Lobby and was shot in the left anterior shoulder by Byrd. She was pronounced dead a half-hour later at MedStar Washington Hospital Center.

Stan Kephart, who has testified in court more than 350 times as an expert witness on policing issues, reviewed the shooting in the new Epoch TV documentary, “The Real Story of Jan. 6.” The film is streaming on Epoch TV.

Kephart is a 42-year law enforcement veteran and former director of security for the 1984 Los Angeles Summer Olympics. He has testified on topics including excessive force, police discipline, officer safety, and crowd control.

“My conclusion … based on what I saw and observed in the video clips is that Ashli Babbitt was murdered,” Kephart said.

“She was shot and killed under color of authority by an officer who violated not only the law but his oath and committed an arrestable offense,” Kephart said. 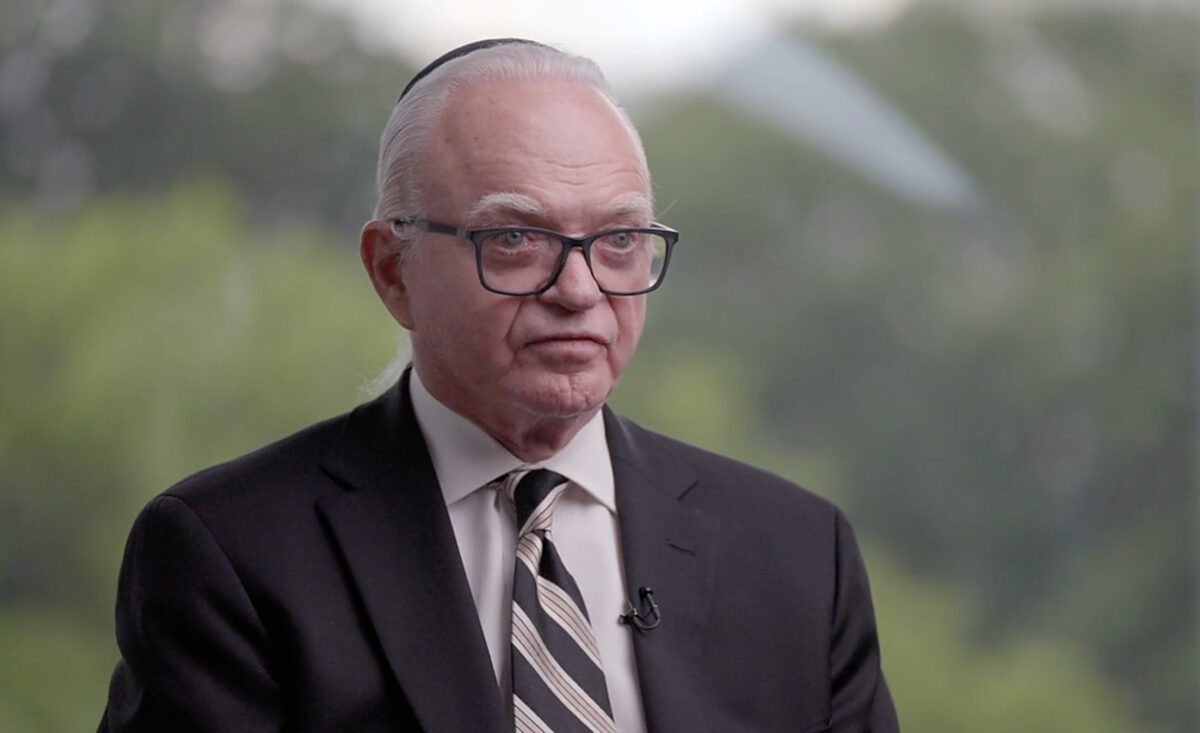 Police use-of-force expert Stan Kephart is interviewed for the Epoch TV documentary, “The Real Story of Jan. 6” on June 2, 2022.

Kephart said he saw nothing in the video evidence to indicate Byrd should have felt his life was in danger or that he was at risk of serious harm from the 5-foot 2-inch, 110-pound San Diego woman wrapped in a Trump flag.

“In order for lethal force to be authorized, the officer has to be able to articulate that he or she was in fear of losing his life, was about to be killed, or grievously injured,” Kephart said in the documentary. “There is nothing I saw in that film that would indicate that was possible or probable from what unfolded.”

Byrd’s attorney, Mark Schamel, in a statement to The Epoch Times called Kephart’s conclusion “unsupported and erroneous,” saying the Lieutenant was justified in the use of force.

“When Ms. Babbitt entered through the broken window and entered the inner protected area, wearing a backpack and refusing the verbal commands of multiple armed federal officers with weapons drawn, the threat she posed was clear and Lt. Byrd, as the first officer in the final line of defense, was absolutely justified in his use of force.” 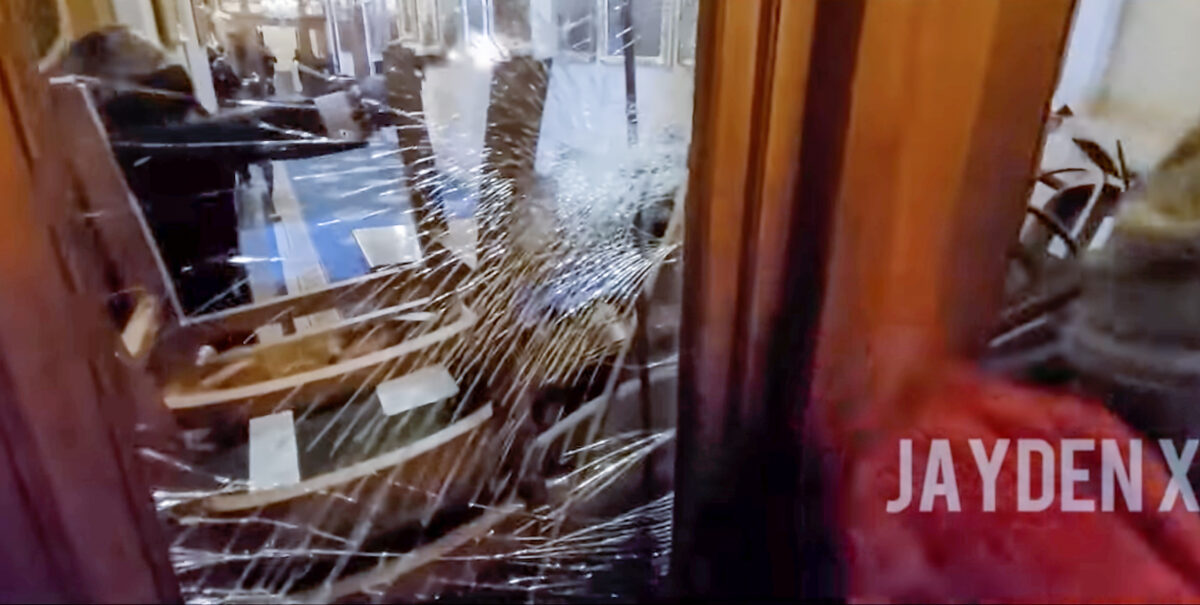 “I loved hearing that from him. He’s obviously well-versed in the use of force,” Babbitt told The Epoch Times, referring to Kephart. “He’s clearly a very smart man who has been in that business for a long time. He should be listened to.” 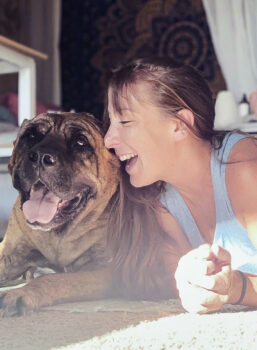 Ashli Babbitt with Bella, one of her treasured dogs, at home in San Diego. (Courtesy of Aaron Babbitt)

Babbitt disputed Schamel’s claim that his wife “refused” verbal commands from Byrd or anyone else. He questioned why Byrd was wearing a COVID face covering if he hoped to be heard shouting instructions.

“Witness testimony I’ve read, police included, said they heard no warning,” Babbitt said, adding that if they thought the situation was serious enough for deadly force, “the mask should probably come off your face. Complete disregard for human life and not following the use-of-force continuum.”

Video shot by political activist John “Jayden X” Sullivan through the Speaker’s Lobby windows shows Byrd had his finger on the trigger of his Glock pistol before Babbitt ever appeared in the window. He then removed his finger from the trigger for a short time before advancing on the open window and firing as Babbitt started to lean through.

Babbitt’s killing still hangs like a dark cloud over January 6. Questions remain about her death, even after the June 2022 release of a U.S. Department of Justice (DOJ) report that concluded there was insufficient evidence that Byrd used excessive force when he shot the unarmed Babbitt as she attempted to climb through a broken window.

Kephart said Byrd should have written a firearms discharge report immediately after the shooting. Byrd declined to give a statement to Internal Affairs detectives and was never formally interviewed before eventually being cleared of wrongdoing.

According to a June 2022 DOJ report, Byrd agreed to a “voluntary debrief and walk-through of the scene” with his attorney in late January 2021, in which he stated if the “mob of rioters” outside the Speaker’s Lobby gained entry, “it wasn’t going to go well.”

In a 2021 interview with Lester Holt on NBC, Byrd said he could not see into the Speaker’s Lobby hallway through the glass, did not know if the person climbing into the window was male or female, and could not tell if the person had anything in their hands.

“It’s impossible for me to see what’s on the other side because we had created such a barricade, and it was high enough that the visibility was impossible,” Byrd said. He said he did not know there were three Capitol Police officers standing with their backs to the entry doors. 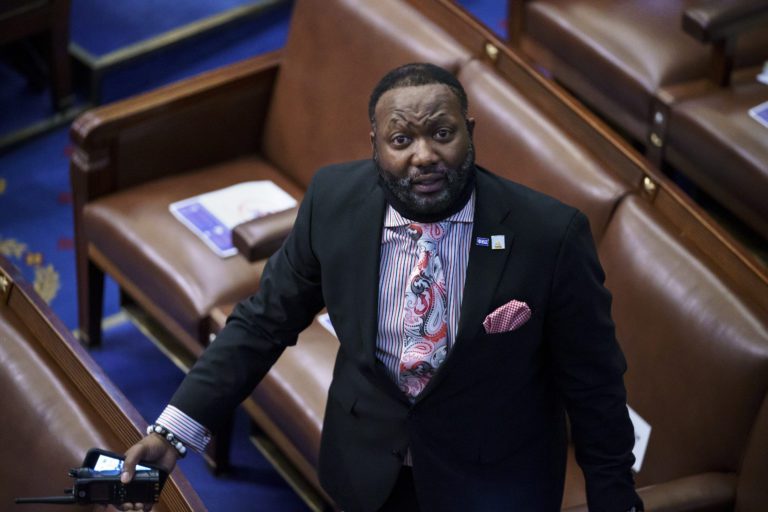 Byrd said police “were essentially trapped” in the lobby, and “there was nowhere to retreat” because entrances were barricaded. “It sounded like hundreds of people outside of that door,” he said. Byrd said he repeatedly shouted for people to get back—”I was yelling at the top of my lungs”—but added it was possible that could not be heard in the hallway.

When Holt asked Byrd if he knew whom he shot, Byrd replied: “I had no clue. I didn’t even know it was a female until hours way later, sometime later on that night.” He said he only found out later that Babbitt had no weapon. “There was no way to know that at that time,” he said. “I could not fully see her hands or what was in the backpack or what the intentions of…”

“I know based on my training and my policy, what I did was appropriate,” Byrd said.

Kephart said the shooting should have been evaluated using a litmus test from the 1989 U.S. Supreme Court case Graham v. Connor: whether force was ever needed and appropriate in the situation, the extent of the injury, and “whether the force was applied in a good-faith manner to maintain and restore discipline, or maliciously and sadistically.”

The DOJ report on the shooting was released in June by Judicial Watch, which sued the DOJ for January 6 case records.

“After a thorough review of the facts and circumstances in this case, there is insufficient evidence to prove beyond a reasonable doubt that Lt. Byrd violated Ms. McEntee’s (sic) civil rights by willfully using more force than was reasonably necessary, or was not acting in self-defense or the defense of others,” reads the undated 14-page document. The report referred to Babbitt by her previous married name. She married Aaron Babbitt in 2019.

Kephart said the standard set by the Supreme Court in Graham v. Connor does not refer to “willfully” using more force than necessary. “…They inserted willfully above knowingly, which is at best contradictory, and worst, disingenuous,” Kephart told The Epoch Times in an email.

Although Byrd refused to give a formal statement to investigators, the DOJ concluded that his apparent belief that Babbitt posed an imminent, potentially deadly threat was “reasonable.” 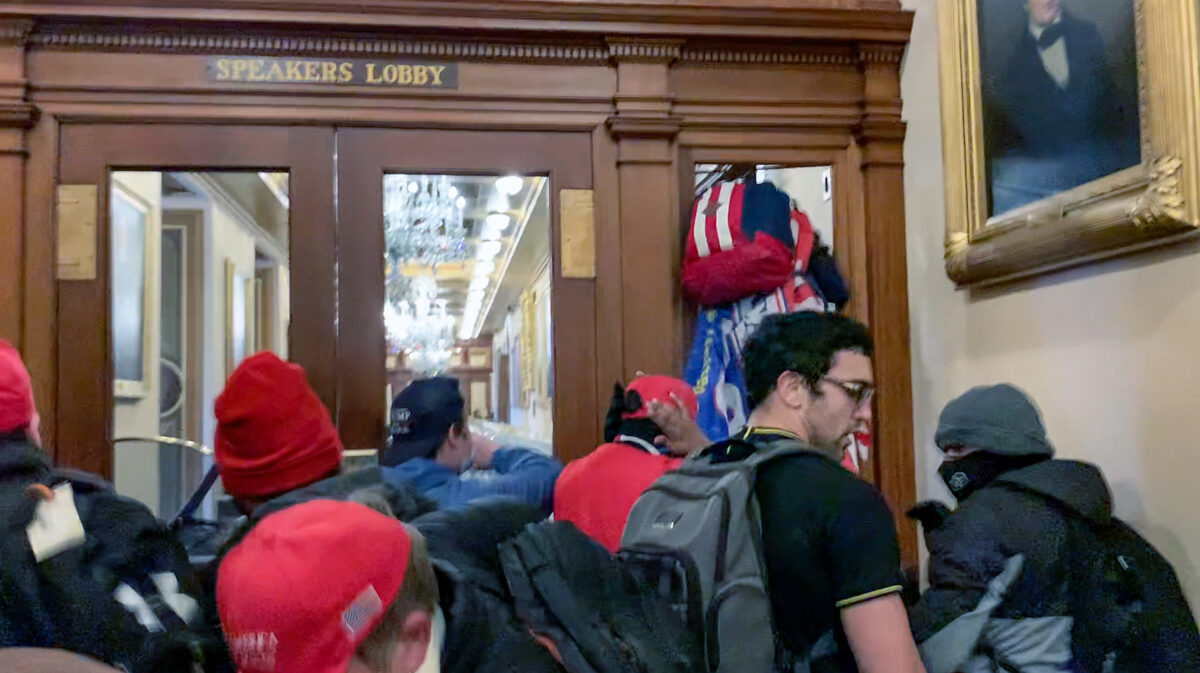 Ashli Babbitt (upper right) begins to fall back after being shot by Capitol Police Lt. Michael Byrd on January 6, 2021.

About five hours after the shooting, Byrd met with Internal Affairs detectives from the D.C. Metropolitan Police Department, which investigated the shooting on behalf of the U.S. Capitol Police. He said he wanted to consult an attorney first. Byrd never made a formal statement to Internal Affairs investigators.

In his statement to The Epoch Times, Schamel, Byrd’s attorney, said “actual experts who train federal agents and officers in the use of force have described Lt. Byrd’s conduct as exemplary.”

A Metropolitan Police Department Internal Affairs investigator who reviewed video footage from Capitol security cameras from just before Babbitt was shot reported, “Ms. Babbitt does not appear to be carrying anything in her hands,” according to an internal police report released by Judicial Watch.

One U.S. Capitol Police sergeant who was in the Speaker’s Lobby when Babbitt was shot told Internal Affairs investigators at the time of the shooting “there was a lot of screaming” and “I heard somebody screaming, ‘Get back, get back,’ ” an Internal Affairs report said.

A Capitol Police officer who was in the Speaker’s Lobby with Byrd said before Babbitt appeared in the window, various officers were shouting for the crowd to get back. After Byrd fired his weapon, the officer said, Byrd was “shaky” and “teary eyed.”

“You know, you can just tell, like, I ain’t gonna say when somebody regrets to do something, when somebody just is just nervous, you know, they’ll rub their head, their (sic) pace back and forth,” the officer told an Internal Affairs agent.

One of the three officers stationed on the outside of the Speaker’s Lobby doors where Ashli Babbitt and other protesters were gathered told an investigator “he did not recall hearing any verbal commands being given from inside the Speaker’s Lobby,” according to a Jan. 6 police report.

One of the other two officers stationed outside the doors and facing the angry crowd was asked if he heard anyone inside the Speaker’s Lobby saying anything. “No, sir,” he replied. When asked if he considered using his firearm on rioters, he said: “So, you’re accountable for every round in, in your service weapon, obviously, you can’t shoot into an empty crowd. That’s so wrong.”

The third officer stationed at the doors also told investigators he didn’t hear any communications from police inside the Speaker’s Lobby, according to a Jan. 6, 2021, Internal Affairs report. 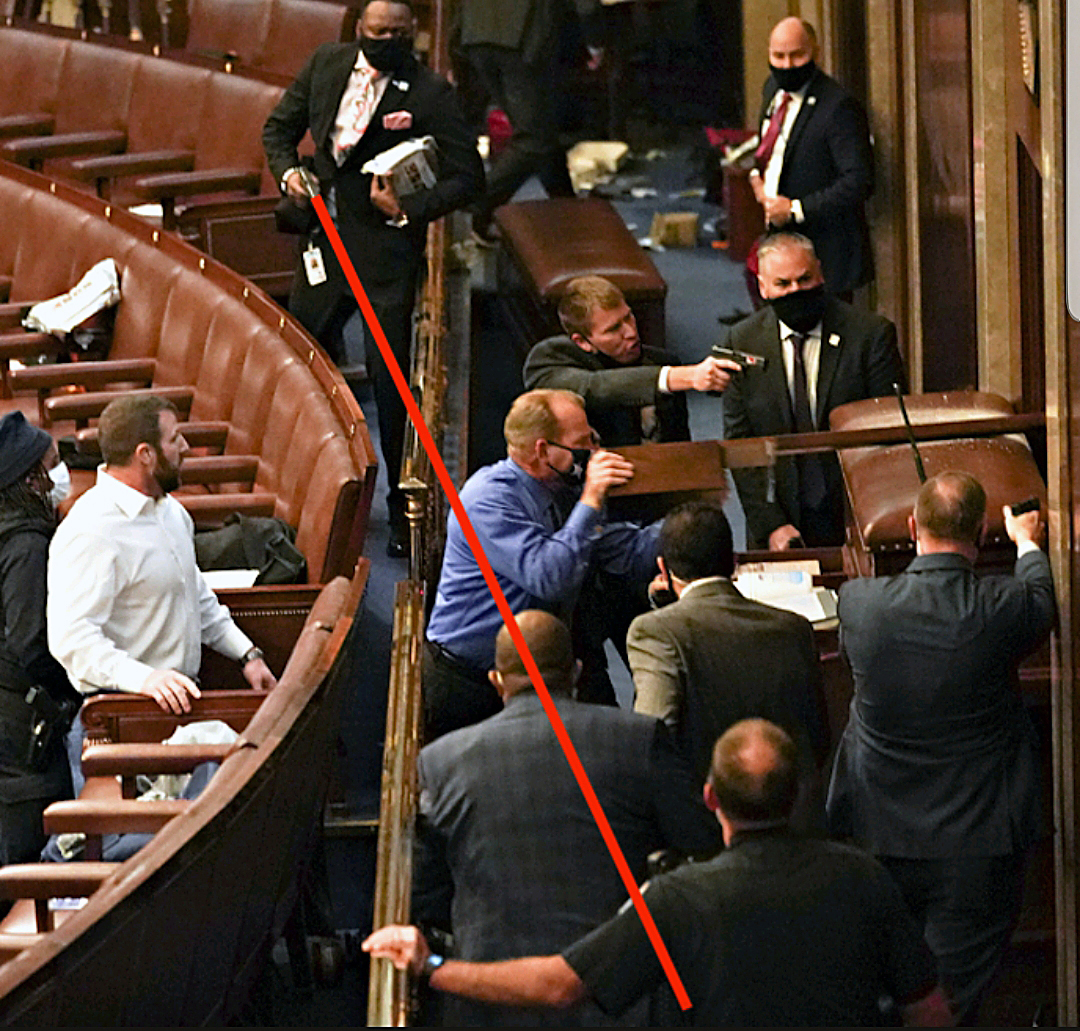 Capitol Police Lt. Michael Byrd had his Glock pistol drawn and pointed in the direction of U.S. Rep Troy Nehls (R-Texas) on January 6, 2021.

A Metropolitan Police Department Internal Affairs Division summary from Babbitt’s Jan. 7 autopsy said the medical examiner determined “the cause of death was a gunshot wound to the left anterior shoulder and the manner of death was ruled a homicide.”

Kephart said he was shocked at a photograph from the House floor earlier on January 6 showing Byrd with his gun drawn and aimed in the direction of Rep. Troy Nehls (R-Texas) and two other men.

“This man [Byrd] should be directed to submit to a fitness-for-duty examination immediately by his chief of police,” Kephart said. “Based on this photo alone he is not qualified to possess a firearm. He is clearly demonstrating a conscious disregard for where he is. His firearm should be at a ‘low ready’ position until target acquisition.

“Any qualified firearms instructor would be horrified at this photo in view of what transpired after the picture was taken, where he shot and killed Ashli Babbitt, disregarding officers in the backdrop, and did not advance and assess the shot or provide first aid and take control of the crime scene—all of which he has been taught, trained, and certified to do.”

Nehls has spoken repeatedly of his belief that the shooting was murder. Nehls served as sheriff of Fort Bend County, Texas, from 2012 until 2020. “The video was quite clear,” Nehls told Newsmax in 2021. “It was murder.” 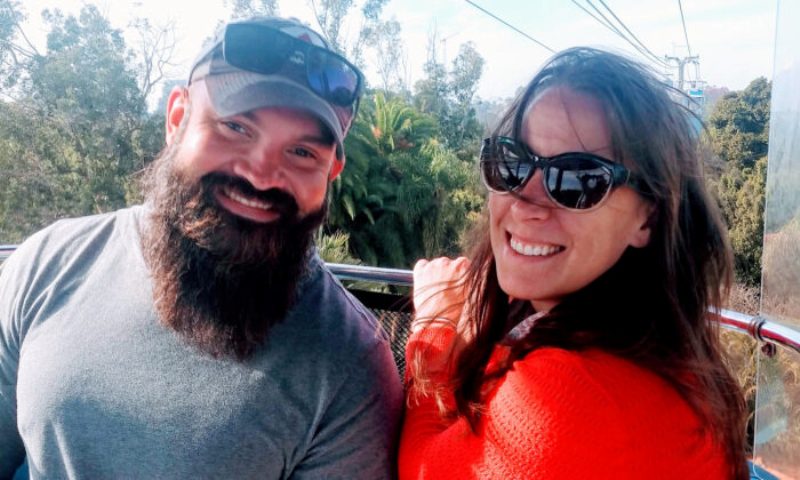 PrevPreviousDr. Dolores Cahill – A Vaxxinated Person Will Die in 3 to 5 Years Even With a Single Injection
NextMonkeypox Also Know as “Autoimmune Blistering Disease” Is One of the Pfizer’s Long List of C0vid Vaxxine Side EffectsNext