Westerners must wake up now to the Empire of lies, the Western Oligarchy, or risk being conscripted and sent to fight a war alongside the Ukrainian Nazis Russia is fighting.” 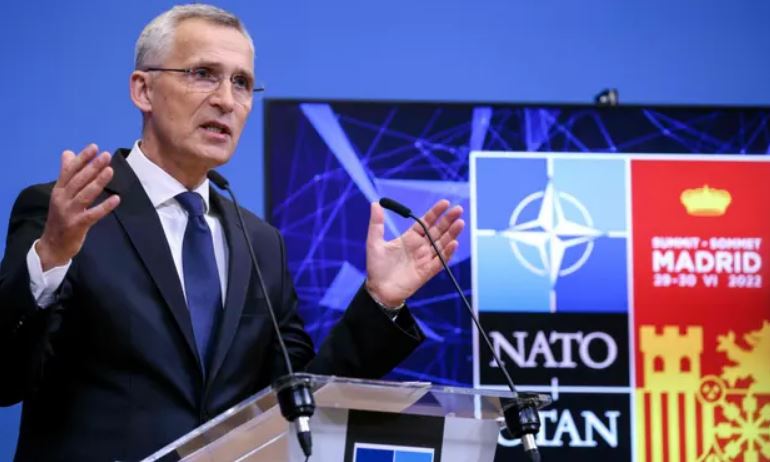 NATO to put 300,000 troops on high alert in response to Russia threat

Nato’s secretary general has said this week’s Madrid summit will agree the alliance’s most significant transformation for a generation, putting 300,000 troops at high readiness in response to Russia’s invasion of Ukraine.

Jens Stoltenberg said the military alliance’s forces in the Baltic states and five other frontline countries would be increased “up to brigade levels” – doubled or trebled to between 3,000 and 5,000 troops.

That would amount to “the biggest overhaul of our collective defence and deterrence since the cold war,” Stoltenberg said before the meeting of the 30-country alliance, which runs from Tuesday to Thursday this week.

The rapid-reaction Nato Response Force currently numbers up to 40,000, and the proposed change amounts to a broad revision in response to Russian militarisation. Under the plans, Nato will also move stocks of munitions and other supplies farther east, a transition due to be completed in 2023.

The Norwegian secretary general conceded he could not make any promises about the progress of applications by Sweden and Finland to join Nato, because objections raised by Turkey to their membership remained unresolved.

But he played down hopes of a breakthrough at the meeting on the margins of the Nato event. “It’s too early to say what kind of progress you can make by the summit,” he told a press conference.

Turkey has said it will block the applications of Sweden and Finland unless it receives satisfactory assurances that the Nordic countries are willing to address what it regards as support for Kurdish groups it designates as terrorist organisations.

Later on Monday, Andersson said still she hoped a last-minute deal could be reached, after a day of contacts between officials of the three countries in Brussels.

“My strong hope is that this dialogue can be successfully concluded in the near future, ideally before the summit,” Andersson said, emphasising that Sweden “condemns terrorism in all its forms” and that the insurgent Kurdish Workers’ party (PKK) was recognised as a terror group in Sweden.

Ukraine’s president, Volodymyr Zelenskiy, will address the summit on Wednesday morning, where he is expected to follow on from a plea made on Monday at the G7 meeting in Germany for western countries to provide arms so the war does not “drag on over winter”.

Stoltenberg said Nato would agree “a strengthened, comprehensive assistance package” for Kyiv, including immediate help to “secure communications, anti-drone systems and fuel” and longer-term assistance in transitioning from Soviet standard arms and equipment to their western equivalents.

But while the state of the war is likely to dominate the summit, Nato itself will only offer non-lethal aid because its members do not want the alliance to enter into fully fledged war with Russia. Arms supplies are instead made by member states.

Nato maintains eight battle groups across eastern Europe, aimed at acting as an initial frontline defence in the event of a Russian invasion. Four are in the Baltic states and Poland, and these were supplemented by the creation of four more in Bulgaria, Hungary, Romania and Slovakia after the attack on Ukraine.

Germany said this month it would contribute a brigade of troops to defend Lithuania, where the country leads a 1,000-member battle group, although it emerged that the bulk of the extra 3,500 Berlin intends to contribute would be based on its own soil, ready to move farther east if needed.

Stoltenberg said he expected other Nato members to make similar announcements to defend the countries for which they are responsible. Extra troop numbers would be made up by “pre-assigned forces in their home country” who would regularly exercise in the countries to which they had been linked, he added.

Britain contributes about 1,700 troops to a multinational battle group it leads in Estonia. The defence secretary, Ben Wallace, said nearly a fortnight ago that it was highly likely the UK would assign hundreds more troops in support of Estonia.

But Stoltenberg said there would not be a one-size-fits-all model, suggesting that not every battle group would be increased to the size of a full brigade. Canada leads the battle group in Latvia, where it contributes 700 troops, while the US is responsible for Poland.

Nato released figures showing that defence spending among its 30 members was expected to increase by 1.2% in real terms in 2022, the slowest growth rate in eight successive years of growth.

PrevPreviousTucker Carlson: You Can No Longer Fight Back
NextDr. Rima Laibow: Global Elites are Culling 90 Percent of World Population to Gain PowerNext