Americans are being shepherded to the next emoji crusade – the latest being Russia’s special operation in Ukraine – like consumers waiting in line for junk food and Happy Meals. When does the mindless virtue-signaling end?

While some Westerners may find a kindred spirit with McDonald’s and its anti-war posturing against Russia, a little more consistency on the issue of war and peace would be a most welcome development.

The fact is, nothing screams ‘Russophobia’ more than the spectacle of McDonald’s abandoning the Russian market amid Moscow’s conflict with Ukraine, especially when it is remembered that Ronald kept flipping his burgers all the while as George W. Bush and Barack Obama were indulging themselves on a killing spree in numerous ill-fated countries.

Aside from the question of America’s flagrant double standards when dealing with Russia, there lurks an even more mysterious and disturbing riddle: How is it possible to continue triggering Americans into a non-stop virtue-signaling crusade on behalf of various causes? Moreover, if the media was not there to point them to the Next Big Thing, would Americans even know that one existed?

With whiplash swiftness, Americans have gone from taking a knee to Black Lives Matter (even as this group was going on a billion-dollar, 20-state rampage, which entered the record books as America’s most expensive protest ever), to demonizing those wary of new Covid-19 vaccines, to lining up on opposite sides of the Roe v. Wade abortion rights showdown.

Amid these increasingly frequent domestic earthquakes, Russia has always found itself at the epicenter of the action. It’s a bit like the Chris Rock of countries, getting slapped in the face every day without rhyme or reason. There is a whiff of a slick McDonald’s advertising campaign at the heart of America’s perennial obsession with Russia. Just like those wonderfully deceptive TV ads that show a deliriously happy (and mysteriously healthy) family gorging themselves on Big Macs and Happy Meals, a trip to McDonald’s tends to always leave behind a bitter aftertaste, if not outright intestinal issues. In other words, the corporate hype rarely lives up to the reality.

A similar sort of advertising campaign has been aimed directly at Russia for many years, albeit in reverse. Not unlike Edward Bernays, the ‘father of public relations’, and his ability to convince American women in the 1920s that smoking cigarettes was a symbol of feminine empowerment, propagandists today have successfully peddled the fake news to an unsuspecting public that Russia is the root of all evil.

Unless people ditch these carefully crafted stereotypes and physically board an airplane, they will probably never know that Russia’s portrayal by Hollywood and the mainstream media is quite simply the worst form of propaganda. Once an individual experiences the reality of Russia without the second-hand smoke and mirrors – as millions of sports fans did during the 2018 FIFA World Cup, for example, where dozens of football matches were held in 11 Russian cities – they quickly understand that the doom and gloom stories about this part of the world are a wicked pack of lies.

But alas, not everyone in the world can travel to Russia and see the reality for themselves. Unfriendly foreign countries, in cahoots with a venal media, perfectly understand this handicap, which allows them to portray Russia as the ‘evil empire’, something straight out of a Bond flick. And then one day, when Russia finds itself in a situation where it is forced to say ‘enough!’ and resorts to what it considers to be a legitimate act of self-defense – certainly no less legitimate than the military offensives undertaken by the Western hemisphere over the years – a vicious virtue-signaling campaign against Russia and Russians begins in earnest, and to great effect.

The reaction to the events in Ukraine has demonstrated the concentrated power of the US media and government to channel the self-perceived virtuousness of the entire Western world practically at will. The US establishment could just as easily have weaponized a virtuous campaign on behalf of other embattled people, like in Yemen, for example, which has been under relentless siege for seven years by Saudi Arabia, with the assistance from the usual (Western) suspects. According to UNICEF, the humanitarian agency for children, “more than 10,200 children have been killed or injured” since the start of Riyadh’s military blockade, which has led to disease, famine, and death throughout the country.

And what about the long-suffering people of Donbass, the Russian-speaking region of Ukraine that has been under siege by pro-Kiev forces for eight years? How many Americans know that this tragedy can be traced back to a US-led coup that ousted Ukraine’s democratically elected government in 2014? Had the virtue-signaling crusaders shone the spotlight on the plight of these oppressed peoples, asking why the Minsk Protocol for a ceasefire was being regularly violated, there very well could be peace in Ukraine today.

Self-serving companies like McDonald’s and countries like the United States shout from the rooftops that they are the ultimate defenders of the oppressed. The reality, however, is more sobering. The reality is that their virtue-signaling theatrics are of a very selective type that has a strong tendency for aligning with the foreign policy dictates of Washington, as opposed to the actual needs of the downtrodden. Virtuosity should know no political master, otherwise it’s just cheap virtue-signaling on behalf of ulterior motives. 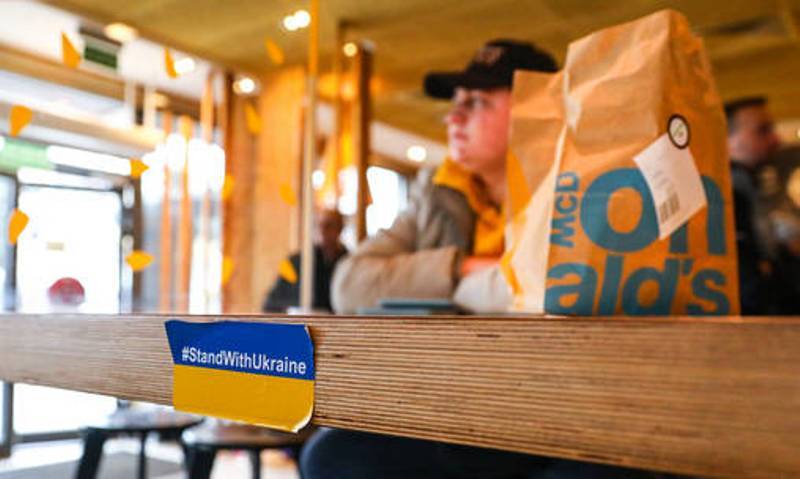 PrevPreviousWow You Guys Its Worse Than I Thought… Finally Got My Hands on an English Translated Version of the Full Brief From Russian Military, Shout Out to Yeeun Min
NextCanada Jab Injuries – Taylor – From Toronto, CanadaNext