The “American Dream” of homeownership is already out of reach of most Americans, thanks to the 50% increase in home prices over the last couple of years. Homeowners who’ve purchased since the beginning of the most recent housing bubble are already regretting their decision, based on the chaos in the housing market.

Why does this matter?

It’s hard to overstate the importance of housing in the U.S. economy. For nearly every American family, their home is their single biggest asset.

Now, we don’t generally think of our homes as an “asset” because we live in them. We usually think of them as a necessity that happens to have a market value.

However, most American families actually do treat their homes as financial assets. For example:

Even folks who’d never consider investing in financial markets own homes. About 54% of Americans own stocks – compared to 63% who own real estate.

Well, this makes sense, right? After all, housing is “safer” than volatile financial markets.

Not at the moment. Here’s why…

How the war on inflation is crushing the housing market

Over the past 12 months, we’ve seen the Federal Reserve reluctantly raise interest rates from virtually nothing (0.08% average) to 3.75-4%. In addition, the Fed has begun to contract the nation’s money supply.

These are the opening salvos in the Fed’s war on inflation. Which is good news! We waited long enough, and 40-year record-high inflation must be eradicated.

Unfortunately, there’s a notable side effect from the Fed’s actions.

Since the inflation of prices for goods and services (like food, fuel and everything else we buy) and inflation of asset prices (like housing, stocks and bonds) come from the same source, the Fed can’t crush inflation without also crushing asset prices.

That means people who believe their families are insulated from stock market chaos may actually have more at risk than they believe.

Here’s what we’ve seen so far:

If you buy a home right now, higher mortgage rates mean you’ll pay as much as 50% more monthly than a year ago.

Take a look at how many home prices have grown over the last decade, compared to the rise in average household income: 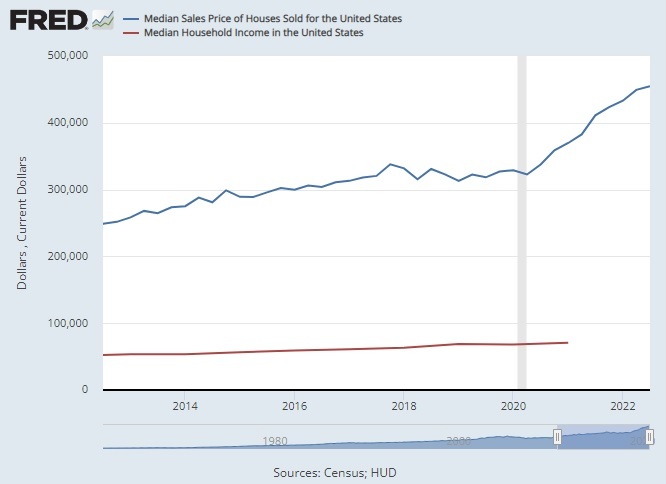 If you’re having trouble seeing any increase in household income over the last ten years, well, that’s because incomes have grown only half as rapidly as home prices.

Today, homes in the U.S. are less affordable than at any time in history (not even at the peak of the 2008 housing bubble).

Adjustable-rate mortgages (ARMs) offer a temporary fixed-rate period, usually five years, followed by an “adjustment” to market rates. Considering that the Fed’s interest rate hikes are likely to hang around for the next few years, that adjustment is all to likely to come as an unpleasant surprise…

In other words, buying or selling a home has gotten much, much harder.

In times like these, it’s probably a good idea to rethink any plans that rely on using your home as an asset.

That’s where things are now.

Where are they going? The prognosis doesn’t look good.

Why the housing market is about to get even worse

You cannot have both interest rates and housing prices making new highs. Something’s got to give.

It’s not just something, though – many things are starting to fall apart.

In an article describing the “annihilation” of “AI-powered home flipper” Opendoor, Wolf Richter explained why the company was no match for today’s housing market:

In other words, the company realizes that it will make a massive loss selling those homes because prices have dropped while it owned the homes…

It’s much easier to profit from home prices or any other asset when cheap credit and easy money are prevalent. Richter says this heady combination was “turning investors’ brains to mush,” and that’s as good a description of peak-of-the-bubble manic investing behavior as I’ve ever read.

Just like always, those who made long-term financial decisions at the peak of the bubble, assuming the good times would last forever, already regret their mistakes.

Derek Thompson took to the pages of The Atlantic to try to drive home just how much things have changed, just how quickly:

Just 20 months ago, the average fixed rate for a 30-year mortgage was lower than at any time on record; today, it’s higher than in any other month this century. “You’d be kind of crazy to sell your house right now unless you have to,” financial commentator Joe Weisenthal said.

He finished the article with two chilling sentences: “I’m not a believer in curses. But if anything is cursed in this world, it’s the 21st-century American housing market.”

According to Wharton professor Jeremy Seigel, the housing market is staring down the barrel of an outright catastrophe:

I think we’re gonna have the second-biggest housing price decline since the post WWII period over the next 12 months. That’s a very, very significant factor for wealth [and] for equity in the housing market.

At least Seigel didn’t use the word “cursed.”

Here’s what this means for us:

That may be quite a blow. I hope not! I don’t write these articles to depress or frighten you – rather I want to give you a direct, easy-to-understand warning of what lies ahead.

So you can plan accordingly.

The good news is, you still have options.

We’ve seen that “safe as houses,” in this market, seems far from safe.

That means right now is a suitable time to reevaluate your savings and your exposure to risk. Excessive risk means you’re taking a big gamble, with the potential for high rewards and the certainty of high risks. How much has your home factored into your financial plans? Is it time to rely on a safer safe haven asset instead?

Ask yourself: “Is my personal risk exposure in line with my goals?”

Are your savings diversified among a variety of assets, or are all your eggs in one basket?

If you need more certainty in your financial future, consider physical precious metals like gold and silver. Not only do they add a level of diversification to your savings, both gold and silver have been considered “safe haven” assets for centuries.

Maybe just ask yourself: would you sleep better at night with “portfolio insurance” to balance risky investments?

If the answer is yes, Birch Gold can help. 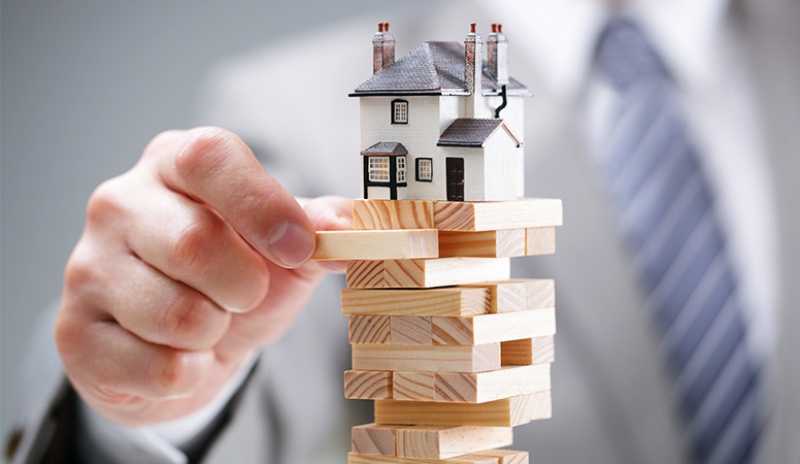