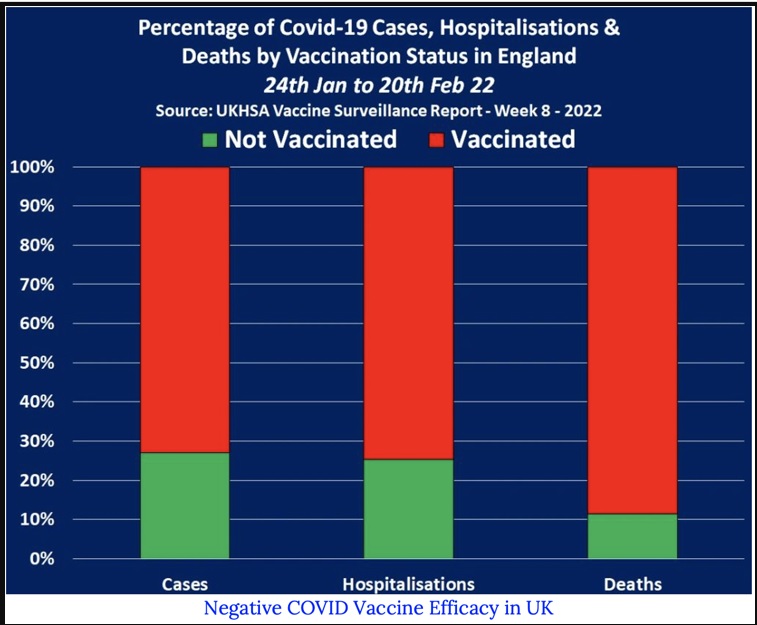 In the real world, whenever we see the phrase Negative Efficacy associated with an experimental drug, it usually means the chance of death, infection, or serious disease is higher with the drug than without, and the term Negative Efficacy is used.

If one were testing a new pill to treat brain cancer, and more of the patients died who received the drug, two things should occur; one, the medication would have a Negative Efficacy, and two, it should not be approved.

Negative Efficacy is often associated with increased all-cause mortality. That means more people die in the drug-taking group, whether due to brain cancer or other reasons. So no one would want to be part of that group.

Based upon the weekly reports published by the UKHSA for Week 11, 2022, vaccine effectiveness against Omicron in the 60 to 69 age group reached nearly NEGATIVE 300% meaning it was almost four times more likely for a triple-vaxxed person to get infected compared to an unvaxxed.

UKHSA announced that as of April 1, 2022, they would stop testing and keeping track of these numbers that apparently do no one any good, especially those who have been vaccinated and the vaccine manufacturers. It causes worry in the vaccinated, and it contradicts what we have all been told, that the vaccine is effective.

What’s worse is that hospitalizations and deaths also show a similar Negative Efficacy with more death and severe disease among the vaccinated, the opposite of the expected effect.

In his recent Substack, he noted, “In plain language, taking the vaccine escalates your risk of getting infected –Negative Efficacy. This is bad as the evidence is clear that these vaccines are non-sterilizing in that they do not stop infection, transmission, death, or hospitalization. IMO, they never ever worked. I will debate anyone on this.”

Dr. Alexander discusses another example of Negative Vaccine Efficacy with the Dengue Vaccine that killed many children in the Philippines in 2017. Like the COVID-19 shots, this vaccine should never have been used. Since Dr. Alexander has spoken out, what has been the response of those in the vaccine industry?

Alexander reports they contacted him. He was offered $1 million and $50,000 a month if he would stop writing pieces that were critical of Pfizer’s vaccine and CEO, Albert Bourla.

Dr. Alexander – not so politely – declined.

Edward Dowd has captured the crest of this wave of death sweeping around the globe. He has evidence that fraud occurred with the manufacturers knowingly concealing their knowledge of Negative Efficacy in their internal data that has been hidden from the public and is only now coming to light.

But the excess deaths are showing up in almost all age cohorts and cannot be explained away by other causes. Dowd refers to this as the ‘greatest fraud’ in modern history.

When one realizes the implications of Negative Vaccine Efficacy and the ensuing increase in deaths, manifesting as ‘excess deaths, ‘ one cannot escape the sheer numbers we may witness in the coming months and years. For example, consider that 11.2 billion doses of COVID-19 vaccines have been administered.

Then, realize that 4.52 billion souls are fully vaccinated, representing 57.9% of the Earth’s population – according to the latest figures. If you factor in that excess deaths from Negative Vaccine Efficacy are running at 40% ABOVE the expected numbers, we are looking at massive increases in hospitalizations and disease for the near future.

Our World in Data

On February 8, 2022, Wall Street saw Pfizer and Moderna lose a collective $28 billion in market value when they hinted that mRNA vaccine sales might slump.

Moderna has already seen its share prices dip by some 70% from the peak, and Dowd is convinced once the evidence of hidden deaths, Negative Efficacy, and fraud surfaces, both stocks will crater.

“Fraud eviscerates all contracts,” explains Dowd, and the immunity from lawsuits will disappear once fraud is proven.

Dowd advises that we should not be left ‘holding the bag’ when the fraud is discovered. That means not owning these stocks on the way down as they crater and their corporations get bankrupted with lawsuits.

For the moment, it is business as usual for Pfizer and Moderna. However, as the word gets out past the censors, the silencers, and the bribers, as it slowly is doing now, it is only a matter of time until the truth becomes evident to everyone.

As Dowd says, “You can’t hide the bodies, and the bodies are piling up.”

My practice has witnessed this. Since the vaccine rollout, patients are coming down with heart attacks, aggressive cancers, and deaths in explosive numbers. My book on Cancer and Repurposed Drugs has garnered increased attention partly because of this rise.

So, I suppose we may continue to see offers of $1 million and $50,000 per month to pay off people who are bad for the vaccine business. Many, if not most, would give in to such a temptation. However, Edward Dowd and Paul Alexander cannot be bought for any price, and they are hell-bent on getting the truth out. They are bound and determined to save humanity regardless of any cost to themselves.

I wrote about this same determination in physicians like Tess Lawrie, the Conscience of Medicine, who so aptly chastised a guilt-ridden Andrew Hill for giving in to the corruption. In this Oracle Films documentary, the actual footage of Tess Lawrie’s Zoom call with Andrew Hill can be viewed.  Hill is seen looking away from the camera as Lawrie confronts his cowardice. As she remarks, “I don’t know how you sleep at night,” all Hill can do is muster a feigned smile [13:09].

Tess Lawrie is a moral giant and at the risk of financial devastation, placed our interests above her own. Please join me in supporting her new Substack as a paid subscriber. That is the least we can all do to reward those who say no to bribes.

Join Dr. Alexander’s Substack as well. Those who say no to Pfizer or Moderna, when they could have accepted millions in easy money but chose to do the right thing, are people we must support in any way we can.

We cannot allow any more deaths to occur, and we cannot allow more people to ‘hold the bag’ as Edward Dowd advises. Dowd has dedicated his life to exposing the vaccine fraud.

The true bag holders are those who have already departed, those souls who took the government and vaccine officials at their word, and who are no longer breathing. We owe it to them to hold the culprits accountable.

We owe it to them to stop this genocide now. Finally, we owe it to our children to stand up and say , “This stops NOW and with us.” We do this by continuing to speak out and calling out the truth to our fellow citizens. Everyone must awaken and become aware of what is happening.

Dr. Robert Malone said it best, “This means for all of us, that in this exceptional situation we should quite simply, keep the peace, consistently expose all the lies, and show people bit by bit, why, and by whom, they are being deceived.

When we do that, and in doing so reflect on the strength of our arguments, then we can not only solve the current problem, but possibly, achieve something much bigger, namely, use one of the deepest crises of humanity to turn around the direction of human history, and so, open the door to a new (and better) era.” 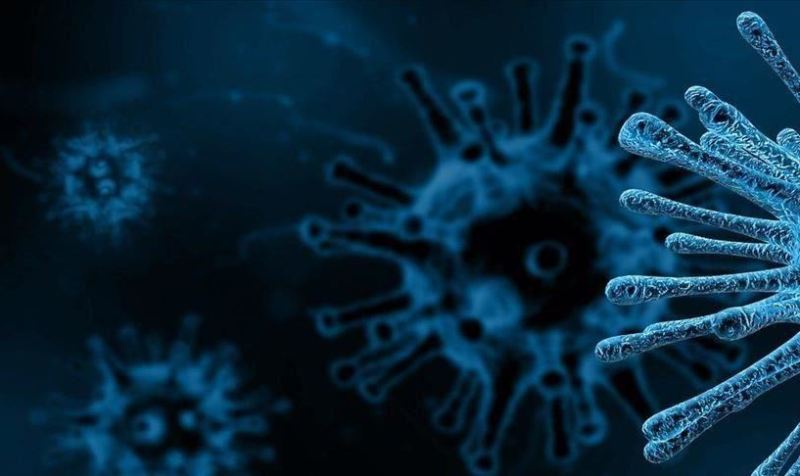