• According to a Freedom of Information/Privacy Acts (“FOIPA”) request response issued by the Department of Justice (“DOJ”), it appears there are indeed communications between Pfizer and the FBI about Project Veritas.
• The request for communications, filed by legal advocacy nonprofit Judicial Watch, was acknowledged but denied by the DOJ which cited an exemption over law enforcement proceedings.
• “The FBI has completed its search for records responsive to your request. The material you requested is located in an investigative file which is exempt from disclosure[.]” A direct quote from DOJ FOIPA response letter.
• A separate response letter from the DOJ cited “invasions of personal privacy,” as the basis for rejecting a separate, but similar, Freedom of Information Act (“FOIA”) request to the FBI.
• Project Veritas, which previously broke news stories on Pfizer over the past year, was not previously aware of “law enforcement proceedings” relating to those investigations.

[New York, New York January 18, 2022] Project Veritas has obtained Freedom of Information/Privacy Acts (“FOIPA”) response letters from the DOJ which shockingly appears to confirm that there is some level of communication between federal officials at the Bureau and pharmaceutical giant Pfizer about Project Veritas.

The letters, which were originally obtained by Judicial Watch resulting from FOIA requests made by the legal watchdog group requesting communications between Pfizer and the FBI about Project Veritas cite separate reasons for rejecting the request.
While the second letter attempts to avoid acknowledging the existence of such communications by citing “an unwarranted invasion of personal privacy,” the first response letter from the Department of Justice revealed more information.
The FBI has completed its search for records responsive to your request. The material you requested is located in an investigative file which is exempt from disclosure pursuant to 5 U.S.C. § 552(b)(7)(A). 552(b)(7)(A) exempts from disclosure:
Records or information compiled for law enforcement purposes, but only to the extent that the production of such law enforcement records or information … could reasonably be expected to interfere with enforcement proceedings…

Project Veritas previously published videos of a Pfizer scientist discussing the strength of natural COVID-19 antibodies versus the vaccine with an undercover reporter.

Then in October, Project Veritas obtained internal company documents from a whistleblower which showed admissions from Pfizer management that aborted fetal cell lines were used in the company’s vaccine program, but that employees should just stick with Pfizer’s polished narrative omitting any mention of aborted fetal cell lines to avoid any issues with the public.

Project Veritas has released the following statement on the bombshell revelation:
“It is troubling, not just that Pfizer apparently believes it can rely on the FBI to squash truthful reporting via investigations into law-abiding journalists, but also that they appear to be right in thinking the FBI will willingly target dissenting press with unconstitutional raids. There should be no place for such retaliatory attacks on journalism in America.”
About Project Veritas
James O’Keefe established Project Veritas in 2010 as a non-profit journalism enterprise to continue his undercover reporting work. Today, Project Veritas investigates and exposes corruption, dishonesty, self-dealing, waste, fraud, and other misconduct in both public and private institutions to achieve a more ethical and transparent society and to engage in litigation to: protect, defend and expand human and civil rights secured by law, specifically First Amendment rights including promoting the free exchange of ideas in a digital world; combat and defeat censorship of any ideology; promote truthful reporting; and defend freedom of speech and association issues including the right to anonymity. O’Keefe serves as the CEO and Chairman of the Board so that he can continue to lead and teach his fellow journalists, as well as protect and nurture the Project Veritas culture.
Project Veritas is a registered 501(c)3 organization. Project Veritas does not advocate specific resolutions to the issues raised through its investigations. 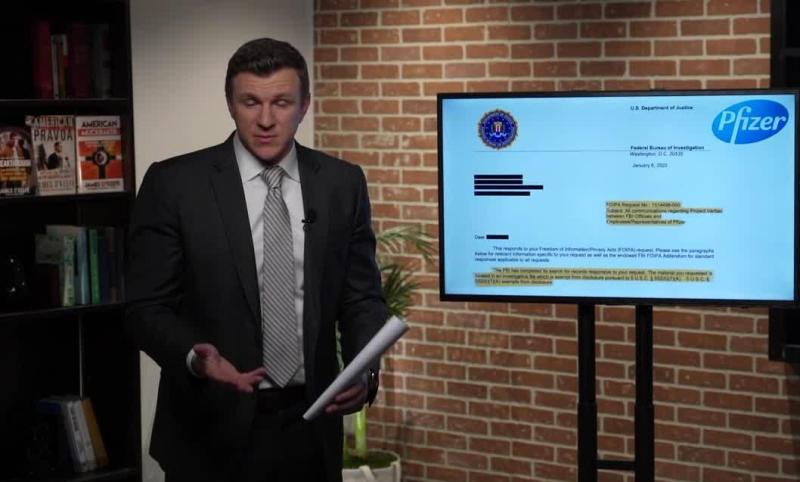 David Guyton
The narrative is coming apart; thanks to Project Veritas and a few others. Thank you for all that you do.

kuhen25
James is not just a national hero, but an international hero to all! We cannot thank you enough!!!

Christopher Williams
This is exactly why I continue to donate to Project Veritas. We need more patriots like James O’Keefe.

Jeanie Mottley
James O’Keefe should be a National hero. He is a true champion for truth and justice!

Paul Schuster
Anyone denying the flat out corruption on every level is simply not paying the slightest bit of attention.

Corinne Burque
No matter what, no matter “side”, this should concern us all. Stand strong James. We stand with you!

The Guitologist
Holy WOW. Unbelievable corruption. These people think they are above the law and above a reckoning from the plebs.

Bradley Johnson
I hope when this is all over and the REAL President takes his office back that James Okeefe gets the biggest fucking medal any American has ever received.

PrevPreviousEveryone Will Wake Up in Their Own Time, if It Doesn’t Kill Them
NextBitcoin Dips Below $40,000 During Broader Asia Market Sell-OffNext