‘This is Playing with Fire – it Could Spark a Lab-generated Pandemic’: Experts Slam Boston Lab where Scientists have Created a New Deadly Covid Strain with an 80% Kill Rate.

Boston University scientists were today condemned for ‘playing with fire’ after it emerged they had created a lethal new Covid strain in a laboratory.

DailyMail.com revealed the team had made a hybrid virus — combining Omicron and the original Wuhan strain — that killed 80 per cent of mice in a study.

The revelation exposes how dangerous virus manipulation research continues to go on even in the US, despite fears similar practices may have started the pandemic.

Professor Shmuel Shapira, a leading scientist in the Israeli Government, said: ‘This should be totally forbidden, it’s playing with fire.’

Gain of function research – when viruses are purposefully manipulated to be more infectious or deadly – is thought to be at the center of Covid’s origin.

A Chinese laboratory located just miles from the first cluster of cases carried out similar research on bat coronaviruses.

But the practice has been largely restricted in the US since 2017.

Dr Richard Ebright, a chemist at Rutgers University in New Brunswick, New Jersey, told DailyMail.com that: ‘The research is a clear example of gain of function research.

He added: ‘If we are to avoid a next lab-generated pandemic, it is imperative that oversight of enhanced potential pandemic pathogen research be strengthened.’

In the new research, which has not been peer-reviewed, a team of researchers from Boston and Florida extracted Omicron’s spike protein — the unique structure that binds to and invades human cells.

It has always been present in the virus but has become more evolved over time. Omicron has dozens of mutations on its spike protein that made it so infectious.

Researchers attached Omicron’s spike to the original wildtype strain that first emerged in Wuhan at the start of the pandemic.

The researchers looked at how mice fared against the new hybrid strain compared to the original Omicron variant.

When a similar group of rodents were exposed to the standard Omicron strain, however, they all survived and only experienced ‘mild’ symptoms.

Writing in the paper, they said: ‘In…mice, while Omicron causes mild, non-fatal infection, the Omicron S-carrying virus inflicts severe disease with a mortality rate of 80 percent.’

The researchers said it signaled that while the spike protein is responsible for infectivity, changes to other parts of its structure determine its deadliness.

‘If we are to avoid a next lab-generated pandemic, it is imperative that oversight of ePPP research be strengthened.

Prof David Livermore, a professor of microbiology at the UK’s University of East Anglia told DailyMail.com: ‘given the strong likelihood that the Covid pandemic originated from the escape of a lab-manipulated coronavirus in Wuhan, these experiments seem profoundly unwise.’

Have we learned nothing? 40 new biochemical labs that handle dangerous viruses are being built around the world

The Coronavirus pandemic has prompted a global surge in laboratories that handle dangerous viruses — despite concerns Covid may have been the result of the risky experiments.

More than 40 facilities certified as biosafety level 3 (BSL-3) or BSL-4 have either been built or have gone into construction since 2020, predominantly across Asia.

Many countries believe they were caught flat-footed by Covid and want to get ahead of the next devastating outbreak by studying pathogens that pose a threat to humans.

Experiments at these labs often involve tinkering with animal viruses to advance treatments and vaccines that could be used in a future outbreak.

But there are widespread concerns that these experiments might actually raise the risk of pandemics — something some experts believe was the case with Covid.

The virus first began spreading from a wet market in Wuhan, about eight miles from the Wuhan Institute of Virology (WIV), a high security biolab that worked with dangerous bat coronaviruses.

Scientists there worked on some of Covid’s closest relatives. They were also found to have wiped crucial databases and stifled independent investigations into the laboratory’s links to the pandemic.

Professor Paul Hunter, an expert in infection diseases at the University of East Anglia in England, told DailyMail.com he was concerned about what all the new labs would be used for.

‘The issue is what you’re going to be using [the labs] for,’ he told this website. ‘If they’re for diagnostic purposes, then you need them. But I don’t think every country needs a BSL-4.’

He added: ‘If they start having a dual purpose for research that has offensive military implications, that is the concern.’

Russia has set out its proposals for 15 of the maximum security labs and India is aiming for 18 BSL-3 and BSL-4 labs in total. The US is also adding a further highest level biosecurity lab to its existing 12.

Gain of function research was largely restricted in the US until 2017, when the National Institutes of Health began to allow it to take place using government funds.

Previously it had been halted from 2014 to 2017 over concerns that it could lead to the inadvertent creation of a pandemic.

The research involves tinkering with viruses to make them more lethal or infectious – with the hopes of getting ahead of a future outbreak.

The University of Boston refuted that the experiments are gain of function, adding that the research was reviewed and approved by the Institutional Biosafety Committee (IBC) and the Boston Public Health Commission.

A spokesperson said: ‘This research mirrors and reinforces the findings of other, similar research performed by other organizations.

‘Ultimately, this research will provide a public benefit by leading to better, targeted therapeutic interventions to help fight against future pandemics.’

While Covid is officially believed to have been transmitted from an animal to a human – likely from a bat – in a Wuhan wet market, some speculate otherwise.

The Wuhan Institute of Virology (WIV) was performing gain of function research on similar strains before the virus emerged in the city.

Some believe that the pathogen being developed in the lab infected employees, and escaped into the world as a result.

The Boston scientists were performing similar research, and looked at different strains’ effect on human lung cells that were grown in the lab.

Covid latches onto human cells with its spike protein, and instructs healthy cells to produce copies of itself.

Scientists measured how many copies each variant caused the health cells to produce.

The scientists admit the hybrid virus is unlikely to be as deadly in humans as it was in mice.

This is because the specific breed of lab mice used are very susceptible to severe Covid disease. Mice and humans also have very different immune responses to the virus.

The lab, at Boston University’s National Emerging Infectious Diseases Laboratories, is one of 13 biosafety level 4 labs in the US.

These are labs that are authorized to handle the most dangerous pathogens. There are also facilities in Texas, Atlanta and Manhattan, Kansas.

Experiments at these labs often involve tinkering with animal viruses to advance treatments and vaccines that could be used in a future outbreak.

Work on the live virus that causes Covid must be carried out at a BSL-3 or BSL-4 lab.

In BSL-3 labs, researchers do all experiments in a ‘biosafety cabinet’ — an enclosed, ventilated workspace for handling materials contaminated with pathogens.

In a BSL-4 lab, full-body, air-supplied pressure suits are worn and workers must change their clothing before entering and shower before leaving.

The lab is situated in a separate section of the building and has its own dedicated air supply.

There have long been speculation about the true origins of the virus that took over the world in early 2020.

Officially, it is believed that the virus was transmitted from a bat or similar animal to a human in Wuhan, before spreading among people.

Some believe that the virus could be man-made – with explanations ranging from the accidental to the nefarious.

The ‘lab leak’ Covid theory alleges that the virus was created via gain of function research being undertaken at the WIV.

It is feared that the virus being developed managed to infect an employee and then escape into the real world from there.

The theory for Covid was initially dismissed as conspiracy at the start of the pandemic in favor of a natural emergence.

But the hypothesis gained momentum following a series of revelations and cover-ups.

Crucial information about the earliest infected patients was wiped from the Wuhan lab’s database in late 2019 and one of its staff vanished after coming down with a mysterious flu-like illness.

Fierce debate about the origins of the Covid pandemic was reignited after two studies claimed to trace the outbreak back to a notorious animal slaughter market in Wuhan.

One shows for the first time how the earliest human cases were clustered within a small radius around the Huanan Seafood Market in winter 2019.

More precise analysis of swabs taken from floors, cages and counters track the virus back to stalls in the southwestern corner of the market, where animals that can harbor Covid were sold for meat or fur at the time.

A second study claims to have pinpointed the exact date the first animal-to-human infection occurred — November 18, 2019 — after carrying out genetic analysis on hundreds of samples from the first human carriers.

They also say they have found evidence another first generation strain was spreading at the wet market — which, if true, would place both original lineages within its walls.

Until recently, the only Covid cases linked to the market were Lineage B, which was thought to have evolved after Lineage A.

Proponents of the accidental lab leak hypothesis used this as proof the virus only arrived at the market after evolving elsewhere in Wuhan. 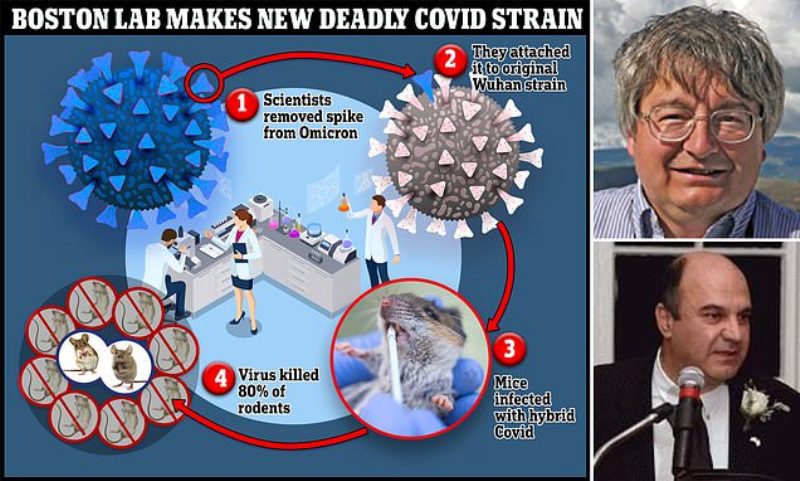 PrevPreviousTucker Carlson Responds to Zelensky’s “Christmas List”, Where the Dancing Degenerate Demanded More Money for Ukraine’s 2023 Budget
NextAustralian National Review Founder Says,”Kanye is Challenging the Jewish Owned Media. He Speaks for Many Around the World”Next