Crypto and online gambling ads as the US economy gets hollowed out at the Super Bowl.

The Super Bowl in 2000 is often referred to as the “Dotcom Bowl”, because so many buzzy new internet companies like Pets.com and AutoTrader.com bought ads that year. Ultimately, 14 such companies took part in the feeding frenzy, scooping up 20% of all available spots. Soon after, the stock price of many of these companies began to sharply deflate, and today that game is often described as the peak of the Dotcom Bubble.

Super Bowl ads have long reflected the cultural currents that deep-pocketed corporations are trying to harness in a given era. Last night, they pointed towards the powerful pull of speculation that has enraptured so many over the past few years as betting platforms and cryptocurrency exchanges flooded the air with eye-catching spots.

These ads weren’t cheap. NBCUniversal reportedly charged $7m for 30-second spots, the highest price ever. But for companies flush with cash and scrabbling for space in a lucrative and crowded market, buying one was a no-brainer.

Most went long on classic Super Bowl ad tropes, with A-list actors and athletes in campy storylines fleshed out with high-budget visuals. Caesars enlisted Halle Berry and the Curb Your Enthusiasm star JB Smoove to portray the eponymous Roman emperor and Cleopatra at dinner with Peyton Manning and his family. Crypto.com’s ad featured Lebron James time-traveling back to 2003 to give his younger self a motivational speech, implying that investing in cryptocurrency requires as much bravery as trying to make it to the NBA.

Sports betting, legalized in New York this year, was a hot topic at the Super Bowl party I attended. The first thing many people talked about when they walked in the door wasn’t who they were rooting for, but rather which players and outcomes they had money riding on. Some opted for lower-risk wagers on total points scored or quarterback yardage, while others placed complex multi-leg parlays with potential payouts in the thousands. These weren’t hardcore gamblers: like many in New York, they had recently begun placing casual bets on big games using apps like FanDuel and DraftKings. Nobody won any big jackpots, though a friend bagged $80 on a bet that the Los Angeles Rams star Odell Beckham Jr would score the game’s first touchdown.

While several of the sportsbooks have been advertising at the national level for a while, this Super Bowl felt like a coming-out party for the exchanges. Four of them bought ads: EToro, Crypto.com, CoinBase and FTX. Some people nicknamed the contest “the Crypto Bowl”.

“I can no longer really tell the difference between buying cryptocurrencies or betting on sports or trading stocks,” wrote Jay Caspian Kang in the New York Times last week. “The narratives have all converged into one mega-gamble with payouts that could change your life.”

The most unexpected celebrity to appear was Larry David, who starred in a spot for the exchange FTX. In a statement, the exchange’s CEO, Sam Bankman-Fried, wrote the ad was about “embracing skepticism”, given that “a lot of people who are now the biggest advocates of crypto once had significant reservations.”

Coinbase skipped stars and plotlines altogether, sending a colorful QR code bouncing around the screen, recalling screensavers from the Windows 95 era. The code sent viewers to the app’s website, which promptly crashed.

It’s hard to judge anyone looking for a quick score right now, given that soaring housing costs and college debt have left the American dream out of reach for so many young people. And placing a wager on a game can certainly intensify the viewing experience. But there’s something malevolent about how these ads deployed beloved figures and ironic kitsch to market a business model that’s more predatory than anything ever seen in Super Bowl ads, save perhaps cigarettes and the United States military. Legalized gambling will inevitably turn some casual bettors into addicts, while the crypto boom will eventually leave a generation of suckers holding the bag.

These ads insinuated some kind of fundamental hollowing-out of the economy: instead of boring old goods and services, these companies hawk the opportunity to play slots at a virtual casino. Money is the product. Expensive visual effects and familiar faces couldn’t entirely mask the great sucking sound of a cultural and financial vacuum.

At the moment, crypto exchanges and sportsbooks offer an attractive proposition for the investors pushing their valuations into the stratosphere. But consider Wile E Coyote: he zooms off a cliff and continues into thin air for a glorious instant, defying gravity through sheer desperation. Then he looks down, realizes he’s run out of road, and plummets into the abyss. A similar fate may be in store for today’s dominant online asset class, fueled upwards by the vaporous dreams of the downtrodden. 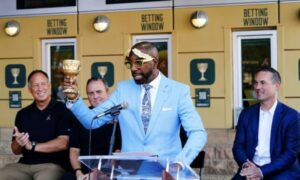 PrevPreviousOntario Declares State of Emergency, As GiveSendGo Defies Order To Withhold Donations to Truckers
NextPfizer’s Clinical Trial Data – 31% of Vaxxinated Either Died or Had Permanent DisabilitiesNext