Gold Vs Bitcoin and Their Role in Portfolios

Gold Vs Bitcoin and Their Role in Portfolios Despite the major price crash that Bitcoin has endured in 2022, it has still delivered a meteoric price rise since inception. That price rise has is the major selling point cryptocurrency advocates use in their attempts to illustrate the role Bitcoin can supposedly play in diversified portfolios.

Some even go so far as to argue that Bitcoin is a more useful asset to hold than gold, even though the latter has hundreds of years of history of performance through every market cycle, has a market size measured in the many trillions, is highly liquid, and has a multi-decade track record of delivering both;

Bitcoin is yet to meaningfully display these characteristics.

Nevertheless, those crypto advocates arguing for the inclusion of Bitcoin in diversified portfolios typically run statistical analysis looking at the returns and volatility of Bitcoin, and of other more traditional assets since Bitcoin was launched.

They then make a case that Bitcoin’s returns are so good that, despite the aforementioned unprecedented volatility, risk-adjusted returns for diversified portfolios will be improved if some money is allocated to Bitcoin.

Analysis like this has been published in the market for some time now, with the image below sourced from an article published in January 2018. It shows the performance of USD $1,000 invested between August 2010 and October 2017 in two hypothetical portfolios; 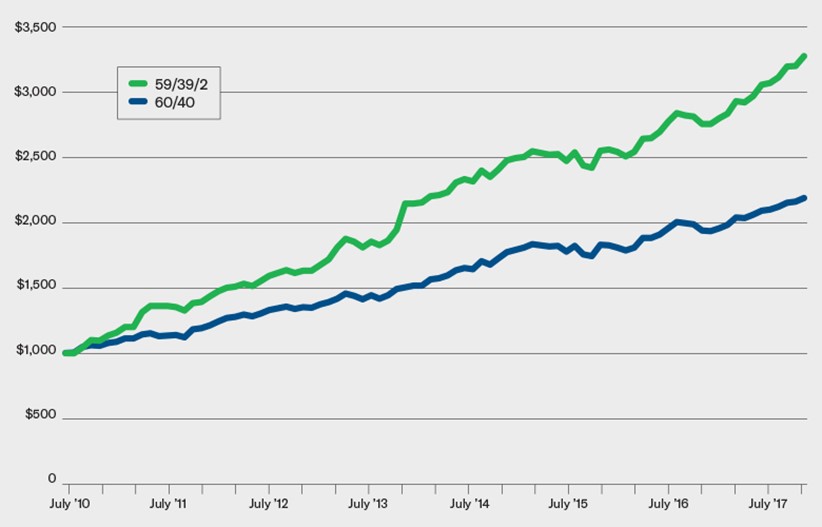 The green line is much higher, ergo the case for holding Bitcoin as part of a portfolio is clear right?

We remain unconvinced, for a number of reasons, including the following;

Bitcoin is not even 15 years old. Up until the COVID-19 pandemic, it had only existed in a market environment characterised by

Given this, it’s too early to know how Bitcoin will perform in periods of more elevated market stress, with the recent spike in its correlation to equity markets (by Q2 2022 it had a 30-day correlation of 0.8 to the NASDAQ), suggesting its diversification benefits are questionable at best.

The cryptocurrency market remains largely unregulated, with serious concerns regarding exchange reported trade volumes, reserve backing and governance surrounding the stablecoins that dominate cryptocurrency trading, as well as protection and effective ring-fencing of investor assets. This has obviously been exacerbated by the recent collapse of FTX.

Bitcoin didn’t first reach a market capitalization of USD $200bn (which is about the value of one year of current global gold mining output) until late 2017. It then fell below this level in 2018 after a major price crash and did not meaningfully climb back above this level until late 2020, less than 2 years ago.

As an example, best estimate suggest the market value of Bitcoin in August 2010 (when the chart above begins), was only a few million dollars.

Given how small it has been for the majority of its life, it’s far too early for pension funds or institutional investors to draw any meaningful conclusions about its expected future performance, or the role it can play in a portfolio, based on price movements to date.

This point becomes even more relevant when one factors in points 1 and 2 above.

Last but not least, Bitcoin’s extreme price volatility makes it a hard asset to include in a portfolio.

Indeed, if one attempted to hold Bitcoin in a portfolio, its huge price increases relative to traditional assets would see its “share” of a total portfolio increase substantially at times, and the portfolio would outperform. That’s in essence what the chart above shows.

While that is great, there is a flip side to the coin. Bitcoin price crashes would then see its “share” of a total portfolio shrink, with the portfolio massively underperforming in such circumstances.

Visualising Bitcoin’s impact on a portfolio

The analysis starts at the end of 2014, and runs through to the end of 2021, and is based purely on price data, ignoring taxes, transaction costs etc. 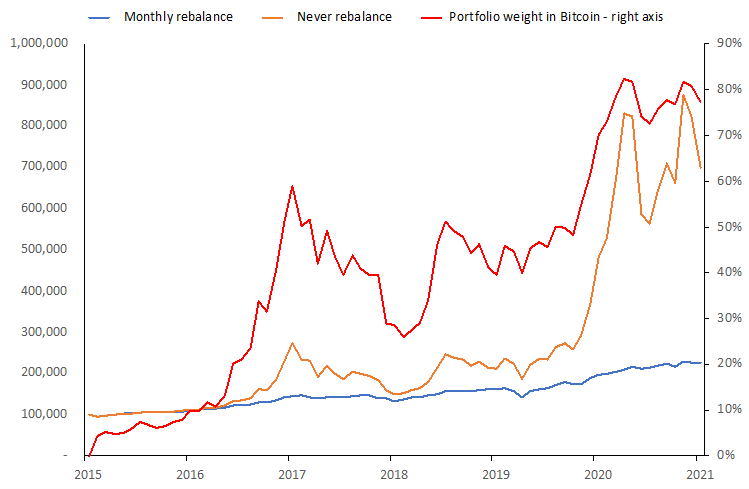 But it’s clear that the portfolio that never rebalances its Bitcoin exposure is the clear winner, with a $100,000 investment growing to almost $700,000. That result is largely driven by the rise in the Bitcoin price from below USD $500 to more than USD $45,000 per coin during the time period studied.

However, to “enjoy” this gain, you’d have had to allow your Bitcoin exposure as a share of your total portfolio to grow from 5% at the start, to more than 80% at its peak in late 2021.

Does this mean no one should buy Bitcoin?

That is not the argument that we are making per se, noting of course that ABC Bullion can’t offer financial advice.

Just because it’s too early to say whether or not an asset can play a role in a diversified portfolio of assets, it doesn’t mean the asset itself is uninvestable.

Instead, it means that investors might be better served treating their allocation to Bitcoin (should they make one) as being separate to, or ‘on the side’ of their portfolio.

So, in the example above where someone had $100,000 to invest, rather than trying to model their portfolio with a 5% allocation to Bitcoin, and rebalancing holdings in shares, bonds and Bitcoin based on movements between the three, they might be better served managing a $95,000 portfolio of traditional assets.

They could then treat the $5,000 Bitcoin investment as entirely separate if they decided they wanted to buy it.

Unlike Bitcoin, gold has a very long track record, having gone through multiple market cycles. The gold market is also very large, and highly liquid, turning over more than USD $100bn per day, as we alluded to earlier in this article.

It has also helped improve risk adjusted returns for investors over many years, due to both the strong long-term returns it has delivered in its own right, and the fact its typically negatively correlated to risk assets during periods equity markets fall fastest.

Given this background, a much more convincing case can be made that gold can play a strategic role in a diversified portfolio, something we highlight in our regular educational updates at ABC Bullion. 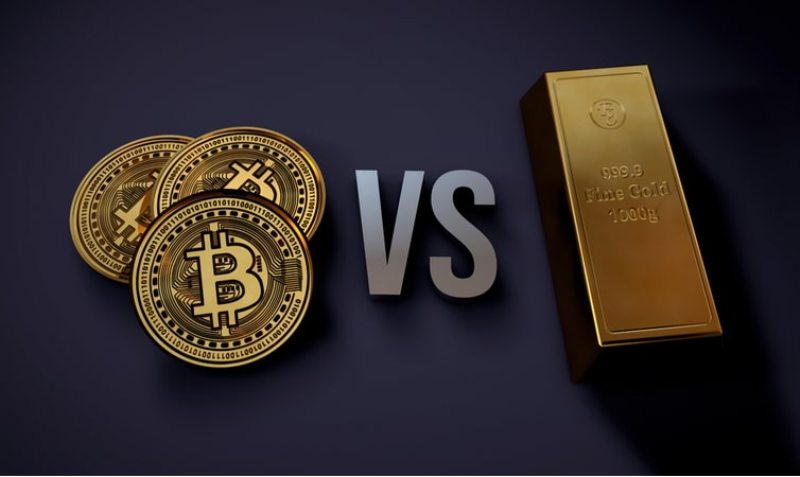