Bitcoin and cryptocurrency prices have suddenly surged after a tumultuous week for crypto traders.

The bitcoin price has added around 7% over the last 24 hours, while ethereum, Binance’s BNB, Ripple’s XRP and dogecoin have climbed between 5% and 10%—pushing the combined crypto market value up by $200 billion since Wednesday.

Bitcoin can help the social media giant move faster in terms of its product expansions and is the “best candidate” to become the “native currency” of the internet, Dorsey said, speaking on Twitter’s second-quarter earnings call.

“If the internet has a native currency, a global currency, we are able to move so much faster with products such as Super Follows, Commerce, Subscriptions, Tip Jar and we can reach every single person on the planet because of that instead of going down a market-by-market-by-market approach.”

Meanwhile, online retailer Amazon is looking to hire a digital currency and blockchain expert, according to a recent job posting.

“You will leverage your domain expertise in blockchain, distributed ledger, central bank digital currencies and cryptocurrency to develop the case for the capabilities which should be developed, drive overall vision and product strategy, and gain leadership buy-in and investment for new capabilities,” the posting, first reported by Insider, read.

“We’re inspired by the innovation happening in the cryptocurrency space and are exploring what this could look like on Amazon,” the spokesperson said. “We believe the future will be built on new technologies that enable modern, fast, and inexpensive payments, and hope to bring that future to Amazon customers as soon as possible.” 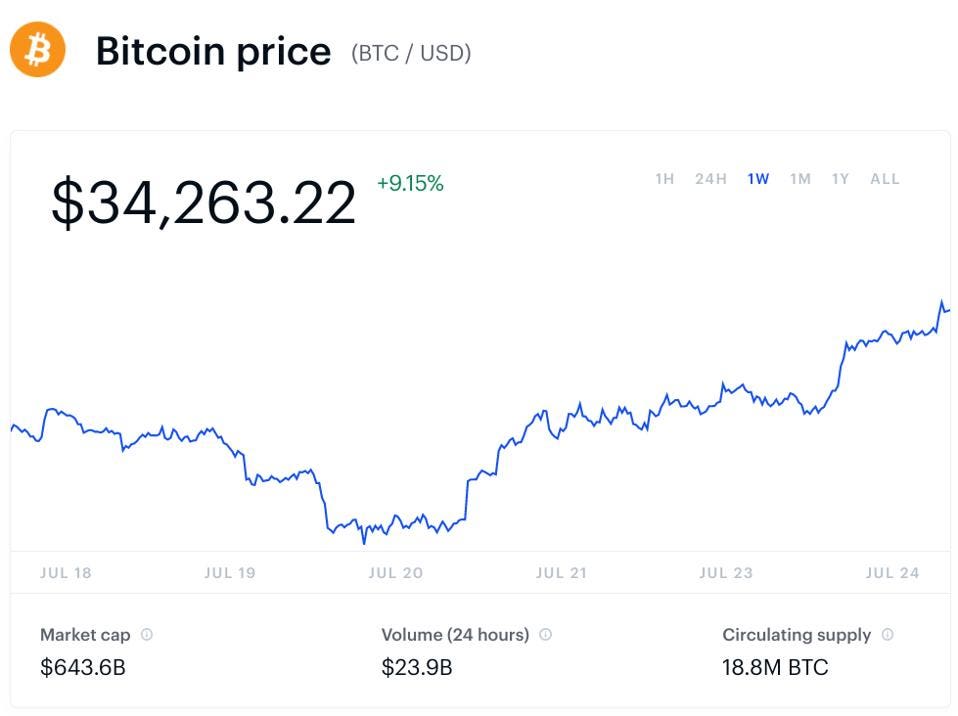 “I might pump but I don’t dump,” Musk said, revealing his rocket company SpaceX has joined Tesla in holding bitcoin while he personally holds some of ethereum’s ether tokens. The meme-based dogecoin, adopted by Musk as a pet project in recent months, soared along with ethereum during the hotly-anticipated event after Musk elaborated on ideas he’d previously floated to combine dogecoin with ethereum to “max transaction rates and lower transaction costs.”

Bitcoin and cryptocurrency prices have struggled since a sell-off through April and May that wiped more than $1 trillion from the combined crypto market’s value.

All of the top ten most valuable cryptocurrencies, including ethereum, Binance’s BNB, cardano and XRP, are down by more than 50% since their recent highs, with dogecoin off by over 70% since its early May peak.

Bitcoin and crypto market watchers have cheered the bitcoin price rebound, with investors heartened by the $30,000 per bitcoin support more-or-less holding.

“Bitcoin started the week on a somber note but managed to climb back above the $32,000 mark,” Pankaj Balani, the chief executive of the Singapore-based crypto derivatives Delta Exchange, said in emailed comments.

“In the last couple of weeks, we have seen a lot of negative news flow and strong selling pressure on bitcoin. Despite the weak sentiment and weakness in the global markets bitcoin held the $30,000 support. Bitcoin did slip below the $30,000 mark but the bears failed to push it further below and we are seeing a healthy bounce thereafter. For the first time in many weeks we are seeing bullish signs here and expect bitcoin to head towards the upper end of the $30,000 to $40,000 range.”

PrevPreviousMaybe the World Needs To Divide Into 2
NextNew Evidence About PCR Tests Will Blow Your Mind!Next