Steve will be speaking with former New York Times reporter Alex Berenson, who successfully sued Twitter to restore his verified account. A first in social media history.
Dr. PierreKory joins the Q&A segment.
Also on the show will be Michael Kane with Teachers for Choice to update us on New York City mandates. 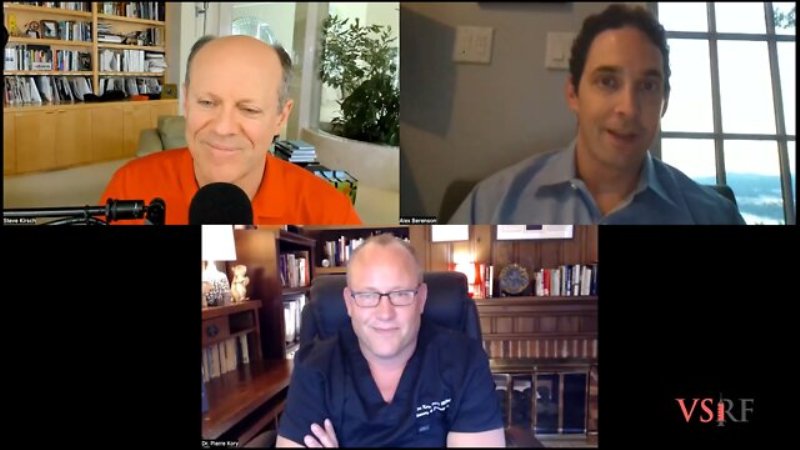 Suesviews
Thanks Pierre for being so gracious. It must be very difficult to be civil in the face of such ignorance.

Marmocet
After having seen Berenson debate Dr. Kory here, I finally think I might have figured out how Berenson arrived at his position on ivermectin. I’ll bet all he did was notice that those who were touting the drug were saying things about it that sounded just like what the vaccine evangelists were saying about the vaccines, and since he had already worked out that the vaccines weren’t the safe and effective silver bullets that were going to put an end to the pandemic that they were hyped up to be, he simply assumed the same would prove to be the case for ivermectin too. Once he went public with his position about ivermectin and received heat for it from his readers, his massive ego refused to let him budge from it, or to look at any of the growing mountain of data showing that in fact, unlike the vaccines or any of the expensive on-patent drugs approved by the FDA, ivermectin really is highly effective at treating covid.

DrSheftall12
Doctors aren’t muzzled. They are just cowards. They’re putting their bank accounts ahead of the lives of innocent children. One of the most disgraceful aspects of the last two years. If enough doctors had spoken up no one would have gotten the vaccines. I explained why the vaccine wasn’t going to block transmission in December before they came out and confirmed that I was right in mid-January. People started catching on in April Fauci and Walensky were still saying the virus blocked spread 7 months later., in August. It was absurd. I explain all of it- the stupid, the evil and the cowards- in my book “Heroes and Villains: The COVID-19 Book of Lists”, coming out in three weeks. I name names. It’s a bloodbath.

Rickjsports
They need to call Berenson out for what he is. A fraud. To give him any credibility at all while he skirts questions and give vague answers on Ivermectin is a joke. It is obvious he is a profiteer trying to walk a line to maximize profits to stay in business. While Kory and others have risked their medical careers bringing the truth to the public.

UzhasKakoi
Steve, Alex lost a ton of subscribers a few times over. First, when he baselessly attacked Dr. Malone. Alex’s subscribers asked him to back up his assertions and Alex IGNORED the requests. Second time, Alex just threw in a “study” which attacked Ivermectin. Again his subscribers asked him to discuss studies faulty methodology and data. Again, Alex just IGNORED. The third time Alex lost a ton of subscribers was when he asked people for money for the Twitter lawsuit, promising to not settle and publish the discovery. Then he’s done precisely opposite, settling his Twitter lawsuit. Even his staunchest defenders admitted and canceled.
Alex is not honest debater. PERIOD.

Skybright77
Fantastic episode, guys! I couldn’t wait to see Pierre debate Alex, who deserves credit, since most ivermectin-sceptics would never dare to debate Pierre or any other expert on this. Pierre “won” this hands down, of course. So pleased you mentioned World Ivermectin Day (happening this Saturday) and the brilliant Dr Tess Lawrie and the World Council for Health. Keep up the good work Steve and Louisa.

Janicen11j
Alex has decided to take a couple studies and believe them and ignore the dozens of others. You could tell he made a stake and won’t change. The fact that he believes Pavloxid is possibly useful but totally discounts a better protease inhibitor is curious.

Millers5
In Australia also, doctors have been banned from discussing immune boosting & infection protocols, such as those of the FLCCC, or discuss their concerns about the safety of ‘vaccines’ under threat of suspension or cancellation of licence. Ivermectin prescription has also been banned. It’s an absolute disgrace that the government & it’s bureaucratic health bodies have injected themselves between doctors & their patient. Our government is still pushing boosters, even though it’s very, very obvious that they do not work e.g. cruise ships of ‘fully vaccinated’ passengers, only to end up with hundreds of passengers getting infected.