Jessica Rose’s research based on VAERS and DMED data shows a huge increase. Published technical papers say there is no effect. Who do you think is telling the truth?

I was on Stew Peters show earlier today (Rumble) talking about miscarriages.

We know that any substance consumed by pregnant women can be deadly to the baby. Big pharma ads don’t let us forget it, nor do the thousands of mothers working tirelessly in social media groups to inform each other about the things that can kill their kids.

When it comes to Dr. Fauci’s unholy clot shot, even the New York Times has admitted that vaccinated women are experiencing a chaotic menstrual cycle, and post-menopausal women have even started their periods again.

The original study I was referring to in the video interview is here. That was the data that the CDC had at the time they recommended pregnant women get jabbed. In short, they had very incomplete data. What the CDC did was unethical.

In the interview, I discuss what the DMED data and VAERS data said. For more on this, see my article on spontaneous abortions after vaccination.

COVID vaccines and pregnancy: >416,186 spontaneous abortions due to the vaccine

A new analysis by Dr. Jessica Rose estimates the number of spontaneous abortions caused by the COVID vaccines. It’s over 416,186 to date. I’ve notified the CDC, but I don’t expect to hear back.

Basically, using rate data recently released from the Department of Defense, she computes an under reporting factor (URF) for VAERS for spontaneous abortions is 118. Since there are 3,527 reports of SA in the US in 2021, this represents 416,186 actual events. But a small number of those were not caused by the vaccine, somewhere around 1%.

The sanity checks both pass

Now, let’s do a “ballpark” sanity check on the VAERS numbers. In DMED, SAs after vax were 3.4X the baseline rate. In the US there are around 750K miscarriages per year. So if we multiply that by 3.4 and assume that 20% of the women were vaccinated within the first or second trimester (where the effect is largest), we get 510K which is not far from our VAERS estimate of 416K.

Our second sanity check is the URF of 118. We’ve determined before a URF for the most serious adverse events at 41. For less serious events, especially ones that nobody thinks is caused by the vaccine and is often many months from vaccination is easily 3X higher. So that makes sense as well.

I’ve notified the CDC of this, but I don’t expect them to change their policy of recommending the vaccine to pregnant women.

I don’t expect the mainstream media to question the CDC on this at all. I’m sure they will all ignore it.

Plenty of evidence in VAERS showing the vaccine messes with a woman’s reproductive organs just as we predicted from the biodistribution data (which targeted the ovaries).

You can view both the biodistribution data and the menstrual adverse effect data in this VAERS analysis article I wrote in November, 2022.

For others, may I suggest if you disagree with this that you show us an error in the data or methodology?

Note that other papers that came out recently do not find a signal.

Receipt of mRNA Covid-19 Vaccines and Risk of Spontaneous Abortion

Pregnant persons are at risk for severe coronavirus disease 2019 (Covid-19), and infection with severe acute respiratory syndrome coronavirus 2 (SARS-CoV-2) during pregnancy is associated with increased risks of preterm birth and other adverse maternal and neonatal outcomes. Although spontaneous abortion (pregnancy loss occurring at less than 20 weeks of gestation) is a common pregnancy outcome affecting 11 to 22% of recognized pregnancies (see Table S1 in the Supplementary Appendix, available with the full text of this letter at NEJM.org), data to inform estimates of the risk of spontaneous abortion after receipt of an mRNA Covid-19 vaccine either before conception (30 days before the first day of the last menstrual period through 14 days after) or during pregnancy are limited.

Risk of Spontaneous Abortion among Participants in the v-safe Covid-19 Vaccine Pregnancy Registry, December 14, 2020, through July 19, 2021. 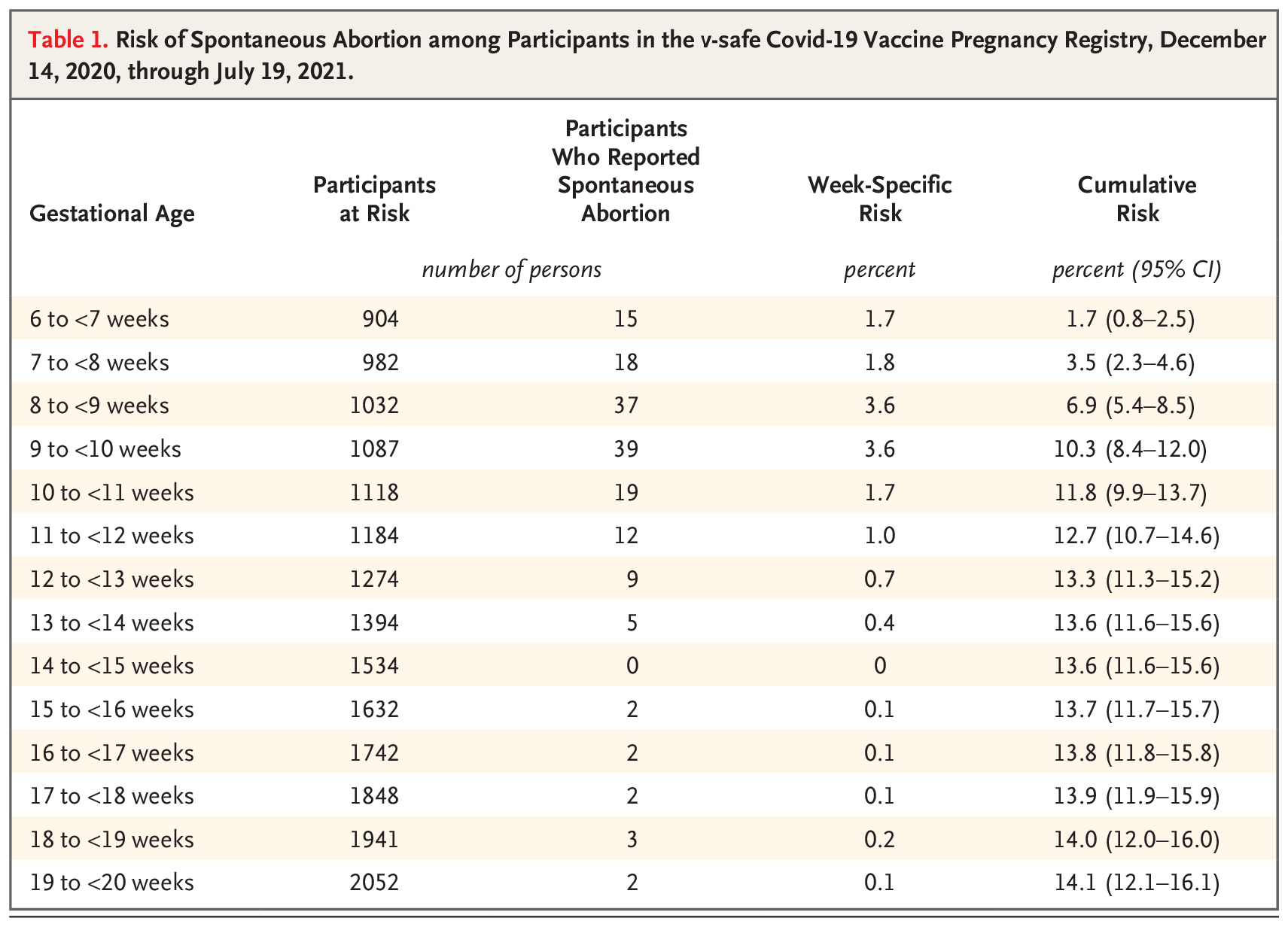 As compared with data from two historical cohorts that represent the lower and upper ranges of spontaneous-abortion risk, the cumulative risks of spontaneous abortion from our primary and sensitivity analyses were within the expected risk range (Figure 1). Limitations of our study include the lack of a control group of unvaccinated pregnant persons, the homogeneity of the participants in terms of racial and ethnic groups and occupation, the voluntary enrollment of the population, and the use of data reported by the participants themselves, including some data collected retrospectively. Nonetheless, our findings suggest that the risk of spontaneous abortion after mRNA Covid-19 vaccination either before conception or during pregnancy is consistent with the expected risk of spontaneous abortion; these findings add to the accumulating evidence about the safety of mRNA Covid-19 vaccination in pregnancy.5

Disclosure forms provided by the authors are available with the full text of this letter at NEJM.org.

The findings and conclusions in this letter are those of the authors and do not necessarily represent the official position of the Centers for Disease Control and Prevention (CDC). Mention of a product or company name is for identification purposes only and does not constitute endorsement by the CDC or the Food and Drug Administration. The authors do not have any material conflicts of interest.

We can’t both be right so you will have to decide who you want to believe.

If you are having trouble deciding, read this article by Colleen Huber.

I compare the abortion efficacy rate of the COVID vaccine with the morning-after pill, RU-486, aka mifepristone.  The V-Safe Surveillance System was developed by the CDC V-Safe COVID-19 Pregnancy Registry Team for monitoring of the COVID vaccination program in pregnancy.  In their Preliminary Findings, there were 827 pregnant women who received at least one dose of either the Pfizer or Moderna COVID vaccine, and who then had “a completed pregnancy.”  A completed pregnancy was defined to include live-born infant, spontaneous abortion (miscarriage), still birth, induced abortion or ectopic pregnancy.

Their reported results were as follows for 827 completed pregnancies following COVID vaccination:

* 96 of the 104 pregnant women who had spontaneous abortions were vaccinated before 13 weeks gestation.

The morning-after abortion pill, mifepristone, has a reported efficacy rate of 80% to 90%. Mifepristone has a black box warning. Therefore, because the two drugs demonstrate comparable abortion potential, they should both carry black box warnings, fully informed and uncoerced consent, and should be strictly avoided by the general population. These data may be corrected up or down by following COVID-vaccinated pregnant women till the end of 40 weeks of expected duration of gestation for all of the pregnant women included in the study.