The injection is being manufactured, not by Moderna, but by a relatively new company – National Resilience – that has received hardly any media attention, despite its overt links to US intelligence. 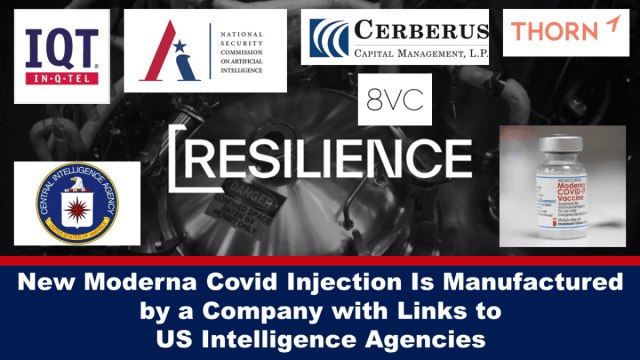 Last week, the United Kingdom became the first country to approve Moderna’s reformulated version of its Covid vaccine.  Bivalent Spikevax, which is claimed to target “two strains of the virus,” was approved by the UK’s Medicines and Healthcare Products Regulatory Agency (“MHRA”) with the support of the UK government’s Commission on Human Medicines.

Bivalent Spikevax combines the previously approved Covid injection with a “vaccine candidate” targeting the Omicron variant BA.1. That vaccine candidate has never been previously approved and has not been the subject of independent study. The MHRA approved the vaccine based on a single, incomplete human trial consisting of approximately 800 participants currently being conducted by Moderna. The study has yet to be published in a medical journal or peer-reviewed. No concerns have been raised by any regulatory agency, including the MHRA, regarding Moderna’s past history of engaging in suspect and likely illegal activity in past product trials, including for its original Covid “vaccine.”

Unlike Moderna’s original Covid injection, the genetic material, or messenger RNA (mRNA), for this new “vaccine,” including the newly formulated genetic material meant to protect against the Omicron variant, is being manufactured, not by Moderna, but by a relatively new company – National Resilience – that has received hardly any media attention, despite its overt links to US intelligence.

In pursuit of those goals, the company announced it would “actively invest in developing powerful new technologies to manufacture complex medicines that are defining the future of therapeutics, including cell and gene therapies, viral vectors, vaccines, and proteins.” It was founded with the reported intention “to build a better system for manufacturing complex medicines to fight deadly diseases” as a way to improve post-Covid “pandemic preparedness.”

In April 2021, National Resilience acquired Ology Bioservices Inc., which had received a $37 million contract from the US military the previous November to develop an advanced anti-Covid-19 monoclonal antibody treatment. This acquisition also provided National Resilience with its first Biosafety Level 3 (BSL-3) laboratory and the ability to manufacture cell and gene therapies, live viral vaccines and vectors and oncolytic viruses.

Despite being in the earliest stages of developing its “revolutionary” manufacturing capabilities, National Resilience entered into a partnership with the Government of Canada in July of last year. Per that agreement, the Canadian government plans to invest CAD 199.2 million (about US$154.9 million) into National Resilience’s Ontario-based subsidiary, Resilience Biotechnologies Inc. Canada’s Minister of Innovation, Science and Industry, François-Philippe Champagne, asserted at the time that the investment would “build future pandemic preparedness” and help “to grow Canada’s life science ecosystem as an engine for our economic recovery.”

In an interview with The San Francisco Business Times, Resilience CEO Rahul Singhvi stated that Resilience is looking to fill its massive manufacturing plants with “technologies and people that can set and apply new standards for manufacturing cell therapies and gene therapies as well as RNA-based treatments.” Before Resilience, Singhvi was CEO of NovaVax and an operating partner at Flagship Pioneering, which played a major role in the creation and rise of Moderna.

Singhvi has further insisted that National Resilience is “not a therapeutics company, not a contractor and not a tools company” and instead aims “to boost production using the new therapeutic modalities” such as RNA-based treatments, which have become normalised in the Covid-19 era. Whereas contract manufacturers “are like kitchens, with pots and pans ready for any recipe,” “what we’re trying to do is fix the recipes,” Singhvi has explained. One member of Resilience’s board of directors, former FDA Commissioner and Pfizer Board member Scott Gottlieb, has described the company as seeking to act as the equivalent of Amazon Web Services for the biotechnology industry.

Essentially, Resilience bills itself as offering solutions that will allow “futuristic” medicines, including mRNA vaccines, to be produced more quickly and more efficiently, with the apparent goal of monopolising certain parts of the biomanufacturing process. It also appears poised to become the manufacturer of choice for mRNA vaccines and experimental therapeutics in the event of a future pandemic.

Given that we now live in a world where government regulatory decisions on the approval of medicines are increasingly influenced by corporate press releases and normal regulatory procedures have fallen by the wayside, there is likely to be little scrutiny of the genetic material that Resilience produces for the “medicines of tomorrow.” This seems to be already true for Moderna’s recently retooled Covid “vaccine,” as there has been no independent examination of the new genetic sequence of mRNA used in the Omicron-specific vaccine candidate or its effects on the human body in the short, medium or long term.

Resilience was co-founded by Biotech venture capitalist Robert Nelsen, who is currently chairman of the board.  He was one of the earliest investors in Illumina, a California-based gene-sequencing hardware and software giant that is believed to currently dominate the field of genomics.

As mentioned in a previous Unlimited Hangout investigation, Illumina is closely tied to the DARPA-equivalent of the Wellcome Trust known as Wellcome Leap, which is also focused on “futuristic” and transhumanist “medicines.”

Nelsen is also co-founder and managing director of ARCH. ARCH previously funded Nanosys, the company of the controversial scientist Charles Lieber. Harvard University’s Lieber is the second researcher to be tried on accusations of hiding ties to China since 2018 when the US Department of Justice launched its China Initiative to root out threats to national security.

However, while Nelsen has been given much of the credit for creating Resilience, he revealed in one interview that the idea for the company had actually come from someone else – Luciana Borio.

In July of last year, Nelsen revealed that it was while talking to Borio about “her work running pandemic preparedness on the NSC [National Security Council]” that had “helped lead to the launch of Nelsen’s $800 million biologics manufacturing start-up Resilience.” At the time of their conversation, Borio was the vice president of In-Q-tel, the venture capital arm of the Central Intelligence Agency (“CIA”).

Borio is currently a senior fellow for global health at the Council on Foreign Relations, a consultant to Goldman Sachs, a member of the Bill Gates-funded vaccine alliance CEPI, and a partner at Nelsen’s venture capital firm ARCH Venture Partners, which funds Resilience.

Around the time of her conversation with Nelsen that led to Resilience’s creation, Borio was co-writing a policy paper for the Johns Hopkins Centre for Health Security that recommended linking Covid vaccination status with food stamp programs and rent assistance as a possible means of coercing certain populations to take the experimental “vaccine.

Drew Oetting, another member of Resilience’s board, works for Cerberus Capital Management, the firm headed by Steve Feinberg who previously led the President’s Intelligence Advisory Board under the Trump administration.

Cerberus is notably the parent company of DynCorp, a controversial US national security contractor tied to numerous scandals, including scandals related to sex trafficking in conflict zones. Oetting is also part of the CIA-linked Thorn NGO ostensibly focused on tackling child trafficking that was the subject of a previous Unlimited Hangout investigation

Oetting is also the co-founder of 8VC, a venture capital firm that is one of the main investors in Resilience. 8VC’s other co-founder is Joe Lonsdale and Oetting “started his career” as Lonsdale’s chief of staff. Lonsdale is the co-founder, alongside Peter Thiel and Alex Karp, of Palantir, a CIA front company and intelligence contractor that is the successor to DARPA’s controversial Total Information Awareness (TIA) mass surveillance and data-mining program. In addition, Oetting previously worked for Bill Gates’ investment fund.

Also worth noting is the presence of Joseph Robert Kerrey, former US Senator for Nebraska and a former member of the conflict-of-interest-ridden 9/11 Commission, on Resilience’s board. Kerrey is currently managing director of Allen & Co., a New York investment banking firm which has hosted an annual “summer camp for billionaires” since 1983.

Allen & Co. has long been a major player in networks where organised crime and intelligence intersect, and is mentioned repeatedly throughout Whitney Webb’s upcoming book One Nation Under Blackmail.

Would you allow an untested “vaccine” manufactured under the direction of the people above to be injected into you?